Home > Long Reads > Would you rather own a dog… or dragon?

Would you rather own a dog… or dragon?

A CARDIFF resident was given a bearded dragon to take care of when friends of hers left to live in South Africa.

Rachel Peach, 41, who worked seven years in the navy before deciding to take a course in animal studies, lives with her two dogs, Dreck and Diesel, three cats, her son William, 13, and has recently taken a bearded dragon into her house on Keppoch Street, Roath.

Mrs Peach said: “We decided to call her Smaug from the Hobbit, which is one of my son’s favourite films and also because we couldn’t think of another dragon name.

“They are social animals, and like to climb everywhere. They are called bearded dragons because of the beard they have, which becomes darker and bigger when they are frightened or stressed. It makes them look bigger.

“I feed her with leafy greens and at the moment she has fresh watercress, mint, basil, celery and a bit of cooked butternut squash. Every two or three days I give her hoppers or crickets and occasionally worm meals.

“William absolutely loves her. I was not able to pick up a lizard before doing the course, now I’m fascinated by all these exotic animals.”

Smaug was bred in captivity and is now five years old but she could live another 10 years.

But which pet would you prefer? Are you a lover of traditional pets like a dog or something more exotic?

dog, dragon, pets, poll, vote
You may also like 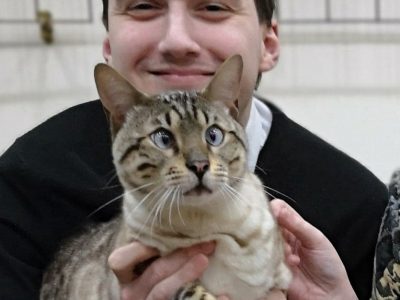 The Bengal of Barry: The cat that’s never lost
About Post Author