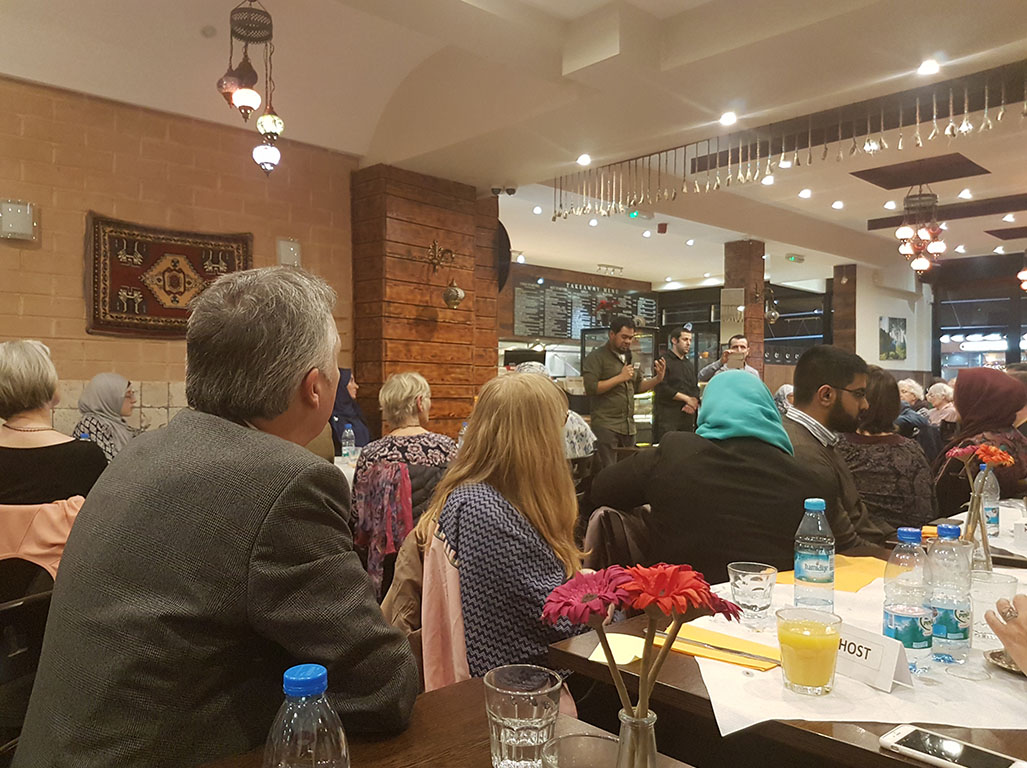 MORE than 100 people from different backgrounds attended an event designed to challenge people’s perceptions about Muslims living in Wales.

The dinner and discussion entitled Can Muslims be British? included speeches, spoken word poetry and a question and answer session. It was hosted last week by the Muslim Council of Wales at Saray’s Restaurant, City Road.

The organisation regularly holds interfaith events and works closely with mosques and charities across Wales.

Mohammed Alamgir, director of projects for MCW, said events like this were a way for people to explore identity and what it truly means to be Welsh and Muslim.

He said: “Given the current political climate, we felt it would be appropriate to have an event entitled Can Muslims Be British? because Muslims are always questioned as whether they can adhere to their religious beliefs and be British at the same time.

“You would never hear anyone ask ‘Can you be Christian and British?’ I can define Islam very easily to you. It’s based on certain principles, morals, conduct and behaviour in which we use in our lives.

Many people at the event felt that such gatherings were essential, particularly in response to Donald Trump’s presidency and his enforcement of a travel ban from some Muslim countries.

Marie Pritchard, a student at Cardiff University and a member of Student Action For Refugees (STAR) said that the rise of the far-right in the US has raised concerns for many people.

She said: “The rise of groups like Britain First has become quite dangerous, because they’ve got over a million likes [on Facebook]. They just made things up and people believe them.

“I feel that the best way to stop views like that becoming too commonplace is to educate yourself. You can’t rely on someone else to educate you, you have to get out there on your own.”

The event was hosted by Mr Alamgir and the Rev Aled Edwards, chief executive of Cytûn, an organisation which aims to unite churches across Wales in worship.

Mr Edwards said events such as this were much needed and key to understanding one another.

He said: “The important thing is we tell the outside world that we’re friends and that the dialogue between Muslims, Christians and other faiths is very normal.

“Most of us feel strongly about the Muslim ban. It is seen as being unlawful, unconstitutional. But more significantly, we see it as being inhumane.

“The joy of tonight was that we could sit down together, share friendship and share very good food. We could listen to people’s words and poetry. It was a brilliant evening.”

Angela Graham, a journalist and documentary maker, said:  “I grew up in Northern Ireland, so I know what it’s like when relations between people of different denominations go wrong.

“What we’re seeing in America is a lot of evidence of fear, which often makes people retreat from challenges. You have to face fear and go beyond the things that separate us from one another.

“Meeting people of faiths that are different to your own means you encounter new ideas. It’s very worthwhile to meet people who are not like yourself because you discover what it’s like to work together and you’re enriched as a person.”

Hanan Issa, a writer and spoken word poet said that events like this were slowly changing people’s perceptions on Muslims, particularly in areas of Wales with very little diversity.

She said:  “We did a very similar event at a philosopher’s society in Monmouthshire. It’s was just so lovely to get together with different kinds of people, some of whom have never met a Muslim before in their lives.

“It gave them the opportunity to ask any questions and voice their concerns. It helps to remove some of the stereotypes that they once had.

“I’m mixed race. My mother is Welsh and my father came here from Iraq. Identity is something that I have struggled with and questioned for most of my life.

“I experienced an incident at the age of six. I lived in a predominantly white area and I got into a fight with a young boy. His mother told me that I wasn’t allowed to hit him because I was ‘black’ and had ‘filthy black hands’.”

Mr Alamgir said the MCW aimed to hold events like this across Wales, so that different communities could experience the benefits of interfaith discussions.

He said: “We want to take what we’ve done to where there’s less densely populated Muslim areas like Merthyr, Bridgend and the wider Valleys community.

“It’s about bringing cross sections of the community together to talk about different topics. Our work is to bring people together to build social cohesion and strengthen relationships that are already there.”