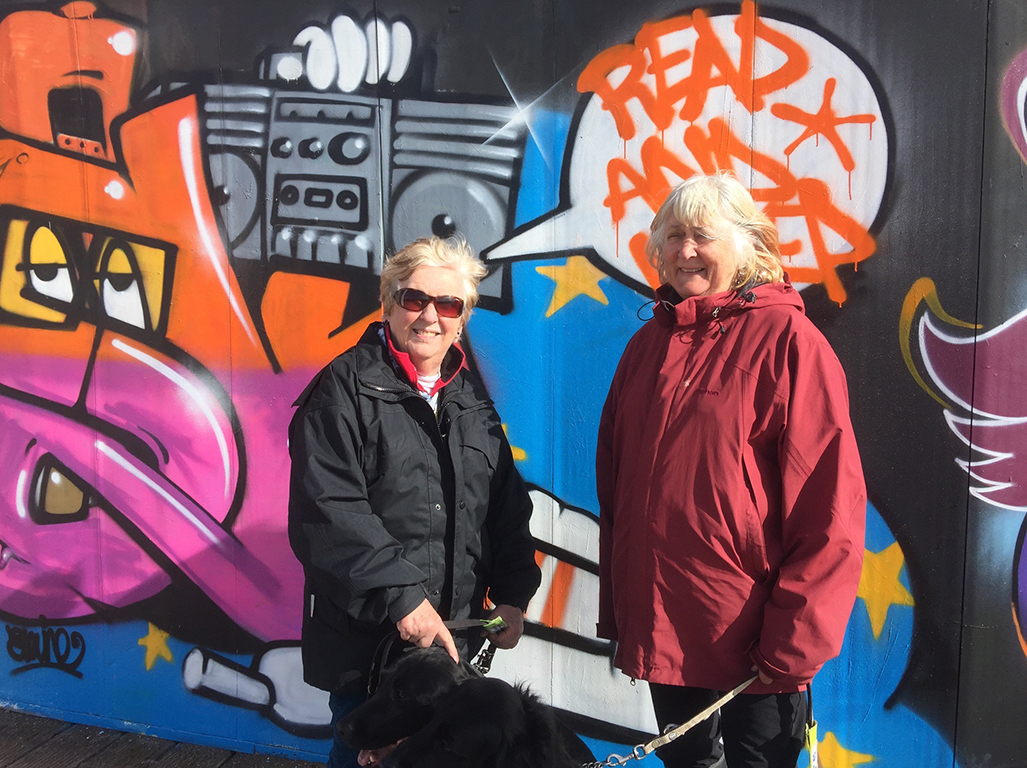 AN ARTIST has started a petition to stop the council removing the iconic “Graffiti Hall of Fame” on the Millennium Walkway to make way for advertising.

Amelia Thomas, from Tongwynlais, is petitioning Cardiff Council to save the wall of graffiti by the Principality Stadium in the centre of the city. The ground will play host to the Champions League final in June, and the space is a prime location for advertising.

“This space is important to graffiti artists from South Wales and Cardiff in particular because it is a place to come and paint safely and legally. It is central so people from all over Cardiff can meet up and paint together and for the wider residents it is a place where they can learn about graffiti culture,” said Ms Thomas, who has worked as an artist in Cardiff for over 10 years.

Ms Thomas was commissioned by the council to complete a piece of artwork on the walkway in 2015 for the Grow Wild campaign, a project which aimed to create community art inspired by nature.

“I met some really nice people from the council who then let us paint further down the boards which hadn’t been painted for 12 years,” she said.

However, she said she started the petition because she felt the council had not included the artistic community in discussions about the future of the space.

“What I would like to see is for the council to recognise this is a very important cultural location for Cardiff and any decisions made about this area really need to include the people who are benefitting from it,” she said.

The petition was posted online on Sunday and it has already gained more than 750 signatures.

Kieron Jones, 44, owns Oner Signs in Cardiff, the first graffiti store in Wales. He has been a graffiti writer since 1983 and painted a piece on the wall to celebrate the Welsh football team’s achievement in last year’s European Championship.

“People who pass by and see the paintings are always interested and interact with the graffiti artists. As far as I can see this is massively important and I have never heard anybody say they don’t like it or that it is an eyesore,” he said.

He added: “It is very nice of the council to give us the opportunity to paint the wall but it would be a huge shame to lose it to advertising space.”

Sophie Barras, 42, is an artist based in London who lived in Cardiff for 20 years. She painted a memorial on the boardwalk in March last year to commemorate the life of friend and fellow artist Elen Mai Wyn Jones. A detail from Sophie Barras’ memorial to her friend Elen Mai Wyn Jones.

“We used to do some art installations together. She passed away very suddenly and I was not able to go to her funeral so I wanted to do something to say goodbye. Her family have been in touch to say they were pleased to see it was there,” said Ms Barras.

Asked about the council’s plans, she said: “I think it is a really stupid idea. The city is full of billboards with corporate messages. There are very few spaces for graffiti artists to go and paint legally. It is a place of free speech to allow people to say what matters most to them and I think taking that away would be a terrible mistake.”

A spokesman for Cardiff Council said: “It was agreed that the Millennium Walkway could be used as a legal street art wall for a short period of time. This area will be used to publicise the UEFA Champions League final in the week prior to the match on June 3 and we are looking for an alternative location for the artists and will continue to work with the promoters on this.”

The council said it was unable to confirm at the present time if the wall would be used for advertising before or after the week running up to the Champions League final.

What do people in Cardiff think of the plans? Anne Chidgey (left) and Jo Powell visit Riverside market next to the graffiti wall every Sunday.

Jo Powell, 65 and Anne Chidgey, 72, visit the Riverside market every Sunday, which is close to the boardwalk.

Mrs Powell, from Drope, said: “It’s very well done and very colourful. They [the artists] are very talented. We have been here when the guys are doing it and they don’t cause any trouble. It’s fantastic art.”

Mrs Chidgey, from Victoria Park, said: “There’s too much advertising in the town already and something like this, people will talk about it. It’s a focal point.” David Rowlands-Mellor, 51, from Roath, said: “As long as there is no filthy language it is fine by me. It is better than advertising. It [the advertising] would get spoiled by the kids. They would be annoyed they could not do the graffiti and they would paint over it.” Catherine Niglas, 29 and Zach Pepper, 29, were visiting friends in the city.

Ms Niglas, from London, said: “It’s a good opportunity for people to be creative, and legally. There is enough advertising going on as it is but I imagine they [the council] will say that the funds will go back into the community.”

Mr Pepper, also from London, said: “I really like it. There is not a lot of free space and this is not doing any harm. It is a safe space.” Marta Grasso and Allegra Coccolo, both from Venice, are students studying English in Cardiff.

Ms Grasso, 17, said: “I think it is very beautiful because here there is the river so it is different to see this type of modern thing next to nature.”

Ms Coccolo, 17, said: “We saw it from the bus and we came here just to see this. It will attract tourists like us.” Lorna Jones, 44, and husband David Jones, 48, were visiting family in Cardiff for the weekend.

Mrs Jones, from Porthleven, Cornwall said: “Are there not other places they can put advertising? We are already surrounded by it. It is all about money isn’t it?

Want to see what the whole wall looks like? Take a look at our slide show…

Graffiti art outside the Principality Stadium