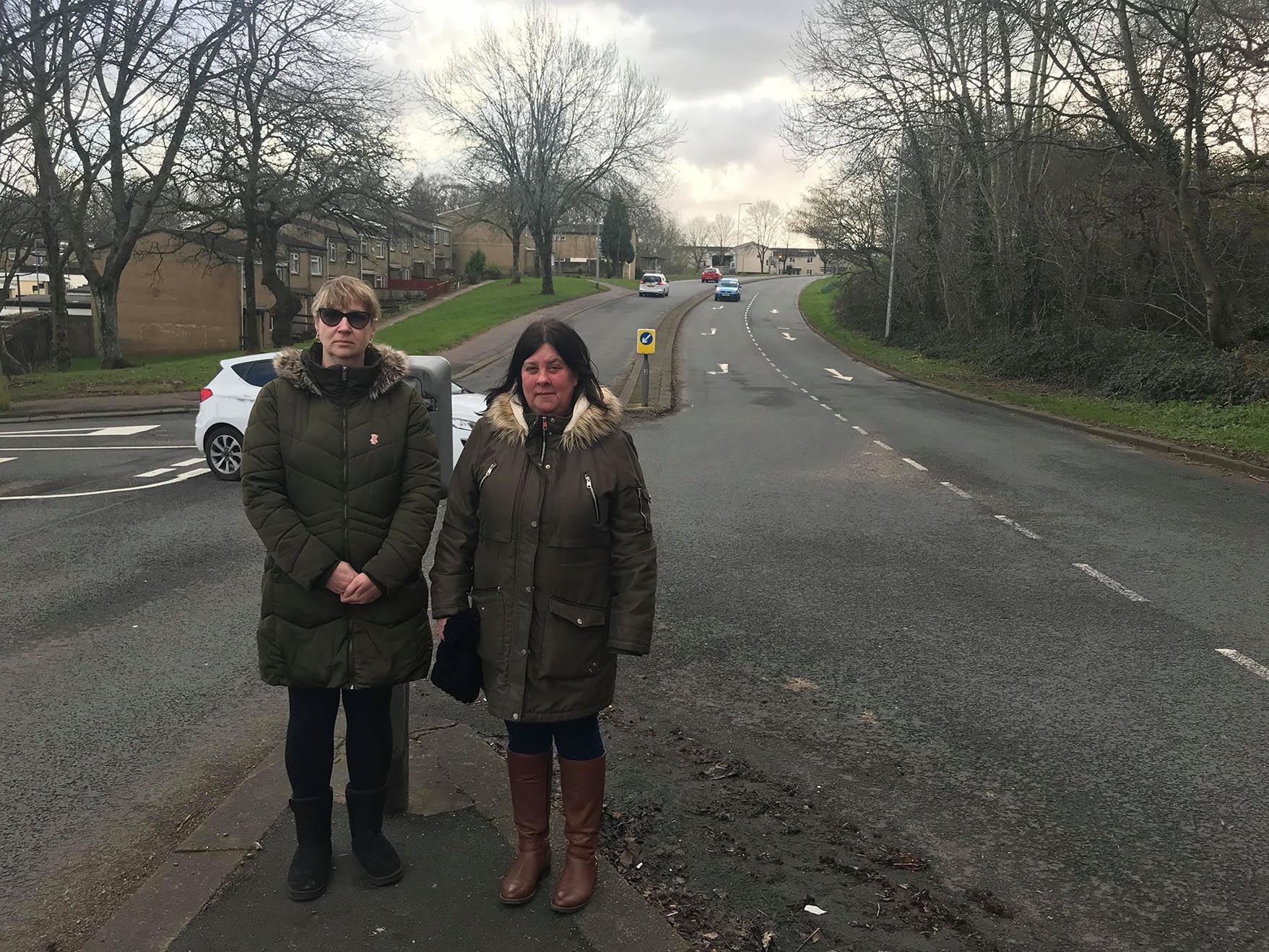 A PETITION to make the junction at Pentwyn Drive and Glyn Coed Road safer has been submitted to Cardiff Council with 1,000 signatures.

Sarah Stevens, 41, and Marie Morris, 48, of Wern Goch East, started the petition after there were three accidents in one week last year.

Mrs Morris’ partner, Michael Cody, 54, from Brynfedw, was in a crash on November 27.

“He was in the front passenger seat getting a lift home from work. They were driving down the hill, when a van turning right went into them'” she said.

“He was stuck in the car for over three hours waiting for an ambulance, because there were four traffic accidents in Cardiff that day.

“The traffic was chaotic here, and they had to divert everyone.”

Mrs Steven’s husband was involved in another incident the same week.

“The car he was driving behind was struck by a bus that had turned right in front of it. The woman driving was in a terrible state,” she said.

The junction at Wern Goch has two lanes allowing traffic to continue straight in both directions and two for cars from either direction turning onto Pentwyn Drive.

The speed limit on Glyn Coed Road is 30mph. White arrows and dashed lines are drawn on the road, with signposts at the junction directing traffic, although some of these are faded.

“I’ve phoned 999 so many times for other crashes out there, particularly at school times. At 3.30pm it’s horrendous with everyone trying to rush home,” said Mrs Morris.

“I’ve phoned the schools, taxi company and bus services to warn them not to come when there’s been a crash, to try and reduce the traffic,” she said.

Mrs Stevens said the number of accidents was increasing.

“When we had those three accidents in six days, we thought enough is enough, something’s got to be done.

“We got in contact with our councillors, and within 24 hours there was a petition online,” she said.

Mrs Morris and her daughter knocked on doors and collected over 250 signatures. Almost 1,000 people have signed on Change.org.

Marie Driscoll, 42, of Cottingham Drive, signed after her daughter, Evie, 19, had an accident last summer, driving from Circle Way.

Mrs Driscoll said: “She was turning right, and an oncoming car smashed into her. She says it was like it came from nowhere.

She suffered whiplash and shock, and both cars were badly damaged.

Mrs Stevens wants the council to consult the residents.

“They are going to end up with blood on their hands. I understand there’s a lack of funding, but something has to change.

“People accelerate down the hill, and try and beat the traffic lights at the other end. It is only a matter of time before there’s a fatality there.”

Mrs Morris said: “We need something: even if it’s a permanent stop line, temporary traffic lights, or a yellow box painted on the road.

“If you go past the Maelfa, onto Llanedeyrn Drive, you’ve got five zebra crossings. What have we got?

“There’s a primary school on the other side of the road. They’ve got the crossings outside the school, but none elsewhere to actually allow the children to get to school safely.”

The petition was submitted to Cardiff Council last week.

Joe Carter, Liberal Democrat Councillor for Pentwyn and Llanedeyrn said: “When you drive at that junction, you take your life into your own hands.

“We hope that road safety officers can visit to see what solutions can be found. A roundabout could potentially solve the problem, or more road markings to show who should give way.

“We want the petition to make the council see sense,” he said.

Cardiff Council has not yet responded.