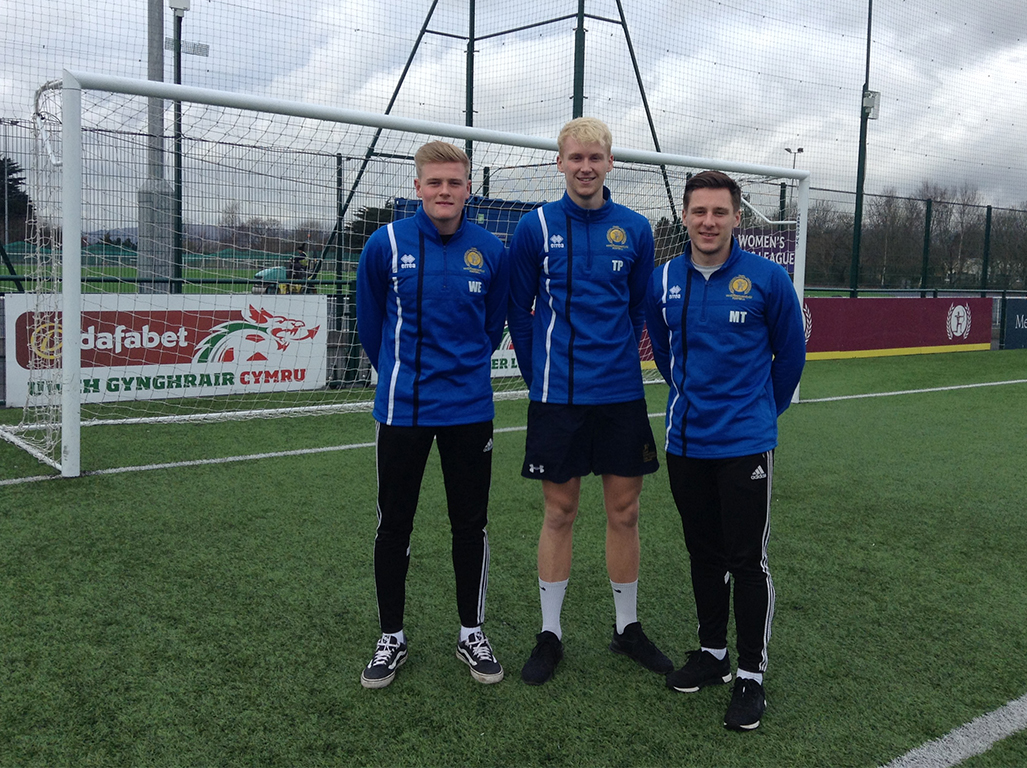 Cardiff Met Uni FC players (from left) Matt Taylor, Tim Parker and captain Will Evans, who are looking forward to the final of the BUCS Championship.

CARDIFF Met men’s football team are one win away from being crowned the best university side in the UK.

For the first time in their history, the Cyncoed club have reached the final of the BUCS Championship, following a 2-1 win against city rivals University of South Wales on Wednesday.

“Even before a ball is kicked in the final, we are the most successful Cardiff Met BUCS side ever. It’s something to put on the resumé,” said captain Will Evans, 19, from North Wales.

Cardiff Met were 1-0 down at half-time in the semi-final but second half goals from Tim Parker and former England schoolboy Matt Taylor were enough to seal their place in the history books.

“It was a very physical game. USW look to bully teams out of matches and have it their way. But our boys were up for it. We beat them at home in the league and we decided we had to match that,” said Evans, who played for Shrewsbury Town as a junior.

“What I find mind-blowing is that we have such a young team. On Wednesday, our starting team had one fresher, seven second years and three third years. Most teams we play are full of postgrads doing Masters,” he said. Captain Will Evans, 19, revels in the record-breaking achievement of his charges.

Standing between Cardiff Met and the prestigious BUCS trophy will be Northumbria University. The final takes place in Bath on Wednesday, March 22.

“We know nothing about Northumbria but it’s the same for them, which levels the playing field. Mind you, they will probably look at us in the league, coming fourth, and think ‘we have got a chance here’,” said Evans.

However, like Cardiff Met, Northumbria have never won the men’s BUCS championship.

Evans is excited at the prospect of the final in two weeks’ time but is quick to make clear the debt of gratitude his team owes to previous Cardiff Met sides.

“We would never be in this position if it weren’t for the players before us. They made this club what it is, really. They had to play on poor pitches and in difficult conditions at times. They grew this club — they put meat on the bones,” he said.