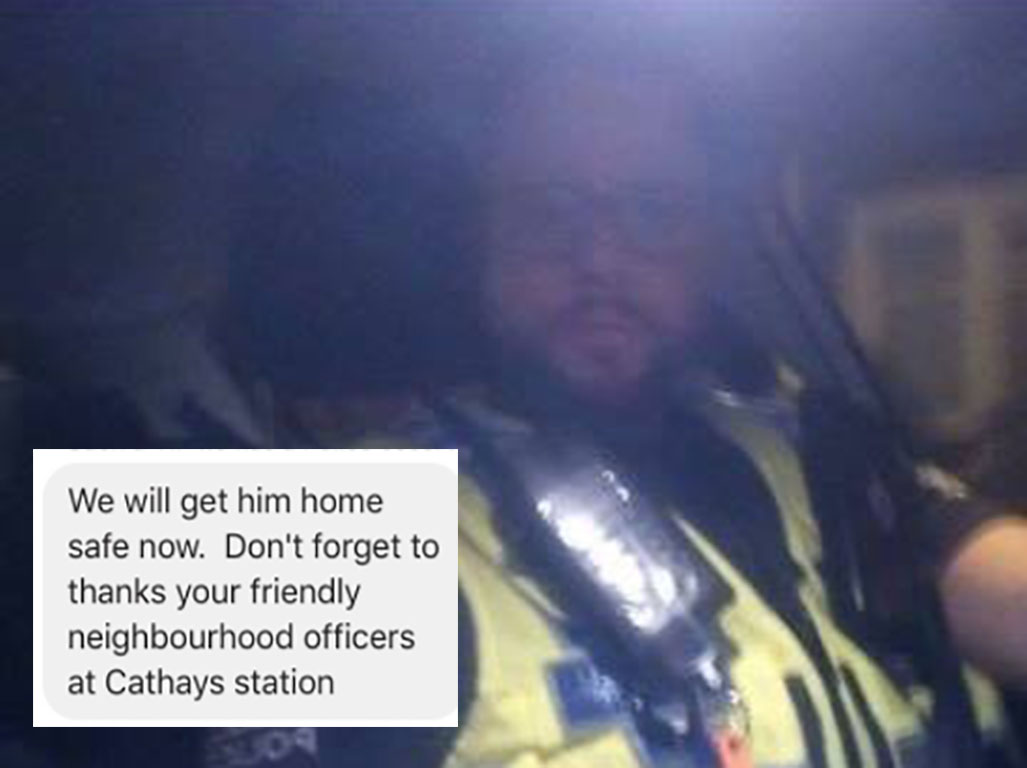 A POLICE officer had to Facebook a group of Cardiff students to work out where to drop off their drunk housemate. And when they didn’t believe who he was, the officer sent them a selfie. After being refused entry to the Students’ Union on Monday night, human geography student Cameron, 20, needed the help of South Wales Police to get home.

“I’ve definitely learnt my limit,” said Cameron. “I don’t think I will ever get that drunk ever again.”

Officers decided to give the student a lift to his shared house in Cathays, what should have been a five-minute walk away.

Unfortunately, Cameron had forgotten where he lived, so the officers from Cathays police station took to Facebook to find out.

“Hello it’s the police on Cameron’s phone. He is very drunk and we are dropping him home. He does not know what number he lives on,” messaged the officers.

Lawrence Court, 20, who is friends with Cameron and witnessed the Facebook conversation between his housemates and the police officer. “Cameron had a few too many drinks during pre-drinks and was refused entry,” said Mr Court.

“Naturally we didn’t believe it was the police but after the selfie came through we were hysterical.”

After finding out the address, the police officer messaged: “We will get him home safe now. Don’t forget to thank your friendly neighbourhood officers at Cathays station.”

“I think it’s brilliant, it gives you another side to the police force and you don’t often see them as being a laugh,” said Mr Court.

Mr Court decided to screenshot the conversation with the local police officer and post the pictures on Twitter. That tweet now has over 23,000 retweets and 71,000 likes.

Mr Court decided to screenshot the conversation with the local police officer and post the pictures on Twitter. That tweet now has over 23,000 retweets and 71,000 likes.

“I don’t think any of us ever expected to go viral,” said Cameron. “It’s a strange feeling. I never thought the world would know about my drunken antics.

“My parents haven’t picked up on it yet but my sister has and she thought it was really funny. I’m planning on telling them when the hype dies down.

“I got loads of messages from people I know after the tweet went viral, They all thought it was really funny.

“I haven’t had the chance to speak to the police officer yet, but it would be great to meet him to thank him for getting me back in one piece.”

The police officer who helped Cameron make his way home has not been identified yet by South Wales Police, but they did post on Facebook earlier to give an update on the situation.

“Our digital savvy PC is off for a few days, but we will unveil who he is when he’s back and get his take on things,” posted South Wales Police.