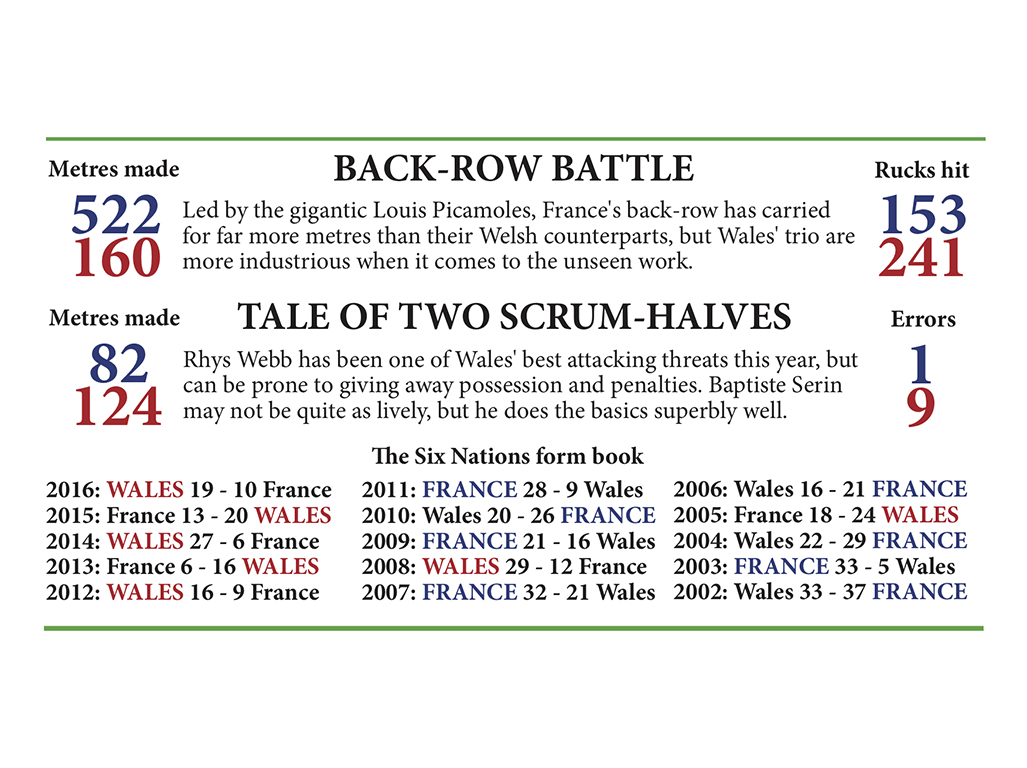 Between 1975 and 1999, Wales never won in Paris. But then they wowed the rugby world with three thrilling wins in quick succession. Here is the story of those wins.

IT had been 24 years since Wales had last triumphed in France’s capital. Graham Henry’s men travelled to the brand new Stade de France having lost their first two matches of the tournament, and they were all but written off. How wrong the pundits were.

The mercurial French fly-half Thomas Castaignede missed an easy penalty in the early moments — an omen of what was to come for the euphoric Welsh support. In contrast, the normally reliable Neil Jenkins missed four penalty attempts of his own but was successful with five others, while even he bought into Wales’ sense of adventure that day.

Colin Charvis’ try after a scything break by Rob Howley gave Wales the lead before tries from Émile Ntamack made it 18-16 to the home side after half an hour. But Wales led 28-18 at half-time after Dafydd James and Craig Quinnell (finishing off an 80-metre team effort) scored a try each in a devastating two-minute salvo.

France pulled it back to 28-28 in the second-half, and took the lead when Ntamack’s hat-trick try cancelled out another Jenkins penalty. Castaignede missed the conversion, but when Jenkins had another attempt from the tee after a Castaignede high tackle, he made no mistake and Wales led 34-33.

France’s maverick fly-half was given one final chance to kick his side to victory, but was wide of the target yet again. Wales had secured an historic victory.

TWO years after Wales had stunned the world with a scintillating victory in Paris, they pulled off the same trick.

After deservedly falling 19-9 behind in the first half an hour, Rob Howley scored a superb solo score from his own 22 to drag Wales back into the game.

The Welsh fightback continued into the second-half, with tries from Scott Quinnell and Dafydd James and the boot of Neil Jenkins (including one monster drop-goal) putting them 33-22 up after 54 minutes.

After the Welsh ebb came the French flow. A try from Philippe Bernat–Salles and the kicking of substitute Christophe Lamaison saw France regain the lead.

But, as was so often the case for Wales at the turn of the millennium, fly-half Jenkins turned the game in their favour. First, he slotted a second drop-goal to make it 36-35 to Wales.

Then, in injury time, Stephen Jones dived on loose French ball before Howley kicked in behind the French defence. Bernat-Salles’s miscued chip  was charged down by Gareth Thomas, and the ball found its way to Jenkins via James giving the Pontypridd man the simplest of run-ins. Jenkins converted his own score to make it 43-35, and soon after the game was up.

Jenkins had gone through the card in a 28-point haul, passing 1,000 points for Wales and the Lions in the process. After hanging up his boots, Jenkins became the Wales skills coach – a role he still holds today (Credit: National Assembly for Wales)

AFTER a blip in 2003, Wales returned to their winning Parisian ways en route to their first Grand Slam in 27 years.

Wins over England and Italy in the opening rounds meant Wales travelled to France with higher hopes than in previous year where they had unquestionably been the underdog.

However, the underdog tag was reinstated in a first-half were France were sensational, scoring tries through Dimitri Yachvili and Aurélien Rougerie in the first 15 minutes and leading 15-6 at half-time.

Mike Ruddock elected not to cajole his team into life during the interval, but the silent treatment did the trick. Whereas in previous years it had been the ginger-haired Neil Jenkins to whom Wales owed their victories, this time it was his former Pontypridd teammate and hair-sake, Martyn Williams.

Within one minute of the restart, Stephen Jones waltzed 60 metres upfield. The ball made its way out to Shane Williams who jinked outside the French defence before offloading back inside to the man known affectionately as “Nugget”, giving the flanker the easiest of run-ins.

Minutes later, he struck again. Wales were awarded a penalty on the French line and Williams’ quick tap caught France napping, and he hauled himself over in the corner. Suddenly, Wales were 18-15 up.

A Frederic Michalak drop-goal brought France level, but a penalty from Jones and a drop-goal of his own gave Wales a 24-18 lead that they would never relinquish.

Ruddock’s side went on to beat Scotland and Ireland in the final two weekends, and the most thrilling of Grand Slams was secured.

CAN Wales make it four famous victories in Paris? Here is the statistical lowdown on Wales v France.