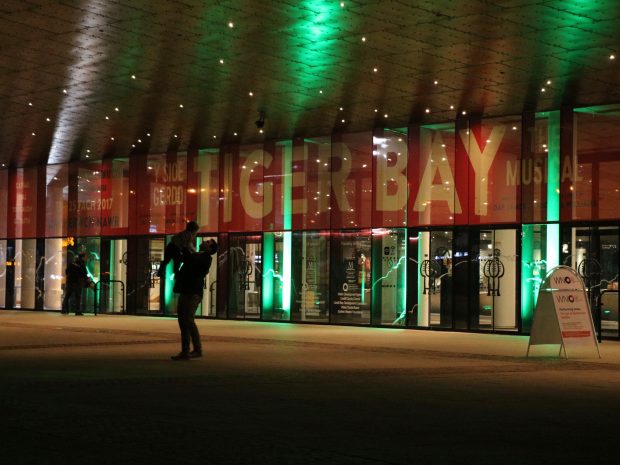 “Down the docks in Tiger Bay, a revolution brews today”

THE latest musical to come out of Wales Millennium Centre’s production company may not ignite a revolution, but certainly shows huge ambition for only their third original show, following Only the Brave and the Mandela Trilogy, both in 2016.

The 44-strong cast and 15-strong orchestra of Tiger Bay The Musical began filling an expansive set with 30 songs – some musical cliché, others deeply poignant – right from the moment the lights dim on the Robert Gordon Theatre stage.

The gloomy expanse of a ship’s hull emerges out of a grey canvas, and does well to transport the audience back in time to Cardiff’s prime: booming industry, melting-pot multiculturalism, and social strife boiling over.

Set in the early-1900s, we meet Themba Sibeko (Dom Hartley-Harris) newly arrived from South Africa to forget his marred past. He finds work in the docks under harbourmaster Seamus O’Rourke (Noel Sullivan), who Themba suspiciously recognises from his past life. The Marquess of Bute (John Owen-Jones) is desperately searching for the son of his long-lost love, while his poorly-paid dockworkers battle for their jobs with arriving African immigrants.

Along with a fantastic troupe of “Waterboy” children (with echoes of Oliver Twist) all with their own misfortunes, the characters’ stories mould together over issues of love, loss and revenge.

From musical director Daf James’ impressive score, songs Shadowland and Taste of Home have classic musical qualities that generate real emotion from the cast and an at-times tearful audience.

At the end of Act One, the Waterboys and the Marquess of Bute find themselves sharing a touching moment over one of the great agonies of life. Many John Owen-Jones aficionados – he is well-known for playing the Phantom of the Opera, and Jean Valjean in Les Miserables onstage – would probably leave disappointed by what is an incredibly ensemble performance, and his moderate time in the spotlight.

“The intention of Tiger Bay is to tell our own story,” says producer Maris Lyons, and reflecting the tight-knit community of Tiger Bay through an ensemble-focused performance was a great opportunity to do that.

However, in its visual appeal and epic-ness Tiger Bay does at times stray from a clear plot that hits like The Phantom of the Opera and Les Miserables enjoy. The plot is there, but constant repetition of “Down the docks in Tiger Bay” and the “Bay-ite” chorus breaking out into tribal African-dances distracts the audience from following the narrative.

Outside the theatre doors in the red-lit façade of the Millennium Centre, the cultural extravaganza of Tiger Bay does not leave your sight. Merchandise, posters and Tiger Bay Beer are everywhere. The show has initiated a celebration of a largely untold past with some fantastic stories to tell.

At three hours long, Tiger Bay is a cumbersome tale of all these stories, and before it reaches its West-End goal there will be some necessary fine tuning and cuts to give it a sleekness to appeal to the mainstream of theatre-goers.

With a decent refinement, this showcase of the history and the lives of Tiger Bay will fulfil WMC managing director Matthew Milsom’s aim to “Inspire Our Nation, Impress the World”, and give Tiger Bay The Musical a future in the British musical songbook.