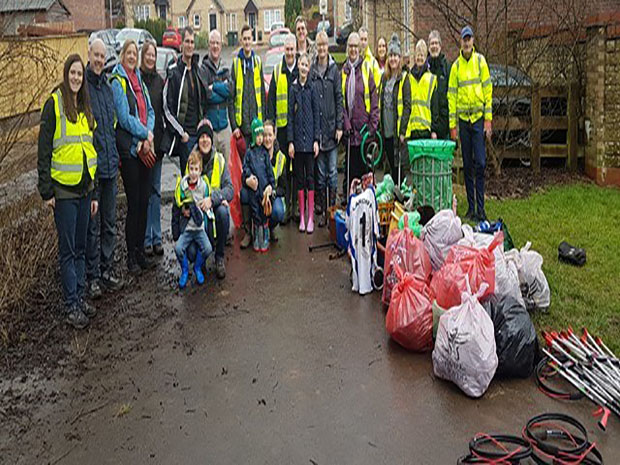 PONTPRENNAU residents collected 46 bags of rubbish on their second litter pick of the year.

More than 30 residents took part in the event on Saturday.

Martin Gilbert, 49, from Cork Drive, Pontprennau said: “We have some lovely areas to walk in Pontprennau with a network of paths and woodland.

“To see so much litter frustrates me and I enjoy doing something about it. Pontprennau is a great place to live and we should look after it.

“As an area, we feel very strongly at how the minority can ruin things, but it’s great to see residents who care and want to look after the area they live in.” Some of the rubbish collected in Pontprennau at the weekend

The Keep Pontprennau Tidy group wants to set up a constitution which will allow them to fundraise for equipment and have more control over their litter picks.

“I get so angry and disappointed when I see the rubbish in the streets,” said Alison Ellaway, 47, from Maes Y Wenol, Pontprennau.

“We use the parks in the summer and to see the amount of rubbish left behind is really frustrating.

“It’s very rewarding to clear up a patch of ground and it is addictive!”

The event is backed by the council’s Love where you Live campaign which encourages residents to maintain the environment.

“I am delighted to see that people have shown great interest in our community. Pontprennau is a lovely place but it’s being ruined with the amount of litter on the streets.

“It’s not fair that residents have to clean up after people and there is only so much they can do.

“We want people in cars to stop throwing rubbish out and dog walkers to clean up their mess. Our residents do a wonderful job and we will continue to support them.”

“They are a really good way for people to take action against local problems, particularly around litter and fly tipping,” she said.

“Litter picks are great for social activity and a good way for local people to get involved with the community.

“The hope is that once people realise volunteers are taking to the streets, we will see a behaviour change.”