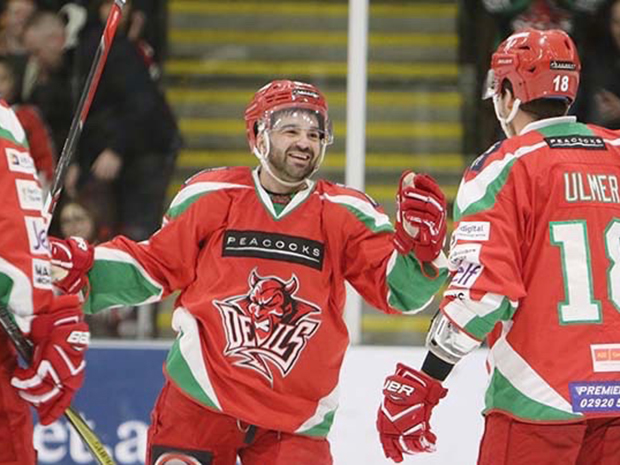 AFTER losing 3-1 in Manchester on Saturday night, the Cardiff Devils bounced back with a 6-2 win over Belfast Giants in front of a sold out Ice Arena Wales crowd on Sunday.

There was an extra element to Sunday’s game, as the two sides prepare to face each other in the Challenge Cup final this weekend.

The Devils got off to a perfect start, scoring the opening goal after an extended period of pressure, as Andrew Hotham found Sean Bentivoglio at the side of the net who made it 1-0 after 28 seconds.

The away side came right back with Jeff Mason bringing the puck into the Devils half and finding Matt Towe who put the puck past Ben Bowns to tie the game at 1-1 at 2:10.

The period ended with two penalties called against the Giants. First Colin Shields was called for holding with 13 seconds left on the clock, then Ryan Martinelli for cross-checking with 3 seconds left to play.

These two penalties meant the Devils would start the 2nd period with nearly 2 minutes of a two-man advantage.

However, the Devils couldn’t convert on the 5 on 3 powerplay, but they did score just as the Giants players came back on the ice.

Layne Ulmer’s shot was saved by Whistle, but the rebound went straight to Justin Faryna who buried it to make it 2-1 for the Devils at 22:05.

Less than 2 minutes later, Bentivoglio had his second goal of the night, with Asselin getting his second assist of the night as well at 23:56 to put the Devils up 3-1.

Patrick Asselin made it 4-1 when Andrew Hotham found him all alone in front of the net and he tucked the puck into the net at 32:00.

The Giants pulled one back, a shot from Spiro Goulakos was tipped in by Colin Shields at 35:56 to make it 4-2 after 40 minutes of play.

Joey Haddad scored to put the Devils up 5-2 at 50:52 then with the clock running down Matt Pope scored into the empty net to complete the scoring at 6-2.

This win gave the Devils a vital 2 points in both the league and conference standings going into a very important week of hockey with a home game on Friday against the Manchester Storm then the Challenge Cup Final on Sunday against the Giants.