Children sad after vandals use drugs at playgroup 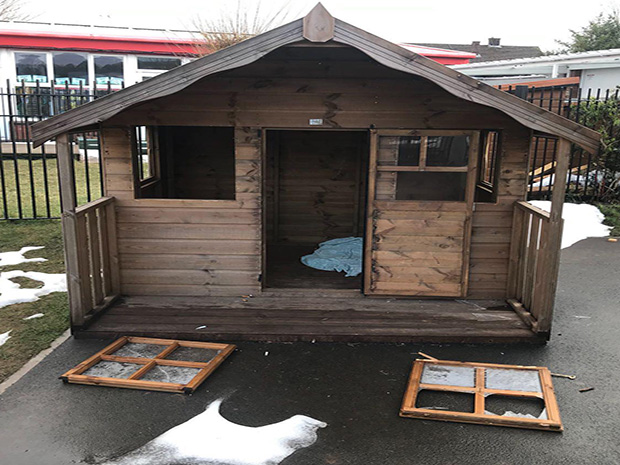 Windows smashed and frames pulled out

STAFF and children at a Llanrumney playgroup are upset after vandals broke in and damaged their playhouse while taking drugs.

Windows were smashed and the frames pulled out at the Little People Playgroup, on Shaw Close.

“We were so upset when we saw it, staff work hard to make sure the children in our care are safe,” said Carolyn Harris, manager of the playgroup.

Community members have come together to help fix the playhouse.

Mrs Harris added: “The children love playing in the house and they can’t enjoy it until it’s fixed.

“Parents and people in the community have been fantastic by offering to fix items and restore it to its original state.

“They are also outraged that people would do something like this to children’s equipment in a playgroup.”

Children attending the playgroup are two and three years old and have been left asking staff members who broke their equipment. Drug use found at the playgroup

Sian Hampton, staff member said: “I am so annoyed that people can behave this way.

“It is so upsetting to see the children unable to get use out of equipment that they get so much enjoyment out of.”

Deirdre Crimmins, owner of the playgroup said: “It saddens me that while we have worked hard to build the playgroup and give children wonderful opportunities, people have decided to try and destroy that.

“The whole team are devastated for the children but would like to take this time to thank the community for their support.”

“Access was gained to the property and damage caused to the windows and there were signs of illegal drug use.

Drug use, Llanrumney, Playgroup, rumney, Thieves, Vandalised
You may also like