Home > Where You Live > City > Don’t do VR, do what fits your story, say Cardiff creatives

Don’t do VR, do what fits your story, say Cardiff creatives 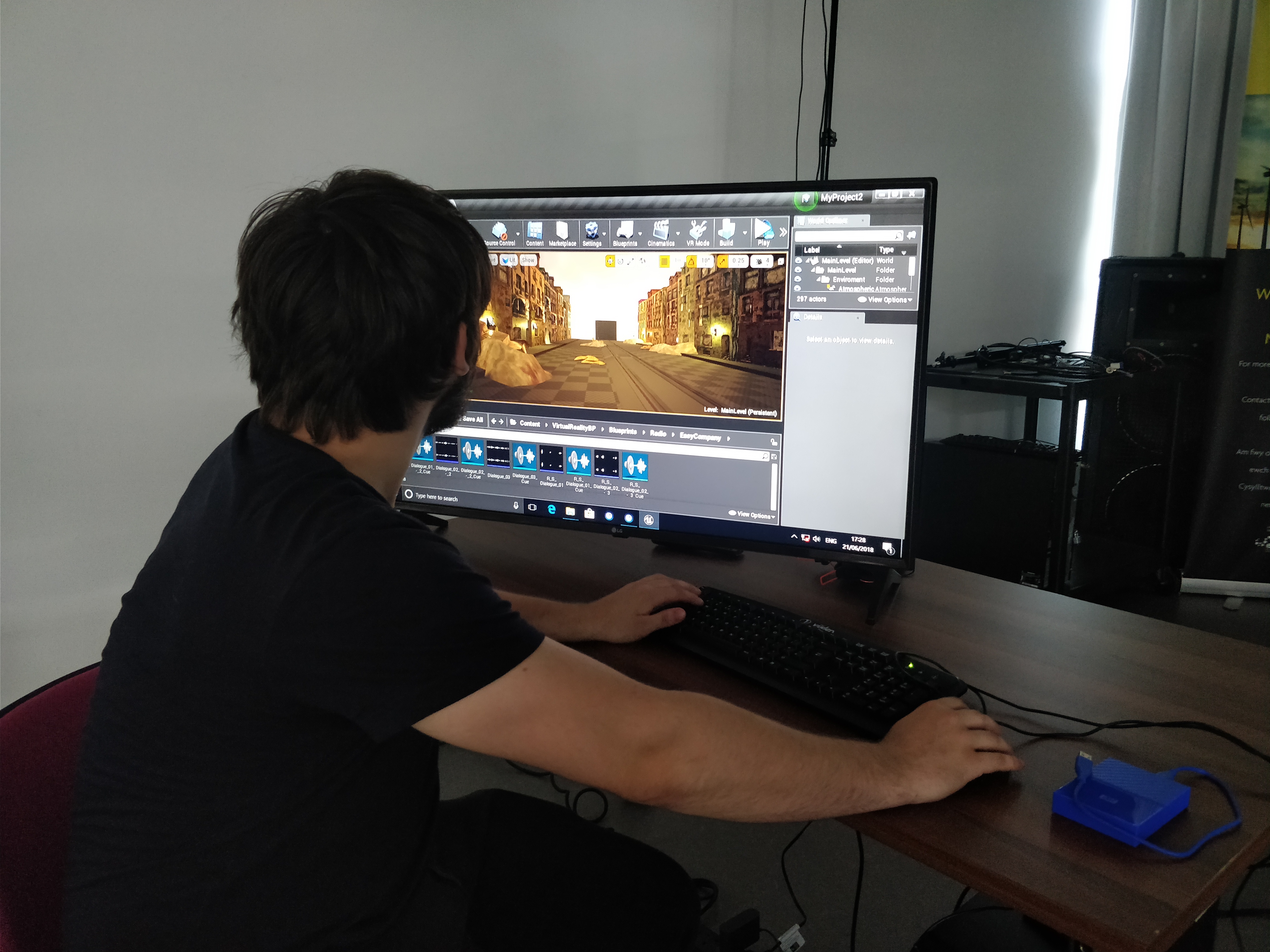 Kayleigh McLeod, who facilitated the event, introduced speakers from Orchard Media, Talespinners and the University of South Wales, where the quarterly event was held.

USW senior lecturer in music and sound, Stuart Jones, explained why immersive audio is more accessible today despite being around for 40 to 50 years – it’s cheaper and the tech is more portable.

But the same cannot be said for VR. Students at the University of South Wales demonstrate their own VR games.

Keynote speaker Ian Thomas, director of Talespinners, a company that helps game producers develop their narrative, believes VR is “not dead, because it has never been alive”.

He said: “Virtual reality has not boomed because the price still needs to drop a lot. There are also a lot if people using VR because they feel they have to – not because they should. You should use whatever story telling method suits your story.

Glenn Hapgood, business development manager at Orchard Media, said too many people are focusing on graphics and not the story.

He said: “The brain will believe the world if the narrative is good enough.

“Stop focussing on the look – it’s easier for us to sympathise with a cartoon than, say, a man with a beard, if you don’t have a beard!”

The cluster agreed that virtual reality was not about creating fidelity, but evoking emotion.

Audience members want to explore VR in healthcare, theatrical storytelling and journalism and were encouraged to network, pool together skills and collaborate.

The next VRSW meetup will be in September.

See live tweets from the event below:

#VRSW Audio breakout group feed back on their discussion and how #5G technology is going to greatly develop spatial audio.

And that’s all for the second quarterly @CreativeCardiff VR meet up.

See you in September! ? pic.twitter.com/z8NbVGxCUt

“It will be interesting to see what people who start and think in VR come up with.”

Students at @UniSouthWales demonstrate their #VR games to #VRSW creatives while parts of the cluster talk empathy.

The group believes it’s all about putting yourself into someone else’s shoes. VR is an experience, not a story. @CreativeCardiff pic.twitter.com/HFb70cOQqq

To sum up Ian Thomas’ keynote:
Design is storytelling, don’t have passive players, remove the friction and use #VR strengths.

Storytelling is about laying out breadcrumb trials showing those carefully designed points of interest. You are not presenting a story but stepping into a world. #VR #VRSW @CreativeCardiff https://t.co/LkxSYoUO9c pic.twitter.com/IMoXdgJzeB

Eliminating friction is important because as soon as you stop and think about what you’re doing, it’s no longer real. VR is about blurring the lines between the player and character – Ian Thomas, #VRSW @CreativeCardiff

.@tale_spinners Ian Thomas explains what ‘story for games’ is and what projects Talespinners have worked on so far.

Kicking off #VRSW is Stuart Jones explaining why digital storytelling and immersive audio is more accessible today, despite being around for 40/50 years. @CreativeCardiff @UniSouthWales @WFoInnovation pic.twitter.com/kCQSfDZl2l

What’s #VRSW2 all about? Check out my article on the #innovative first quarterly meetup where creatives came together to speak about #spatialaudio and #digitalstorytelling. @CreativeCardiffhttps://t.co/jNJtbVLND6

I caught up with Ian Thomas, Director of @tale_spinners and #VRSW2 keynote on why #CreativeClusters in #Cardiff are so important. Check out what he had to say. @CreativeCardiff pic.twitter.com/xDE1l9B78a

Curtians are pulled shut on the fourth floor of the University of South Wales, blocking Cardiff’s summer sun beaming through as techies set up #VR for #VRSW @CreativeCardiff @WFoInnovation pic.twitter.com/iIG5eg3vA3