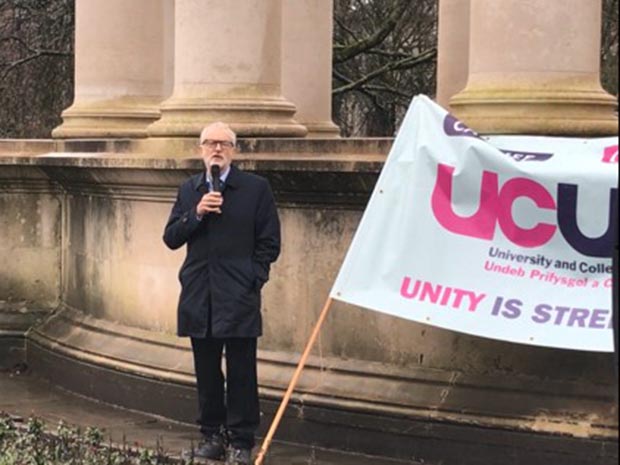 Over 200 staff and students marched from the Main Building, Park Place, to Alexandra Gardens, where Mr Corbyn pledged solidarity with those on strike: “I’m proud to stand here on the picket line in support of teachers in struggle. I think that is the place my party should be.

“We used to look upon university lecturers as people who had a good status, a good salary, a pensionable position, and above all had permanent contracts.

“What we’ve seen over the years is university and college lecturers being very badly treated and an attack on their wages, and working conditions, damaging our whole higher and further education sector,” he said.

Dr Andy Williams, media spokesperson for Cardiff University and College Union, said that Mr Corbyn’s attendance, confirmed via email the night before, was a “lucky” last-minute development: “Hearing him speak gave us all a much-needed boost, as staff are incredibly demoralised.

“The pickets look just like they did in 2018, which is a testament to the continuing strength of feeling amongst staff about the issues that we’re striking on.

“I’m sure the momentum from today will continue,” he said.

Dr Catherine Walsh, department representative for UCU, attended the rally and said: “I heard on Twitter that he was coming and thought it was terrific.

“The Labour party has always been supportive of collective action and Jeremy Corbyn himself has a history of that over his career.

“It’s also great because I know that he’s very popular with students, so it’s fantastic that they came to see him give a supportive message.

“It was really helpful for our momentum over the next two weeks,” she said.

UCU rejected the deal proposed following the November strikes, causing another 14-day strike at 75 universities across the UK.

“This is the last chance saloon to save higher education in the UK for a lot of us,” said Dr Williams.

“We’re dumbfounded that the vice-chancellors and senior managers in the universities still are sticking their fingers in their ears and ignoring the concerns of staff.”

Cardiff UCU chairman Dr Chris Graves criticised the decision to upgrade the student’s union: “Senior management are spending over £50 million on a new building, but the money is coming from current accounts, from their back pockets.

A letter to impacted staff from UUK and Universities and Colleges Employers Association (UCEA) said: “We respect the rights of union members to take industrial action, and we understand that as long as the perception remains that their concerns are not met, individuals may well feel that their only course is to go on strike.

“However, it is disappointing that the real progress of discussions, the commitments made on both sides, and the positive trajectories offered in both disputes are not being acknowledged.

“Universities will do all they can to minimise the impact of any further strike action on students, their other staff and the wider community and we know that colleagues contemplating strike action will want this too.”