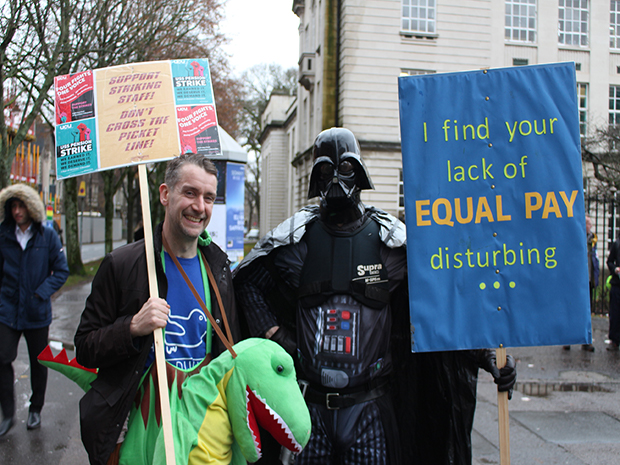 UNIVERSITY staff in Cardiff will strike for a second time in one year for 14 days over pay, pensions and workload – after talks between unions and employers broke down.

The walk-out will include lecturers, pastoral workers, IT staff and PhD students who teach as part of their course.

Cardiff staff will join colleagues at 75 universities across the UK who are joining the University College Union (UCU) walkouts starting on 20 February.

Rachel May Phillips, a 27-year-old PhD student at Cardiff University, said she is striking again as a last resort so talks can resume.

“I’m worried I won’t be able to sustain my job, as I want to start a family soon,” she said.

“I am striking both for my future and the current state of the industry. I don’t think it’s radical to not want a 25% gender pay gap, or to want fair pensions.

“It’s not radical to think there’s something not quite right about the Vice-Chancellor earning £350,000 a year, while the lowest paid lecturer member is paid less than £21,000 before tax.”

The dispute between Universities UK, which represents the employers, and UCU began with proposed changes to university staff pensions, which sparked a 14-day strike in 2018.

Dr Andy Williams, media spokesperson for Cardiff UCU, previously said the pension changes would cut post-retirement income in half for some staff.

Negotiations between UUK and UCU began after the 2018 strike but broke down last year after UUK’s deals were rejected.

In November, Cardiff staff were among employees from 59 other universities to strike for eight days over pensions, but also added the issues of casualisation, pay inequality, and workload.

This next wave of strikes is being fought over all the previous issues together, escalating from two days this week up to a full five-day walk-out between 9-13 March.

“It took a strike to get them around the negotiating table last time”, Ms Phillips said.

“The issues weren’t resolved but at least we got talks.”

Staff will be losing out on pay for any days missed, but Ms Phillips said she is lucky as her PhD is funded by a research council.

“For people in households where both people are academics, which isn’t uncommon, they are completely devoid of nearly a month’s income after both strikes,” she added.

Dr Andy Williams said: “We’re here again because even though the first strike was successful in forcing the employers to negotiate with us, what they’ve come back with is utterly inadequate.

“The pay increase they came back to us with was 1.5%, and a study from UUK is now showing eight out of 10 Vice-Chancellors won’t compromise over pensions.

“It’s laughable, and we were asking for a fairly modest amount of around a 5% increase.

“I’m astonished the employers have let it go this far, that they are not talking to their staff over these issues which are driving them to their wits end.”

Some students, including James Wallice, 20, have expressed concerns about the effects the strikes may have on them.

Mr Wallice, an international relations and politics student at Cardiff University, said: “Whilst I completely sympathise with the reasons behind the action, we must remember that it’s students that are facing the harsh reality of strikes.

“Lecturer-student time has been drastically cut, lectures are being missed and students are out of pocket.

“The other day we received reports that final year students might miss their graduation because so much of their final year has been missed due to strike action.”

Mr Wallice was referring to a leaked email sent by Cardiff Students’ Union President Jackie Yip, in which Ms Yip said some of her students may not graduate due to missed teaching.

However, Ms Yip told student newspaper Ghair Rhydd: “There’s no clear definitive answer on what these impacts will be, that’s why we haven’t spoken publicly about this yet.”

Mr Wallice added: “This simply isn’t good enough. It’s absolutely vital all parties, including the Students’ Union, come to the table and thrash out an amicable agreement as soon as possible.”

Ms Phillips said she understands the worries, having been a masters’ student affected by the 2018 UCU strikes.

“I feel like a lot of students support the reasons for it but are frustrated by the strike itself, that they aren’t getting what they paid for,” she said.

“If we’re going to talk about university as a product, which I don’t like doing, what they’re getting is sub-standard because staff members are stressed, sick, overworked, and underpaid.”

Antonia Elizabeth, a 21-year-old masters student at Cardiff University, said she supports the strikes despite the disruptions.

“Lecturers and professional services staff work do around two days a week of unpaid work, which is out of contract,” she said.

“I truly don’t think an institution that values its staff so little can provide the world class education you’re promised.”

A Cardiff University spokesperson said: “Whilst we fully respect the right of staff to take part in legal industrial action our priority is providing education for our students.

“The University cannot resolve these issues on its own. We will remain open throughout the days of strike action and will do everything possible to minimise disruption.”