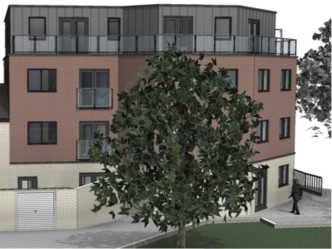 A BLOCK of flats has been given planning permission despite opposition from residents and politicians.

An application to build 11 flats at the Wern Goch Shop site in Pentwyn was approved by the Cardiff Council last week despite the application being met with opposition from residents, all four ward councillors, the Cardiff Central AM Jenny Rathbone and Labour MP Jo Stevens.

The Cardiff Central MP said: “The neighbouring properties are small two-storey houses and residents are concerned about a block of flats overlooking their homes and the over-development of the existing site, along with the increased pressure on parking provision and extra noise from a large number of new residents.

“It’s vital that we build new housing in our city to accommodate the increasing population, but development needs to take account of the existing environment.”

Joe Carter, Liberal Democrat councillor for Pentwyn, agreed. He said: “This is a huge disappointment for residents living in Wern Goch.

“Everyone knows we need more housing and people wouldn’t have opposed building a two-storey structure for houses or flats to match the rest of the estate. Instead the developer has pushed ahead with this huge four-storey building that is massively out of place.” A petition objecting to the site had 131 signatures, saying it was an overdevelopment and would have a negative impact on the quality of life of residents.

However a petition of 77 signatures was also submitted in support of the development.

Jay Patel, 37, the site developer, said he was pleased to be given permission and that the amount of opposition has not put him off as he feels he has done everything to make sure the building complies with regulation.

Most objections to the build are centered around the fact it will reduce parking, light, access for residents and will be out of keeping with houses in the area.

Yet Mr Patel said that he did a shadow survey which showed that light would not be blocked off anymore than by trees and he did an independent parking survey which highlighted there was already parking in the area.

Mr Patel also explained how he was providing the maximum number of car parking spaces required by the planning officer, which is six spaces.

Other objectors have said that Mr Patel wouldn’t be willing to have Housing Association renters.

“People were saying we wouldn’t let Housing Association in when ultimately I want to work with the councillors on this, he replied.

“Not many developers want to go in that area, they forget about it. We have got a couple of houses in that area and we gave it to the Housing Association and to be honest they are some of the best tenants I have ever had.”

Mr Patel grew up in Pentwyn and Llandeyrn and now lives in Llandaff. He said his whole family have worked very hard to make something of themselves after his father came from India in 1987.

“Now I have a daughter and that’s my motivation – the other block is named after my daughter – it does mean something to me. We have been very fair, and when I read some of the comments online they were hurtful”.

Patrick Mcculloch, 27 who lives on Wern Goch West is one of the residents who supports the scheme.

He said: “I think the development is getting a lot of negative comments online mainly from people who seem jealous of the venture. I think it’s great that there will be more homes for people in the area.

“The owner of the shop I know has helped people in the area and housed them. I think people just love a moan in this area and certainly don’t like to see others doing better.”

Elizabeth Shahab, 25, who lives on Clarendon Road said: “I think its brilliant to see more flats being built in the area. There is simply not enough affordable housing in Cardiff.

“It’s easy for people to complain about parking and privacy in their gardens from their warm homes, unfortunately the masses of homeless in this city don’t have that luxury.”

Mr Patel does not yet know when the building work will start but added he wants to use local building contractors if possible.