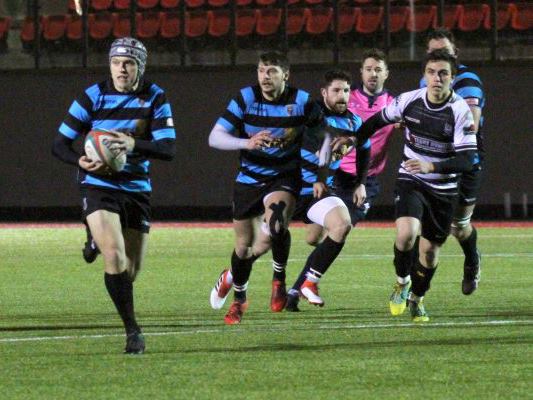 The Blue and Blacks must win on Friday to keep the pressure on leaders Merthyr. (Viv Jones Photogrpahy)

BEDWAS RFC travel to Cardiff on Friday in a bid to upset the Blue and Blacks’ title credentials.

The man behind Cardiff RFC’s title challenge, Steve Law, tackles a team he will remember fondly and who are in desperate need for points themselves — Bedwas.

Law spent 16 years at the club leading them to a Fosters Cup triumph and the semi-finals of the Premiership play-offs.

Times have been bleaker this season for Bedwas as they sit just one point outside the reinstated relegation zone.

Relegation was “ring-fenced” for two seasons as the Principality Premiership restructured itself, but up to five teams can now be relegated as it returns to a 12-team format next season.

The team who finishes 12th (a position Bedwas currently occupies) will face a playoff match with the winner of the Championship to determine who will be the 12th team next season.

A resounding victory last time out against fellow strugglers Bargoed RFC, Stefan Sankala’s men have 10 games to turn it around.

Failure to win could also mean that Llanelli RFC can leapfrog them with a win against Bargoed who have lost their last 12 league games.

However, things have been much brighter for Cardiff this season.

Law’s men are the league’s in-form team and unbeaten in their last nine they have an opportunity to go level on points with high-flyers Merthyr.

The Leicester City of rugby, Merthyr’s story is nothing short of remarkable. After promotion in the 2015/16 season, they lifted the Principality Premiership in the two seasons that followed.

The Ironmen now find themselves in prime position to be the first side to win three consecutive Premiership titles, but 2009 champions Cardiff will have something to say about that.

After their slow start at Ystrad Mynach last Friday, Law will be keen to see more focus from his men after conceding potentially the fastest try of all time at 7.2 seconds.

Cardiff found themselves 11-7 down at half time before an inspired performance from Steff Jones kept their unbeaten run intact.

Will Davies-King from the academy may once again be added to Law’s squad as the Blue and Blacks have a few absentees.

Cardiff Arms Park, Cardiff RFC, rugby
You may also like