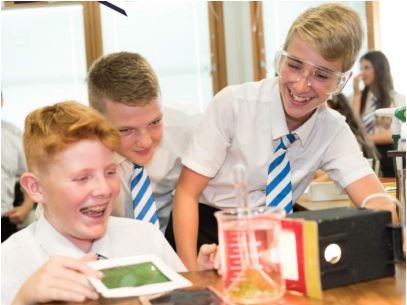 A CARDIFF school that overturned its Red status to Green credits a change in school uniform as one of the reasons for the improvement.

Llanishen High School was categorised as Green by the Welsh Government in the latest round of National School Categorisation, just four years after being placed in the support category red.

The categorisation looks at things including school management, quality of learning, assessments, attendance and exam results. Schools are placed in one of four support coloured categories – green, yellow, amber and red – with green requiring the least support and red requiring the most.

Headteacher, Sarah Parry, who was appointed in 2015, claims that she does not know of another secondary school that has made such rapid progress.

The first thing she did to address the poor standards in the school was change the uniform.

“By setting those rules and sticking to them, we were saying to the students ‘these are our rules, you come to our school, you take pride in your identity and who you are, and you know that we mean what we say,” she said.

The introduction of ties and blazers, received a lot of criticism at first, people argued the school were wasting their time on something trivial. Mrs Parry says this has really benefited the children’s attitude towards their education, who often say to her “we feel like we go to one of those posh schools”.

“Now that they wear the blazer, the children stand a bit taller,” said Mrs Parry.

Encouraging the students to take more pride in their education made it easier for teachers to set higher behaviour standards throughout the school.

Mrs Parry said the school now produces some of the best results in the city.

The school also focussed on improving teaching standards which was a difficult task due to the fast turnover of staff at the time.

The school went from red to amber in 2015, then amber to yellow in 2016 where it remained for two years, Mrs Parry said the decision was made not to push the improvement too fast in a bid to ensure the success would be sustainable each year.

Llanishen hosts specialist county resources, which includes a centre for children with hearing impairments, and another for children on the autistic spectrum.

This allows children to attend mainstream schooling whilst receiving extra support for their disability.

“We are really proud of the provisions that we have to accommodate children with such different needs,” said Mrs Parry. The school has expanded over the years to accommodate the growing number of pupils in attendance, including a new arts and science block and a 4G sports pitch.

The £1.6m pitch was provided by Llanishen Rugby Team who share the world class facilities.

The new facilities improve the quality of learning, one of the factors that is assessed by the government when considering a school’s support status.

To find out where other schools placed, click here.