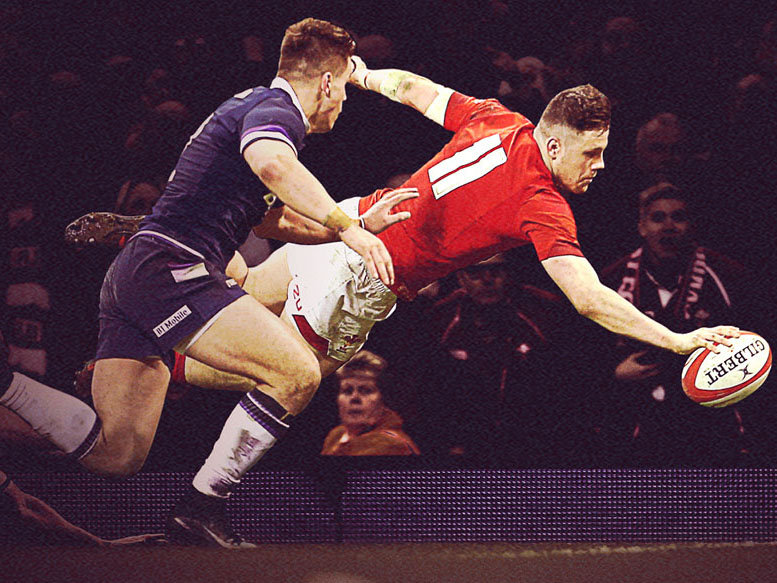 WALES centre Jonathan Davies has warned that the Scots are not to be underestimated ahead of tomorrow’s Six Nations  test in Murrayfield.

As the only unbeaten team in the the tournament, Wales will hope to end a chaotic week for domestic rugby with another win.

Despite the chaos that has erupted among the Welsh regions this week, Head Coach Warren Gatland has urged his team to keep their eye on Six Nations glory.

Spurred on from their win over England, Wales could have done without a week off to stall their momentum.

Nevertheless, with just one change after their victory over their old enemy, the Welsh pack will hope to keep the winning run going in Edinburgh on Saturday.

Cory Hill will miss the rest of the Six Nations after sustaining an ankle injury against England, with Adam Beard being drafted in as his replacement.

While full back Leigh Halfpenny has been making his comeback from concussion with the Scarlets, Gatland has kept Owen Watkins as the replacement for outside back.

Centre Jonathan Davies has said that Scotland will be looking to bounce back after their defeat to France.

“They’ll be hurting from what happened out in France so they’ll be looking to start well and get the crowd behind them and make sure they put us under pressure,” said the Scarlets player.

“Two years ago we were well beaten there, so we can’t take them lightly. We’ve got to show them respect because it’s going to be a very tough Test match.

A win on Saturday is essential for Wales ahead of their clash with Ireland in what looks to be the deciding fixture of the tournament. Still reeling after their 27-10 defeat to France, fifth place Scotland have made a number of changes ahead of the game.

Injuries have dogged the Scots throughout the tournament. Key player Stuart Hogg is still receiving treatment for a shoulder injury, while George Horne, D’arcy Rae, George Turner and Chris Dean have all also been ruled out.

Scotland will be relieved to see the return of Finn Russell after missing the clash with France through concussion.

Hamish Watson, WP Nel, Sam Skinner and Grant Stewart have also made their way back into the squad.

Wales are physically the stronger side and so the Scots will probably avoid getting into a physical battle. They will be looking to play unstructured rugby and exploit gaps in the Welsh back line.

What the coaches said:

Wales Head Coach Warren Gatland said: “The biggest challenge for us is not to be happy with beating England.

“We must not accept where we are at the moment but try to build on Saturday and create something very special. I haven’t lost in Scotland, but they’ve become really tough to beat there.

“We are a team that is maturing. They can go through phases in a game where we are under pressure but that doesn’t seem to rock them. I don’t see fear in their eyes or any trepidation.” Meanwhile, Scottish head coach Gregor Townsend has called on his side to find their form.

“The last game and a half we’ve not played close to our potential.

“Going into half-time against Ireland we were playing well, getting into the game with our attack, putting Ireland under pressure,” he said.

“Since then we’ve shown too many inaccuracies in our game. That’s what we’re working on to improve this weekend. We’ve got a job to do which is to play much better but also deliver a performance our supporters can be proud of.”

grandslam, six nations, wales, WRU
You may also like