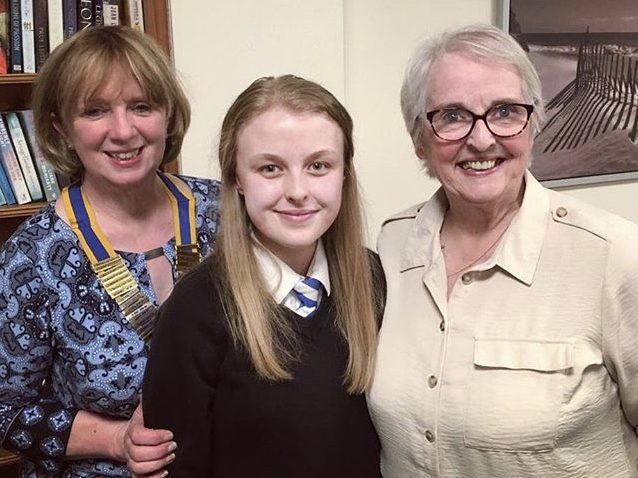 Molly Fenton with her award for a speech she gave on ending period stigma.

A SCHOOL girl activist is calling on the Welsh Government to provide sufficient funds for schools to give out free sanitary products.

Cardiff pupil Molly Fenton, 16, has set up a petition to raise awareness of her #loveyourperiod campaign, which hopes to erase the stigma surrounding periods.

“No girl should ever suffer because of the extortionate prices women are forced to pay for the natural bodily function of a period” said Molly.

A month ago, Molly, from Thornhill, competed in a debating competition where she gave a speech on period poverty and the associated stigma, and she said she “terrified” the older male judges in doing so.

She has since performed the speech for Llanishen Rotary Club and will be speaking at her school’s senior team meeting this Thursday as they discuss the rollout of Cardiff Council’s period dignity scheme.

“I hope to aid other schools over Cardiff, as well as Llanishen High, in doing the best for their students. It shouldn’t be a choice between menstruation and education, it is a right that we have both,” said Molly. Molly Fenton attended a meeting with Llanishen Rotary Club where she presented a 20 minute speech on period poverty.

Molly has also been given sanitary products that she can take to school for pupils to access easily and “drama-free.”

Molly’s hopes could soon become a reality. Cardiff Council yesterday announced the roll out of a period dignity scheme as part of the Welsh Government’s £1m funding to address period poverty in communities across Wales.

The Welsh Government announced in March last year that local authorities across Wales will receive £440,000 over the next two years to use in schools, community groups or foodbanks, all with the aim of tackling period poverty.

Cardiff Council are going to supply primary and secondary schools with the products and equipment to implement the scheme which will see dispensers installed in cubicles – as privacy was a key issue highlighted by pupils who were consulted in a period dignity survey last year.

Schools will also be provided with a period dignity sticker which will be used to identify cubicles in school toilets where pupils can access the free products.

Schools have been given great responsibility and flexibility to run the scheme with an emphasis on pupil involvement on decisions regarding locating supplies and checking supplies. Cabinet Member for Education, Employment and Skills, Councillor Sarah Merry said: “Period poverty is a very important issue that has been highlighted recently but it is important we chose to make it part of a wider conversation about period dignity.

“We want pupils to know that periods are simply a natural part of growing up and to make sure that pupils can access the products they need.”

Molly will be involved in her school’s planning of the period dignity scheme this Thursday and is hopeful the funding will be extended past the initial two-year scheme.

“There’s not a lot I can do myself, but altogether we can combat this together, but only when we get over the unnecessary embarrassment society has created surrounding periods.”