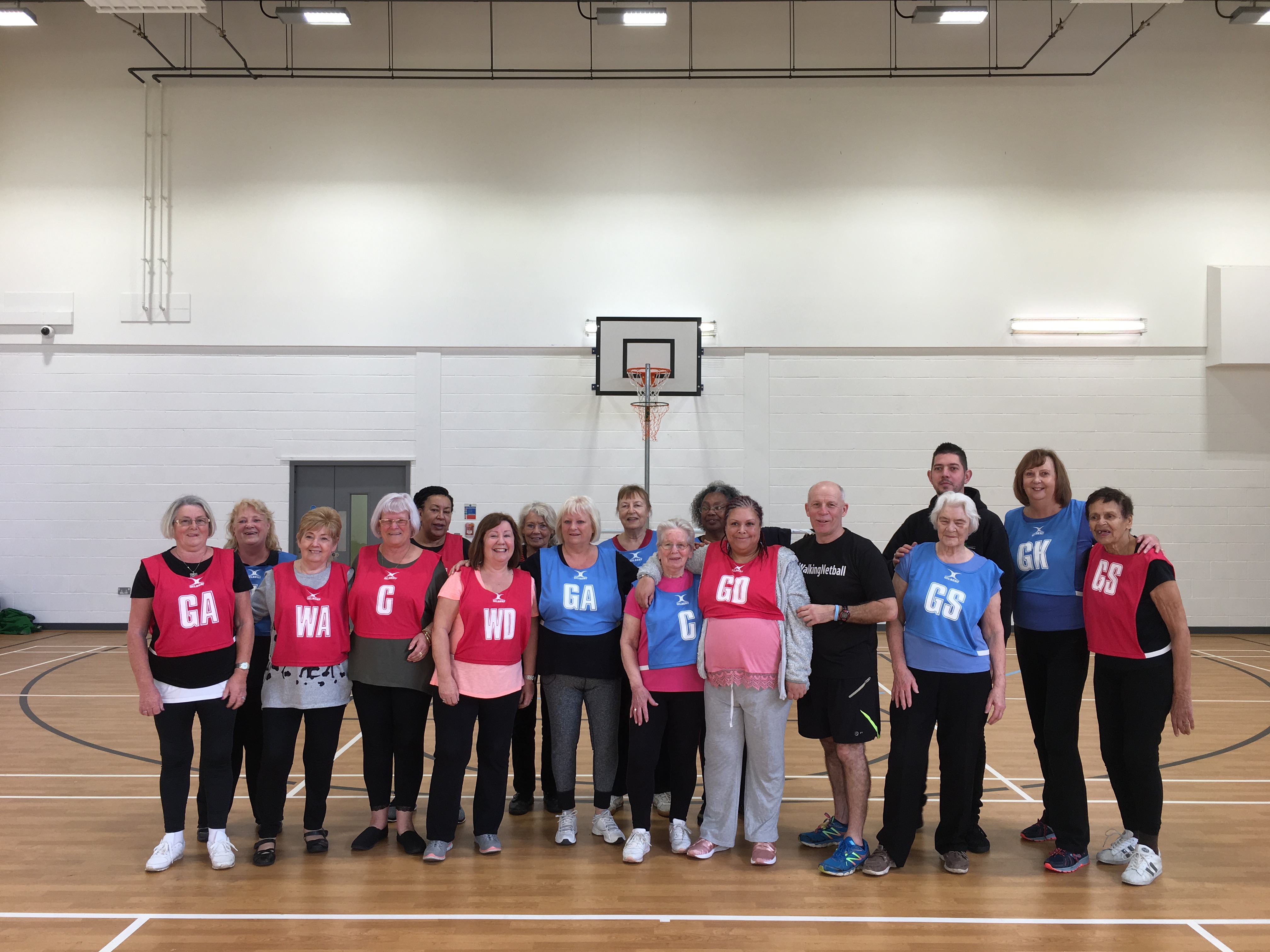 PAM wakes up at 6am every day and exercises for half-an-hour. On Wednesday’s she runs a ‘KeepFit’ class at the St. Mellons Hub. Immediately after, she plays netball.

This is not the diary of an uber-organised and youthful suburban woman.

More remarkably, she has battled through a brain tumour and currently suffers from blood cancer.

“You feel better after doing it,” she says, humbly.

Strangely, this is not an isolated tale of inspiration within her ‘Waking Netball’ team, run by East Sport Cardiff.

“The impact and the stories we hear all the time are just heart-wrenching,” said organiser Lorraine Rye, 52, who is also Neighbourhood Sports Co-ordinator for East Cardiff.

What is ‘Walking Netball’?

Every Wednesday morning, a group of lively ladies, ranging from 67-to-87-years-old, descend on the local community centre.

The sessions begin with passing drills and ends in a game, where running is penalised.

Some of the women are physically disabled, and one is partially sighted, but that doesn’t stop them from coming.

Last week, it was one member’s birthday and Sarah – who wished to remain anonymous – was serenaded with ‘Happy Birthday’ both before and after the session.

“The confidence it has given them is huge,” said coach Gary Fish, who runs the sessions.

“The amount of fitness exercise they are doing is almost unquantifiable.

“They’re working a lot on their core mobility and it gives them confidence.”

Walking football and rugby has been popularised throughout Wales, too. Gary and Lorraine both agree that the sessions are about more than exercise, believing gateways to meaningful friendships are vital in combatting loneliness.

Age UK found that loneliness and social isolation has the same health implications as smoking 15 cigarettes a day, increasing the likelihood of mortality by 26%.

Each session ends with a cup of tea and a slice of cake at the Innovate Café.

“I like doing these things because it gets me out of the house and stops me feeling lonely,” said Pam, from St Mellons.

Gary, 59, from Newport, said the social side of sitting in the café is crucial.

“They have self-managed and developed their own community and it is lovely to see – it is heart-warming,” he said.

“We tend to forget that a lot of them are potentially on their own – so this bond is invaluable.

“Probably the biggest thing is the infectious laughter and fun they have.

“It’s just seeing the joy on their faces. I get quite emotional as I’m saying it, because they become friends.

“If this session ever stopped, not only would myself and Lorraine be upset, I don’t think the effect on the other people would be quantifiable.”

Another group member, Rosemary, aged 74, said she joined when she retired.

“When I finished work, I didn’t want to sit at home and do nothing,” she said.

“It’s also about the company of other people – we are all friends now.”

The importance of such schemes are clear, with two-fifths of old people stating in an Age UK Survey that television is their main company.

“We know sport can be a tool to help – if that can change one person’s life, then it is worth every penny,” said Lorraine.

If a member misses a session, Lorraine will ring them to make sure they’re okay.

“It’s about caring,” she says.

“We are also teaching them to become a silver work-force of badminton instructors to be sent to coach in Primary Schools.”

Lorraine stresses that these sessions are a collective effort. The Innovate Café accommodates the social side of the scheme and Lorraine and Gary work in partnership with the council, with the sessions funded by SportWales.

“We all need to work together to pull this off, no one person can do this,” said Lorraine.