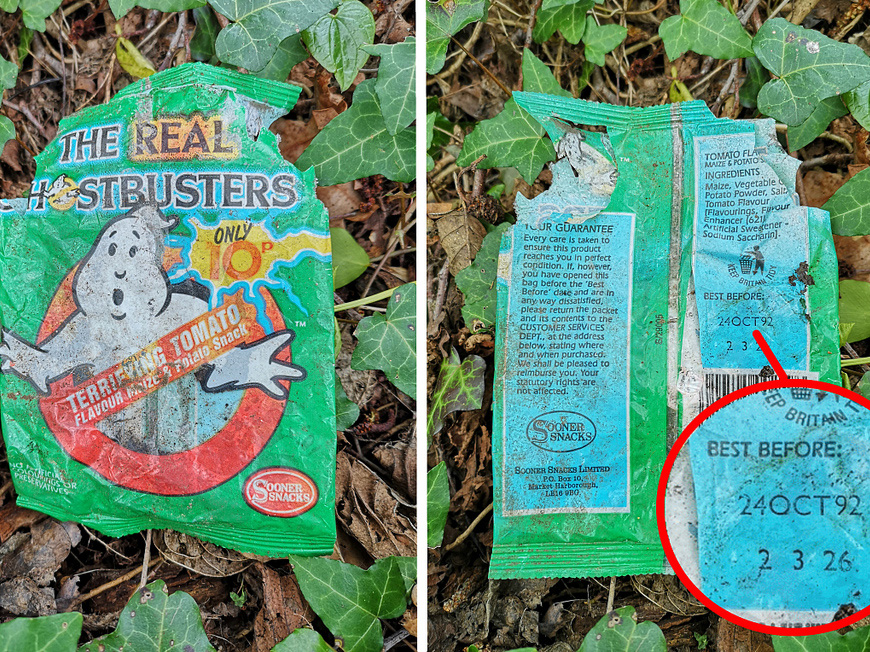 A 27-year-old crisp packet has been found by litter pickers, offering a frightening illustration of the legacy communities face following decades of plastic pollution.

The packet in question – a ‘Terrifying Tomato’ flavoured bag of The Real Ghostbusters – has a Best Before date of October 24, 1992.

This plastic ghost from the past, made by Sooner Snacks, was found at Cath Cobb woodland in St Melons on Friday by volunteers of the scheme Spring Clean Cymru.

“It looked brand new – we need to get these sort of things out so that the wildlife can flourish,” said Louise Tambini, 45, a volunteer from Cardiff Rivers Group. Crisp packets can take up to 80 years to decompose.

They were not recyclable in any way until last year, when a high-profile petition against crisp giant Walkers led to a solution being popularised.

Campaigners in their thousands posted empty crisp packets back to manufacturer Walkers to protest the fact the firm was doing nothing to deal with the specific recycling issue it creates.

The petition against Walkers, which earned 333,274 signatures, was started by Geraint Ashcroft, 61, from Pontypridd.

Mr Ashcroft said: “I was moving stuff out and was trying to find out what could be recycled and low and behold, I found out that you couldn’t recycle crisps.

“I started the petition and after four or five months it really picked up. We targeted Walker because they’re the biggest.”

Mr Ashcroft said: “It’s not just crisp packets either, we found a pack of Minstrels from the ’70s and you could still read it.

“When you consider how many crisps are eaten every day, it’s not enough. Just 1% of people can be bothered to actually recycle them – there’s nowhere near enough drop off bins.

“We really need to get to get to the word out there more and more. We need packets to have biodegradable packing and we need them to be compostable.” Since Mr Ashcroft’s petition, Walkers now works with recycling firm Terracycle to offer a solution, though Terracycle recycles all brands of crisp packet, not just Walkers.

TerraCycle offers a recycling scheme in Wales where people can drop-off their packets at public locations.

The drop-off points can be found on an interactive map here.

Terracycle said: “Currently 879,440 crisp packets have been recycled in the UK.

“Thirty years ago there was no way to recycle crisp packets. Now this free national programme means people can drop off their packets and all the money goes to non-profit organisations and charities.”

crisps, environment, ghostbusters, recycling, Terracycle, Walkers
You may also like