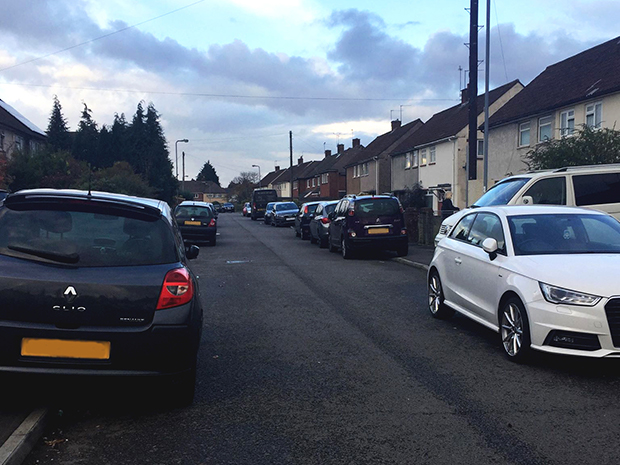 PCSO Esther Lewis and PCSO Marc Fitchett held a meeting at Cardiff Met to discuss the issue with residents.

“Our concern is that the fire service and ambulances would not be able to get down the road,” said Catrin Thomas, of Western Drive.

The residents say they know it is students causing the problem as it only happens during university term time.

“During the summer holidays we get our tranquillity back,” said Llandaff North resident, Georgina Pepper.

“We have seen people with moving vehicles not being able to get down the road and big lorries too,” said Cathy Rodgers of River View.

She said she had trouble getting a removals lorry down the road herself. “I had to go knocking on doors just to see if any of the residents could move their cars,” she said.

“The parking is unacceptable, and it is dangerous,” said PCSO Marc Fitchett. However, he said the police were very limited in what they can do.

“The only real impact we can have is if vehicles are blocking people’s driveways,” he explained.

Llandaff North councillors shared a draft proposal with residents at the meeting outlining a plan to make many roads around Llandaff North permit holders only with a two-hour waiting limit.

These restrictions would apply on weekdays between 8am and 6pm. The proposed cost for permits is £5 for the first vehicle and £20 for an additional/visitor’s permit.

“We are looking to hold further meetings with residents to gather their views on the proposal so we can work together to find a solution,” said Dilwar Ali, councillor for Llandaff North.

South Wales Fire and Rescue Service asks that people be considerate when parking and ensure you are not putting lives at risk.

“Minutes can really mean the difference between life and death when our crews are responding to emergencies. Firefighters and their vehicles often have to be able to navigate through tight residential roads,” said a South Wales Fire and Rescue Service spokesperson.

A spokesperson for Cardiff Metropolitan University said “Students are sent information on sustainable forms of transport to both our campuses including the subsidised Met Rider bus service, and the use of the popular city-wide Next Bike scheme.

“Students are asked to be considerate if traveling by car and adhere to road safety rules including not parking too close to junctions or blocking driveways. Cardiff Met continue to work with South Wales Police and the Local Authority in seeking solutions to this matter.”

council, gabalfa, parking, Western Drive, Whitchurch
You may also like