Home > Long Reads > Glenn Webbe: Why laughter can be best weapon against abuse 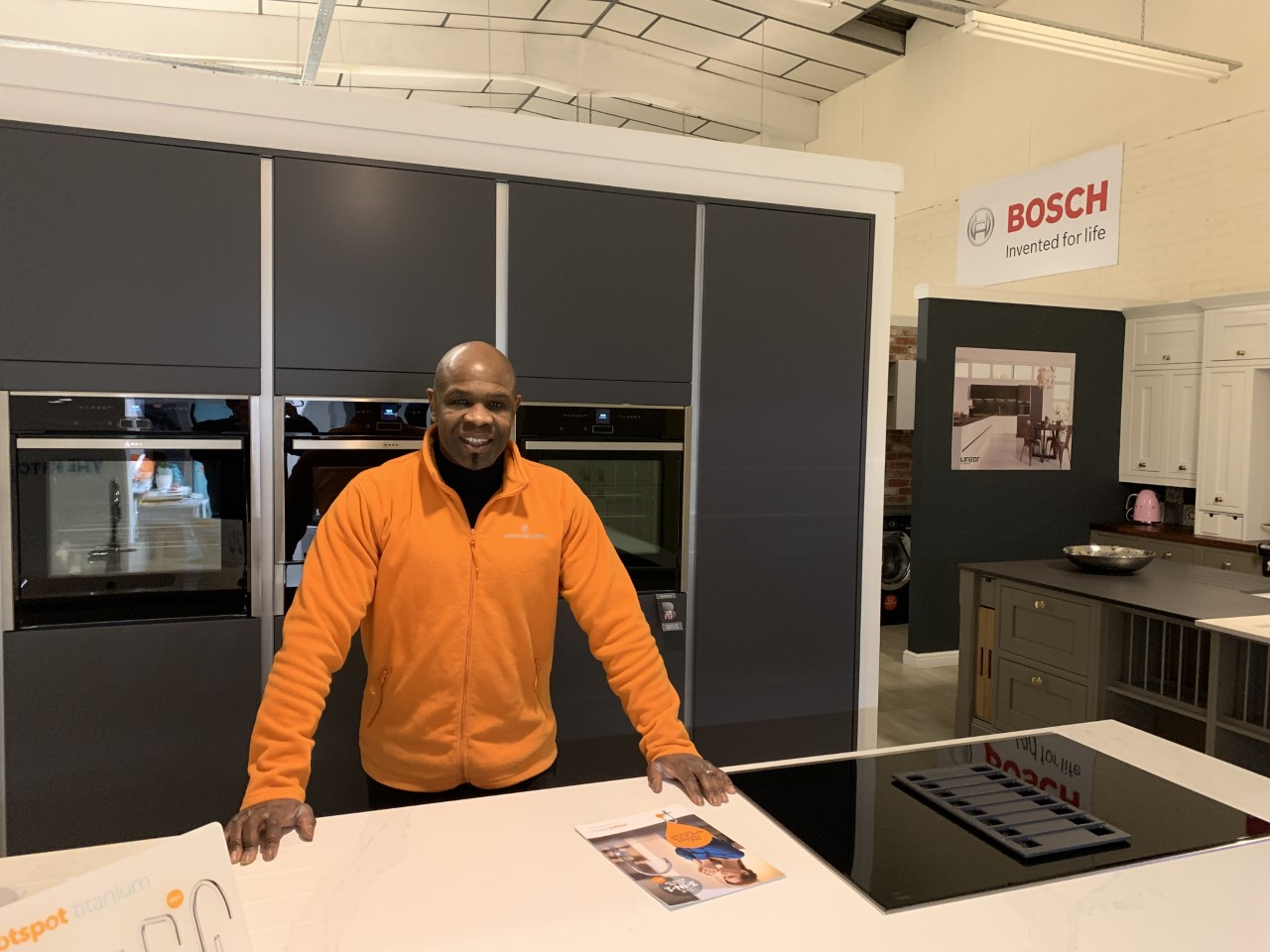 FOR a man who has never allowed his career to be defined by colour, there is an awful lot of orange in Glenn Webbe’s office.

Within the four orange walls of mission control at the Kitchen Bureau, last month, orange desks are adorned with orange lamps, orange folders and even orange staplers.

Dressed on brand in a bright orange fleece, Glenn invites me to take a seat in an orange gaming chair, before flopping into one of his own. He looks tired.

“It’s the Christmas panic,” he says in his thick South Wales accent. “Customers changing their minds, changing them back again – it can get a bit mental at times.”

The Kitchen Bureau – in Stadium Close, Grangetown – is coming up to its second year in business. Despite his heavy workload, sales director Glenn, who has worked in kitchen retail for nearly 20 years, is happy.

“I’m really enjoying it, though it’s definitely more stressful than rugby!” he laughs. “You’re only lining up against a 6’7 second row there, not dealing with anxious customers.”

Oh yes, we’re here to talk rugby. Although his athletic frame suggests otherwise, Glenn looks so at home in the world of kitchens that it’s easy to forget he’s a former player.

And not just any player. A 14-season club career starting in 1981 with Bridgend RFC saw him establish legendary status at Brewery Field, scoring close to 300 tries in 404 appearances.

His club form eventually saw him break into the Welsh international set-up, where he earned 10 caps and, most notably of all, became his country’s first black player.

It’s a tournament of which he has fond memories, having been part of the Welsh squad at the first World Cup, held in New Zealand and Australia in 1987.

“Being part of that tournament was easily the highlight of my career,” he smiles.

“The game then was still purely amateur, so the idea of playing against all the best players in the world was phenomenal.”

Glenn admits he was starstruck at the tournament’s opening ceremony at Auckland’s Eden Park.

“Looking around that arena, it was a who’s who of world rugby. I spotted John Kirwan there, and he asked me how I was.”

“It was surreal, but it made realise that I was an international too. That sort of recognition from my peers gave me a real sense of achievement.”

Glenn famously made his mark on the world stage in Wales’ pool stage match against Tonga – not that he remembers all of it.

Two early tries had put him firmly on course to become the first Welshman to score a World Cup hat-trick.

But, this was almost scuppered as, hurtling down the right flank, the flying winger was – in his own words – “completely poleaxed” by Tongan full-back Tali Ete’aki, with the pair clashing heads at speed.

Out cold, it took some time for Glenn be re-animated by the physios, but there was no chance of him coming off, with Wales having already used their two reserves.

“Management said ‘keep Glenn on, but keep the ball away from him as he’s not sure where he is’.”

His teammates didn’t listen – and it’s a good thing they didn’t. Minutes later, the groggy winger ran the length of the pitch to touch down under the posts and put his name into the record books.

“I’ve seen that try many times, but I can’t remember it – it’s like a void in my mind!” he laughs.

Despite his try-scoring exploits for club and country, Glenn is unsure what his legacy is, if any.

He settles on “competitive clown” – someone who worked hard, but enjoyed a laugh even more.

This is interesting. Knowing Glenn’s rugby journey, it is tempting to assume that he would view himself as a trailblazer. He doesn’t, but understands why people do.

“There was a time when I wasn’t involved in the international set-up, and I knew I was performing well,” he says.

“I didn’t know why I was getting overlooked, but the argument a lot of people put to me was that it was because I was black.

“I could have listened to them, but instead I persevered, and was finally selected for Wales in 1985.”

As we talk further about race, however, it becomes clear why he holds his humorous character above all else – it acts as his defence mechanism.

A local derby with Maesteg in Webbe’s second season at Bridgend sticks in his mind.

“I was standing out on the wing. The crowd were taunting me – ‘Webbe, Webbe, Webbey!’ I looked around, and someone threw a banana at my feet,” he recollects.

Rather than protest, however, Glenn picked the banana up, peeled it and ate it, before throwing it back into the crowd.

“From that, the spectators started cheering, and the whole thing was defused by a simple action. When you’re faced with that kind of abuse, sometimes laughter is the best medicine,” he says.

“I know people are trying to hurt me, and I have a choice to either take offence or don’t. So I personally find these sorts of incidents funny – I know they’ll never get to me.”

But, in today’s social climate, is this still a viable way for sportspeople – or anyone – to deal with such abuse?

“I know it worked for me – I had to fight my own battles. But things have changed – today, people are so quick to take offence,” he says.

“But, I still think people should own their identities, shake it off and turn what others see as a weakness into their strength – the racists won’t win that way.”

It’s an interesting take – but one I’m surprised at. Even if this is a way of dealing with abuse, surely more should be being done to stamp it out in sport in the first place?

Glenn agrees: “To cut it out, something very big will have to happen,” he says, as our conversation draws to a close. “Teams being docked points for a fan’s behaviour, that sort of thing.”

“Ultimately, if they really want to change anything, the people in charge must be prepared to make life-changing decisions.”