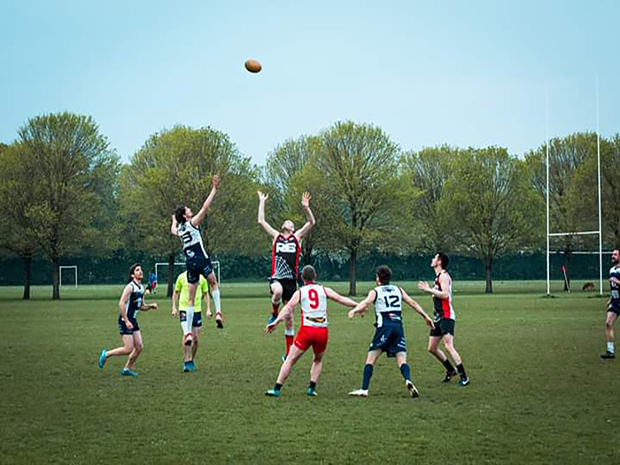 THE first Australian Rules football tournament to be held in Wales has been postponed due to heavy rain.

The Dragon Cup was going to be held at Blackweir on Saturday, but the recent heavy rain has forced Cardiff Council to close the pitches.

Teams from London, Bristol and Bath were told the tournament was suspended a day before it was due to take place.

Oliver Rees, 25, of South Cardiff Panthers, Wales and Great Britain, said: “It’s obviously a massive disappointment to have to postpone the tournament, but sadly we can’t control the weather.”

The cup is likely to be held in May, closer to the start of the Aussie Rules playing season.

However, the Panthers play a nine-a-side version of the game on rugby pitches because of a lack of players and available pitches of that size.

The Dragon Cup will be held annually and is hoped to be a sign of things to come for the sport in Wales.

“We are looking to try and host the nine-a-side international competition next year,” said Oliver.

“That’s one of the reasons why we’re setting this competition up to show that Wales can host a tournament.

“I don’t think the postponement will affect the confidence that Wales can host future tournaments.”

The Panthers compete in the Welsh Australian Rules Football League, but the league only contains Cardiff, Bristol and Chippenham.

The Panthers are current champions and will travel to Amsterdam to compete in the Champions League against all European champions in April.

As one of the only teams based in Wales, the Panthers provide many of the players for the Welsh international side.

Recently, the men’s side had three players called up to play for the Great Britain team in the July international cup. They are Oliver, Calumn Newman, 28, and Owain Ryland, 29.

Oliver said the Dragon Cup would be tough for the Panthers.

“We’re good at nine-a-side and have a lot of new faces and a lot of experience mixed in. West London are probably the best team in Europe at the moment, so it’s going to be good.”

Women’s Aussie rules on the rise

THE Panthers’ women’s team has had five players selected for the Great Britain team – two more than the men.

Carissa, of Wales and Great Britain, is vice-president of the Panthers women’s side and a former Wales international badminton player.

“There’s been a shift in mentality in the team, particularly with the women,” she said.

“Because we’re such a new team, we’ve kind of been the participation team but we’ve shifted towards being competitive. We’re still really social, but we have performance goals now.”

While the focus has slightly shifted due to the team’s success, the social culture is a huge reason why players stay in the sport.

Carissa said: “Obviously, when you’re on the pitch you’re going hell for leather, but once you’re off there’s no pettiness.

“It’s just a lot of fun, it’s a really tough game but it’s got such a lovely feel to it. I think that’s why we get more and more people and retaining them too.”

The Panthers work closely with Cardiff Metropolitan University and their women’s team, often training with them and coaching them.

With the extra coaching, the Cardiff Met women’s team has gone from finishing bottom of the university league to topping it within a year.

The relationship is beneficial for everyone, with taster sessions bringing in around 50 people at a time to try the sport out.

Realistically, there will be around 10% of those staying for longer than one session.

It is still a huge boost considering that three years ago, the women’s team only had three players.

Now with about 25 players, the squad is one of the strongest in the Welsh Australian Rules Football League.

They must travel further than the men to play games, because of the lack of established women’s sides nearby.

This makes playing the game a lot more costly, despite the relatively low membership fee of £50.

However, Carissa said: “I don’t think it has that much of an impact on attendance. The club try and subsidise as much as they can, but really if you want to do something, you will.”

Thanks to recent results, Carissa is confident that they will be one of the main contenders for the cup in May.

She said: “It’s going to be a really good experience for us playing against London sides, because they’ve got a lot of Aussies in their teams.

“It will definitely be a new challenge for us, but one that I think we’ll be more than capable of tackling.”

The return of the Double Blues

THE postponement of the Dragon Cup has greatly affected the revival of the Double Blues, a team from the past wanting to return to prominence.

Cardiff Double Blues disbanded six years ago due to dwindling numbers. But Rhys Silver, 28, who used to play for them, has revived the team.

” They’ve not had a chance of playing a game yet, so the cup would’ve been our chance of a pre-season and to set them in positions.

“There’s many places where we could go on a 3G pitch under cover, but they are only catered for football. There doesn’t seem to be any sort of recognition from the council that this sport exists.”

Rhys said: “My career is sort of coming to an end now because of my age, so I wanted to build up another Cardiff team to compete in the league.

“We’ve got a home ground already, we’ve got the full kit from when we played before, it’s just getting players on the pitch now.

“We even had funds left over from when we were originally a club, so far we’ve not really had a need to spend money.”

The main issue facing the Double Blues is getting the word out that they are back and attracting the players, as so far, they only have eight.

For the Dragon Cup, Bristol Dockers and Bath and Wiltshire Redbacks would have teamed up with the Double Blues so that they had enough players to compete.

The composite team would have played in the Double Blues’ kit in a bid to raise the profile of the club.

Rhys said: “It’s really nice to see that everyone has come together to build the Blues back up. Panthers have been advertising for players and been giving them the option to come and play for us as well.

“It’s good to see the other Cardiff side not just discounting us straight away. They’re trying to get another team going and at the end of the day, it makes the league and national side stronger.”

While success in the Dragon Cup in May will be unlikely, Rhys is confident that the Double Blues will soon be challenging for silverware.

“At the minute it’s just building up numbers and challenging to show we’re not here to be the whipping boys of the league, he said.

“I’m hoping in the next two or three seasons we will be challenging for the grand final and win the league.”