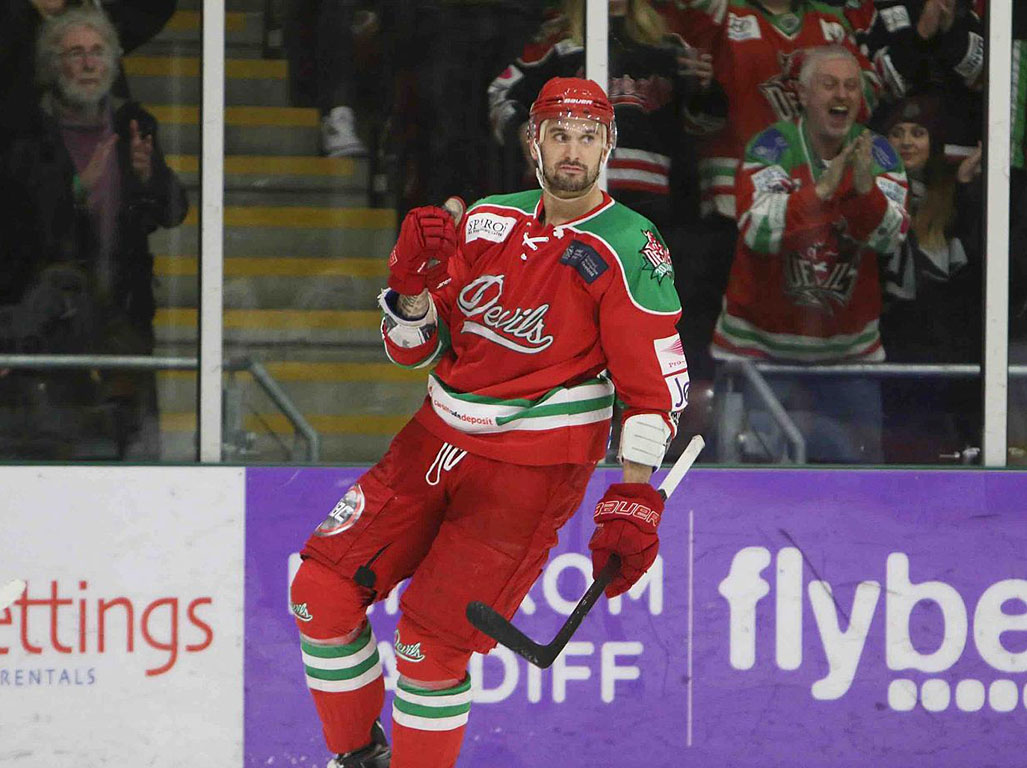 THE battle for Cardiff Devils’ first ice hockey league title has intensified after a winning weekend for them and their nearest rivals Belfast Giants.

Both teams secured two wins which means the Devils remain at the top of the league, one point ahead of the Giants.

On Saturday, the Devils won 5-0 against the Nottingham Panthers, a team that had previously given them a lot of trouble. The last time the two teams met, the Panthers won 5-2 and before that, the Devils were thrashed 8-0.

The Devils went on to continue their strong performance by beating the Fife Flyers 2-1 on Sunday.

Their game against the Panthers saw goalkeeper Ben Bowns stop 27 shots for his first shutout of the season. The Devils also dominated offensively, scoring three goals in the first period alone. Cardiff Devils against the Nottingham Panthers.

Despite a switch of goaltender and a powerplay opportunity for the Panthers which gave them the man advantage, they could not find the net and equalise.

In the final period, goals from Patrick Asselin and Layne Ulmer, who set up three goals throughout the game, made it 5-0 to the Devils.

Another confident performance followed on Sunday as the Devils scored two goals against the Flyers, one on the powerplay and another while outnumbered by the opposing team.

Despite a goal by the Flyers in the third period, the Devils managed to hold on. Ben Bowns had another strong game, stopping 32 out of 33 shots.

Meanwhile, the Belfast Giants took four points home after two victories against the Sheffield Steelers, the team that won the league last season.

Cardiff Devils player Andrew Lord said their game against the Panthers was an improvement over the previous weekend.

“The first period was phenomenal. One of the best periods of the season- the pace we played at, constantly moving our feet. Overall we’ll take it and it’s a step in the right direction,” he said.

The Devils’ lead comes after a particularly strong season for the team, who have now won 26 out of their 36 games.

With the end of the season approaching in March, every match will matter if the Devils hope to triumph over the Giants and win their first title. The Sheffield Steelers are eight points behind and could still prove to be serious contenders.

The Devils’ next game will be away against Nottingham Panthers on Saturday before they face Manchester Storm – who beat the Devils 3-2 last time out – at home on Sunday.