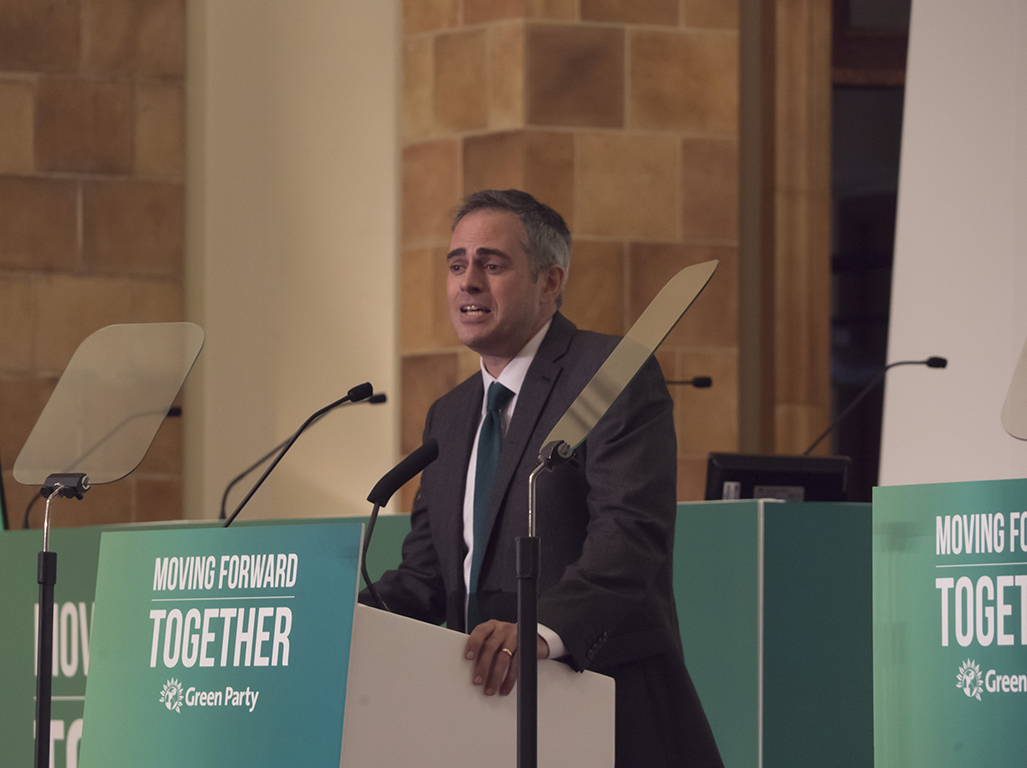 CO-LEADER of the Green Party Jonathan Bartley discussed Trump, Brexit and issues closer to home during his visit to Penarth today.

The two held a ‘Meet the Greens’ coffee morning and talk in the Paget Rooms before speaking to Penarth residents at a street stall later in the day.

A variety of topics were discussed at the talk including the refugee crisis, the future of the left and new US President Trump.

In particular, Mr Bartley was critical of Theresa May’s visit to see Mr Trump last month and had his own thoughts about how Britain should deal with the newly elected President.

“You’ve got to be realistic and pragmatic. You’ve got to engage with America but we didn’t have to be first in the queue,” Bartley said. “We would have taken our time. We wouldn’t have just rushed over there.”

He was also critical of Trump’s attitudes towards refugees and migrants.

“Our response to the refugee crisis in Calais wouldn’t have been to build a wall.” he said.

Mr Bartley also acknowledged the left needs to change in response to Brexit and Trump’s rise to presidency.

“Both the Green Party and UKIP recognise neo-liberalism is failing but the problem is UKIP are blaming migrants. It is up to the left to put up an alternative vision.”

Later in the afternoon, both politicians spoke to Penarth residents at a street stall outside Windsor Arcade.

In an interview with The Cardiffian, Mr Bartley spoke about House of Commons’ Speaker John Bercow’s decision to voice his opposition to President Trump giving an address to Parliament.

“He was absolutely right in doing that. Our MP Caroline Lucas welcomed it yesterday. It’s clear that Trump shouldn’t have a state visit as far as we are concerned. Theresa May looked very desperate running over there so quickly,” Mr Bartley said.

“It seems like we’re going cap in hand to America.” Mr Bartley also discussed the housing market after the government admitted the current market was ‘broken’ and pledged to build thousands of more homes in today’s housing White Paper for England.

“There is an issue of supply but there’s a bigger issue which is the fact that buy-to-let investors have been allowed into the market to treat housing like a commodity rather than homes,” he said.

“What we would do is remove tax breaks for buy-to-let investors- that’s the subsidy that they get. We will use that money to create deposits for new council housing and we would lift the cap allowing local authorities to borrow against those deposits. The interest on those loans would then be paid of by housing benefit.”

Mr Bartley also went on to explain how he thinks the left can make a comeback.

“The left needs to be post-tribal and move beyond the old tribalism. I think what marks the huge spike in Green Party membership; the huge number of people joining Corbyn’s Labour and the increase in SNP membership has been younger people who have not been tainted by the old tribal politics.

“They’re joining these parties because they see hope.

“When these parties came together in the referendum, it was the first time they were campaigning side-by-side and they started to discover each other not as political opponents but as allies. I’m hopeful out of this there may be some space for alliances.”