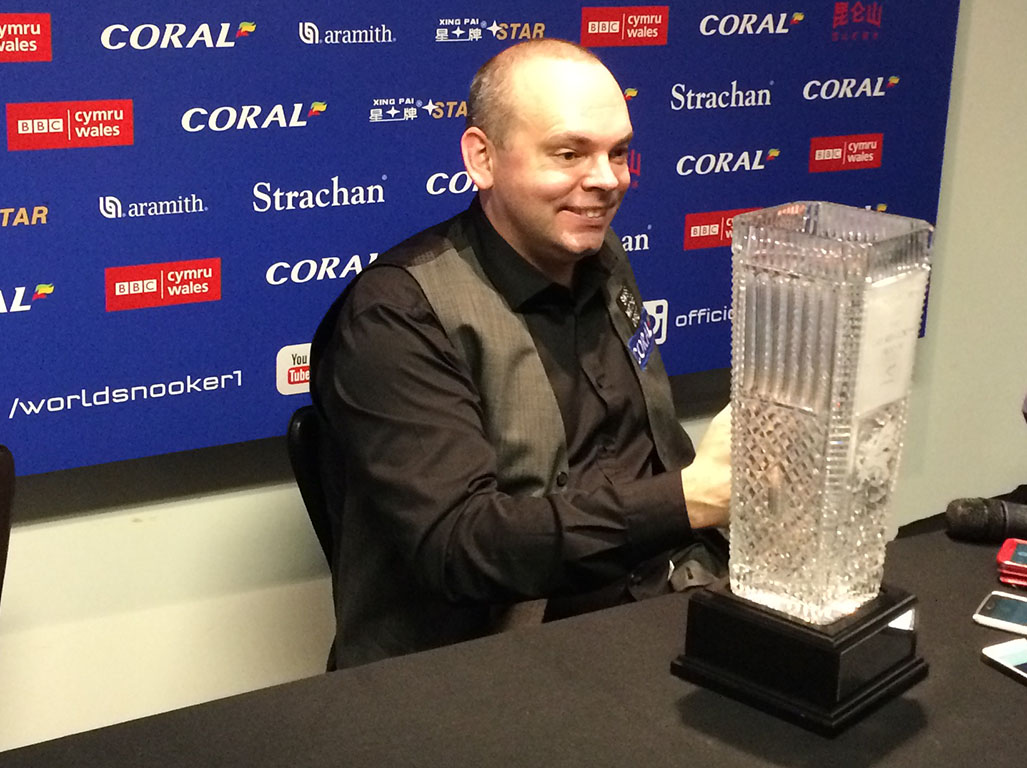 World number two Bingham took a 4-0 lead but later found himself one frame away from defeat in Sunday’s best-of-17 contest.

Yet Bingham battled back to win the last two frames of the match and claim the Ray Reardon trophy, securing his first ranking title since the 2015 world championship.

“I think it was grit and determination that got me a win tonight. It means a lot to me. It’s been tough since the world championship win,” said Bingham, 40, from Essex, who had a tear in his eye after the match.

In each of the first two frames it was Bristol-born Trump, ranked fourth in the world, who got out of the starting blocks more quickly.

He went 45-0 ahead in the opening frame and 64-0 ahead in the second, but on each occasion a failure to convert a straightforward pot allowed Bingham back to the table to steal the frame.

Bingham then made a break of 74 to make it 3-0 before moving 4-0 ahead by the mid-session interval. Bingham kisses the Ray Reardon trophy after a 9-8 triumph in the Welsh Open final. Reardon (right) watches on.

However, after the break, Bingham was a changed man — he had started making mistakes.

Trump was all too happy to take advantage, sweeping up after Bingham to win the fifth frame and then making breaks of 68 and 58 to sew up the sixth.

The scoreboard read 5-3 in Bingham’s favour by the close of the afternoon’s play, teeing up a tantalising finale.

When the players emerged for the evening session, they did so under the gaze of six-time world champion Ray Reardon, 84, from Tredegar, after whom the Welsh Open trophy is named.

While Reardon’s presence might have added a little extra pressure for the competitors, that pressure did nothing to harm the spectacle for the capacity crowd, who were treated to a nip-and-tuck duel.

Trump started the stronger, winning his fourth frame of the day to close the gap to one. And when lining up the black in the next frame at 48-0 to the good, he looked like he was well on his way to levelling the match. But the black stayed in the jaws of the pocket and just as happened in the first two frames of the tie, Bingham returned to the table to snatch the frame from Trump’s grasp.

Trump bounced back immediately, taking the next two frames.

Bingham then won a 34-minute-long frame to edge 7-6 in front, but again Trump recovered and restored parity. At seven frames apiece and 46-46 in the 15th frame, Trump was faced with a green requiring the finest of cuts over a middle pocket.

The cheers when the ball dropped were perhaps the loudest of the evening from a crowd which had been lively — yet respectful — throughout.

Trump potted brown, blue and pink to go 8-7 in front — the first time he had led in the match — and greeted the occasion with a fist-pump.

What followed was a 40-minute-long epic of a frame.

With just the colours remaining, the score was 44-43 to Trump, who was closing in on the finish line. However, after a lengthy tactical battle featuring misjudgment and brilliance in equal measure, it was Bingham who took the frame, making it 8-8.

So it was to be a deciding frame for the title.

At 24-14 up, Bingham missed a black off its spot — and by some distance. The Motorpoint Arena is not the Crucible, but it was performing a striking tribute. This was tense.

The tension ratcheted up another notch when Trump’s stay at the table took him no further than 25-24 ahead.

Taking the game by the scruff of the neck, Bingham knocked in a superb long red to kick-start a match-winning break of 55, clearing all but the black.

After the match, Trump paid tribute to Bingham’s efforts.

“Stuart has done exceptionally well. After winning the world championship there was a bit of pressure but now it looks like he’s back to his best and he’s a well-deserved winner,” he said.

Bingham received the Ray Reardon trophy from the man himself, as well as a cheque of £70,000.