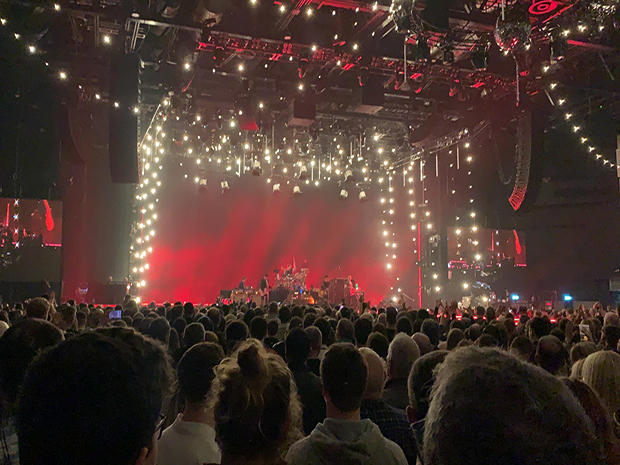 A STEREOPHONICS fan admitted he may end up regretting going to the band’s concert last Sunday despite the Coronavirus pandemic.

While other artists, such as The Who, cancelled their scheduled events in Cardiff, the Welsh band went ahead with consecutive performances at the Motorpoint Arena on Saturday and Sunday.

Lloyd Pike, 21, attended Sunday’s concert despite the risks and said it might be the last social event he goes to in a long time.

“I bought the tickets and I might end up regretting it, but I thought about it as the last time I’ll go to a concert or anything like that in months,” he said.

“At the end of the day, people in high positions decided it could go ahead.

“My mum wasn’t very happy with me going. I jokingly said ‘Life isn’t about waiting for the storm to pass, it’s about dancing in the rain’. She didn’t like that.”

Mr Pike said there were no additional precautions for those who attended, although there was a general effort for better hygiene.

“There wasn’t anything extra in place like soap or anything, other than for the stewards and ticket people, they all had hand sanitiser by them,” he said.

“Having said that it was the first time I’ve seen people queuing to wash their hands in the toilet,” he added.

“It’s what I’ve felt everywhere to be honest, just a lot more people thinking about hygiene.”

The concert went ahead before prime minister Boris Johnson’s advice yesterday to avoid all non-essential contact with others.

While Mr Pike chose to go to the Motorpoint, he believes others decided to stay away.

“They said it was sold out, but I’ve been in there when it’s sold out and it definitely wasn’t,” he said.

Lead singer Kelly Jones has come under scrutiny for hosting the performance and he addressed the Coronavirus while on stage.

“He was making jokes about it on the stage, just trying to make light of a bad situation. There was nothing bad in the jokes and people were laughing,” he said.

The band tweeted out a video from Saturday’s concert and received a lot of backlash.

Journalist Vonny LeClerc said: “I hope all that money helps ease your conscience. This is so unbelievably irresponsible at a time of the worst public health crisis the country has ever seen.”

Another Twitter user Louise Mensch said: “Was interning in the music industry before I was 18; never saw such selfish disregard for the fans in my entire life.

“You should be pariahs. I hope it was worth all the infections this tour caused.”

Not everyone was against the show going ahead though.

“Amazing concert. Nice to forget everything happening with the real world for a bit and get lost with you,” David Clifton said.

Kay Hudson said: “Don’t have a go at the ‘Phonics. If the government is not closing schools, gyms, the public transport system, or borders, why cancel a gig?

“People are far more likely to go to school or work if they feel ill than to socialise or go to concerts in my experience.”

The Motorpoint Arena said they are following official guidance from relevant bodies, but events will continue to run.

“At this time, all shows and events are going ahead as planned.

“Please be assured that the safety and health of all staff and visitors, is our main priority and we are implementing recommendations and instructions appropriately.”