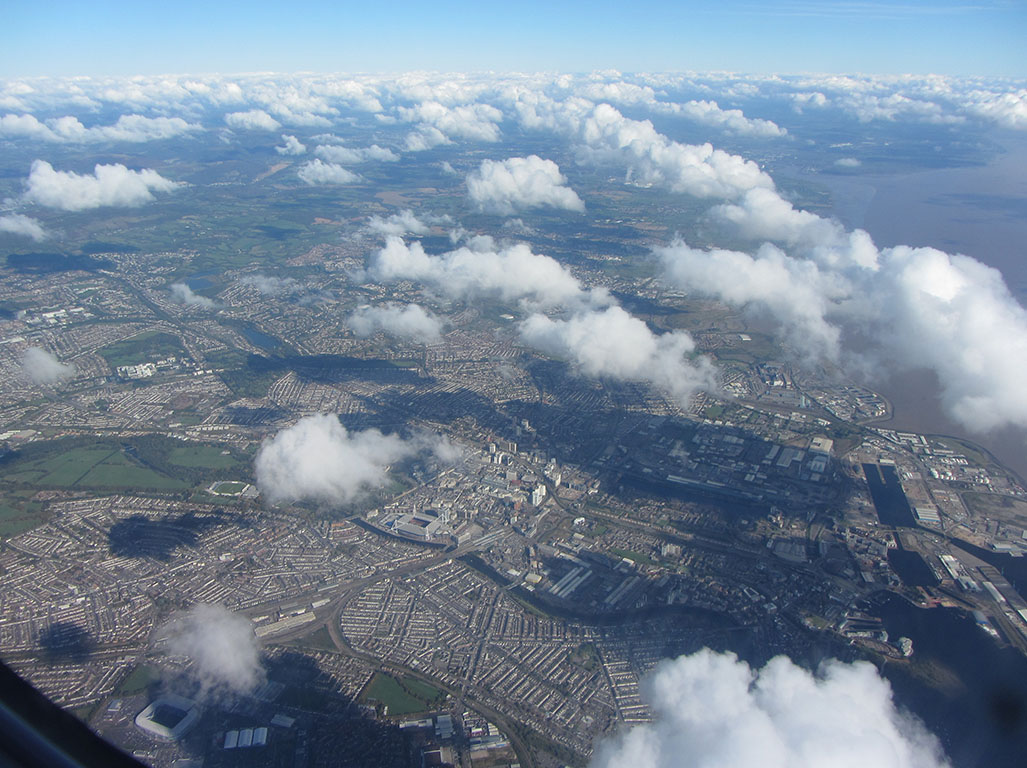 Cardiff City from the sky. Concerns have recently grown over levels of pollution in the city’s air.

WHEN you think of Penarth, the Garden by the Sea, toxic air and exhaust fumes are probably not the first things that come to mind.

However that’s the reality for the residents of the town’s Windsor Road, which has gained a reputation as being a notorious dirty air hotspot.

As the main route between Penarth town centre and Cardiff, Windsor Road in the Cogan suburb sees high levels of congestion throughout the day.

Levels of harmful nitrogen dioxide and other pollutants from vehicles often exceed limits set in the Air Quality Regulations. It is currently the only place in the Vale of Glamorgan that is classed as an Air Quality Management Area (AQMA) where pollutants are tracked by an air-quality monitoring station.

Cogan residents have long expressed concern over the levels of air pollution and traffic that they are forced to endure.

One of those residents is Colin Teague, 74, who has been living in Penarth for 26 years and lives on Windsor Road.

“It’s horrendous getting out of here in the morning. From 5:30am the traffic is constant with all the lorries.” Mr Teague said: “In my view they should open the Cardiff bay barrage in the morning from seven to nine for traffic. It would make a massive difference.” Windsor Road has constant issues with levels of traffic and air pollution.

“First Minister, I’d invite you to walk though Cogan if you want to really experience poor air quality. It’s quite astonishingly bad there,” said Mr Melding during the meeting.

Air pollution in Penarth was also a top priority for Anthony Slaughter, a Green Party candidate running for councillor in May.

“The air pollution issue is a really tricky one,” said Mr Slaughter on the issue. “There’s not one simple answer to it – we obviously want better sustainable public transport. One practical thing that could happen, if the Vale council works together with Cardiff Council, is cleaner buses.”

However, Windsor Road’s struggle with toxic air and heavy traffic is emblematic of a wider issue that Cardiff currently faces.

Last week, the European Commission sent a “final warning” to the UK over breaches of air pollution limits in cities such as London, Birmingham, and Glasgow.

If the UK does not clean up its act, it could face a trip to the European Court of Justice as well as hefty fines.

London in particular continues to struggle with managing levels of air pollution — it took just five days in 2017 for the city to exceed its annual pollution limit. Deaths linked to long-term exposure to London’s air pollution are estimated to be 3,389 each year, according to a report by Public Health England.

While Wales’ own capital was not one of the areas included in the list, that hasn’t stopped concerns over toxic air in the city centre and beyond.

Poor air quality is linked to conditions such as respiratory diseases and is estimated to kill 143 in Cardiff each year. Furthermore, Cardiff is the fastest growing city in the UK, with an expected population rise of 80,000 between 2006 and 2026 and 40,000 jobs to be generated. This increase in population is to be accommodated by housing developments proposed in Cardiff’s Local Development Plan, which includes plans for thousands of new homes on greenfield sites.

With this expected rise in population, housing and traffic, there are concerns that Cardiff’s air quality could worsen considerably in the future and severely impact the health of residents.

Attention has recently shifted then to what could be done to ensure Cardiff’s future isn’t one marked by toxic air and congestion as a result of the city’s dramatic growth.

Last month, Cardiff Council unveiled its 10-year strategy to turn Cardiff into a cycle-friendly city as part of an ambitious endeavour to become Europe’s most “liveable” capital city.

The strategy aims to reduce traffic by getting half of all the city’s commuters cycling, walking or using public transport by 2026.

The council’s report for the strategy cites health as one of the main reasons behind its creation. The report states: “Improvements to local air quality through reducing unnecessary car trips will have a significant impact on health.”

Since announcing their strategy, Cardiff Council have launched a public consultation into their proposed cycling routes. The proposed cycling routes under the council’s 10 year cycling strategy.

On Thursday, the second of these public consultation events was held in Cardiff City Hall, where members of the public were given a chance to have their say and leave feedback.

Cyclist Steve Castle, 41, from Penarth was one of the residents at the event and was hopeful that the new cycling routes would bring positive changes to the city.

“I had a read through of the strategy when it was first announced and liked most of what I saw. I feel it’s for people who want to cycle but don’t currently,” he said.

I hope it doesn’t get watered down. If that happens you lose the momentum. The routes would be great for things like air pollution and congestion.”

Mr Castle said he started cycling seven years ago due to traffic problems in the city.

“It was taking me an hour to drive from Penarth to Llandaff. We’ve got a big problem with traffic in Cogan,” he said.

Cycling has helped to improve my lifestyle, the way I feel in the morning and my well-being though. I cannot tell you how much it’s made a change in my life.”

Other organisations are also pressing for other ways to combat dirty air in the city.

Chris Brown, Friends of the Earth Cardiff co-ordinator, says the group are campaigning for Cardiff to get Clean Air Zones and outlined other ways Cardiff could reduce levels of toxic air.

For now however, the residents of Windsor Road can only hope that the council delivers on its ambitious promises.