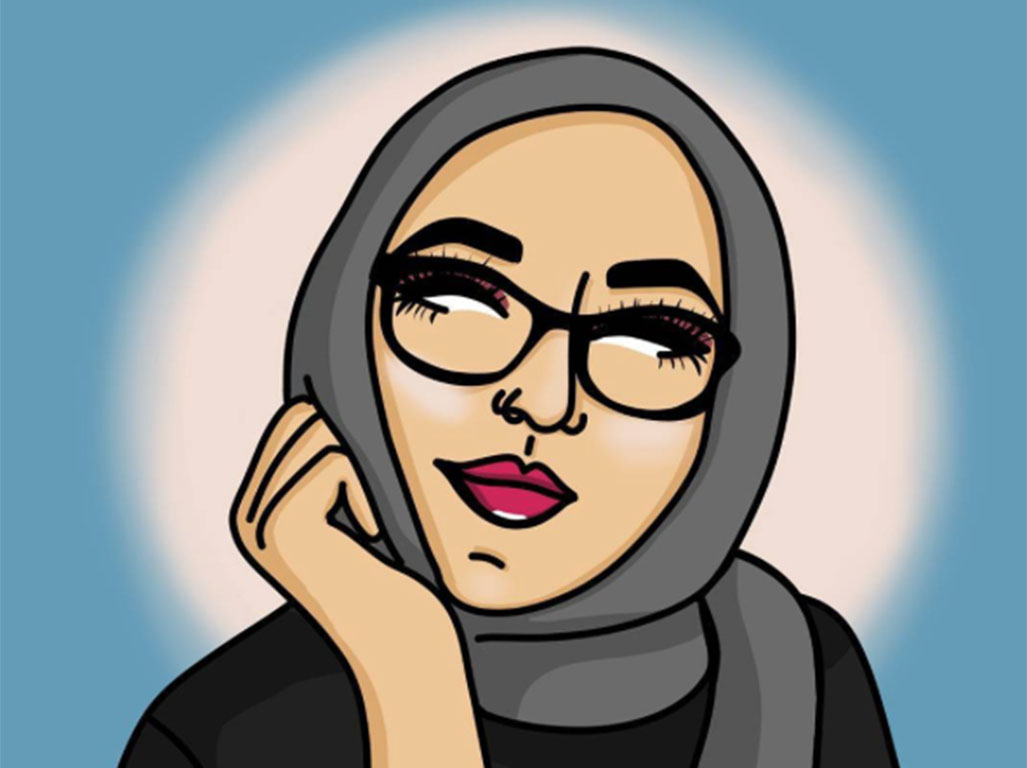 A CARDIFF poet aims to challenge stereotypes about feminism through a series of artworks.

Hanan Issa, 30 has collaborated with London based artist, Nasima Ahmed to create poems and images demonstrating the concepts of feminism and equality.

Ms Issa described the process that she and Ms Ahmed went through to make the artwork and what inspired them to create it.

She said: “We wanted to explore three different ideas through a poem and an image. So the best way was for me to write a poem first and then send that to Nasima.

“She would then illustrate based on the subject of the poem. So one is about how we build walls of difference and that’s essentially where equality gets a bit fuzzy.

“Another shows a group of people with their hands clasped together. They represent the different types of people in world who need to stand together. That’s what we felt feminism was about.” Hanan: “It is about how we build walls of difference.”/ Attributes: Nasima Ahmed (Moosleemargh) Hanan: “They represent the different types of people in world who need to stand together.” / Attributes: Nasima Ahmed (Moosleemargh)

Ms Issa said that she got in touch with Ms Ahmed after the Cardiff Women’s March, which took place in back in January.

“I came across her artwork and was just wowed by it. It’s this really lovely mixture of pop art, anime style. It’s really gutsy and in your face.

“Both of us started talking about our own thoughts on feminism and equality. We were both fed up with people telling us that we had to adhere to the angry feminist stereotype.

“We were also fed up of people from our communities telling us that we shouldn’t be feminists because women already have equality. So that’s why we started this project.”

Ms Issa also said that it was possible to be both Muslim and feminist because she felt that her beliefs in gender equality fitted the rules and regulations of her religion.

Much of Ms Ahmed’s artwork focuses on the gender inequalities that Muslim women face from wider society and from their own communities.

Wow, I made this months ago but I didnt share because I felt like I'm exposing myself too much… and yet, social anxiety is so common. You know how relieved I was to find out that this was a thing and that I wasn't just weird? All those years in school I would feel so stressed about being around people and never knowing how to act so I just end up being awkward or reserved. At events or social gatherings I'm always glancing at the exit. Introducing myself to people is stressful because I grew up with a speech problem. My second year of university was the worst period for social anxiety. Sometimes people interpret it as you being shy or too quiet (which I am also!) But they don't understand the mental stress that being in public can sometimes cause. Sometimes it takes a lot of 'hyping myself up' to even leave the house. Idk, I just hope that this image relates to some of you guys and can convey your feelings too. #Moosleemargh #Illustration #SocialAnxiety

Ms Issa said: “There are lots of different types of feminism. The two concepts of being Muslim and feminist are quite fluid in their definitions because they are open to interpretation.”

Ms Issa and Ms Ahmed’s work will be showcased at the International Women’s Day event in March. They will be distributing stickers with their artwork on at the event.

The event is organised by the Women’s Equality Network Wales (WEN). It is an organisation funded by the Welsh government to help improve the lives of women in Wales.

Melissa Wood, Co-Director, WEN Wales said the event is one of the organisation’s biggest and that there is a massive need to create a space for women’s voices.

She said: “I’m really excited about the events we have organised this year. We have such a mixture of amazing, inspirational speakers and performers from Wales taking part.

“Recent events such as the Women’s march show that young women are keen to engage with and speak up about gender issues.”

Ms Wood said that the main aim of the event is to praise women’s achievements and to showcase the diversity of people that live in Cardiff and in Wales. The event is one of WEN’s biggest events/ Attributes: WEN Wales

She said: “Whilst we want to celebrate how far women have come, we also want to raise awareness of the barriers that still remain and how we can tackle them together.

“The gender pay gap and the struggle for workplace equality. The lack of representation of women in political and public life. Violence against women and girls These are still huge issues in Wales.

“We need to ensure that the voices of women and girls are heard by government and decision makers in Wales. These are just some of the areas that we are working to influence.”

Ms Issa said:  “International Women’s Day is essential for us to recognise and celebrate the contributions women have made and continue to make to the betterment of this world.

“Too often we are faced with the multitude of inequalities women face across the globe. IWD is an important balance to this and reminds us that there are so many things to celebrate in herstory!”