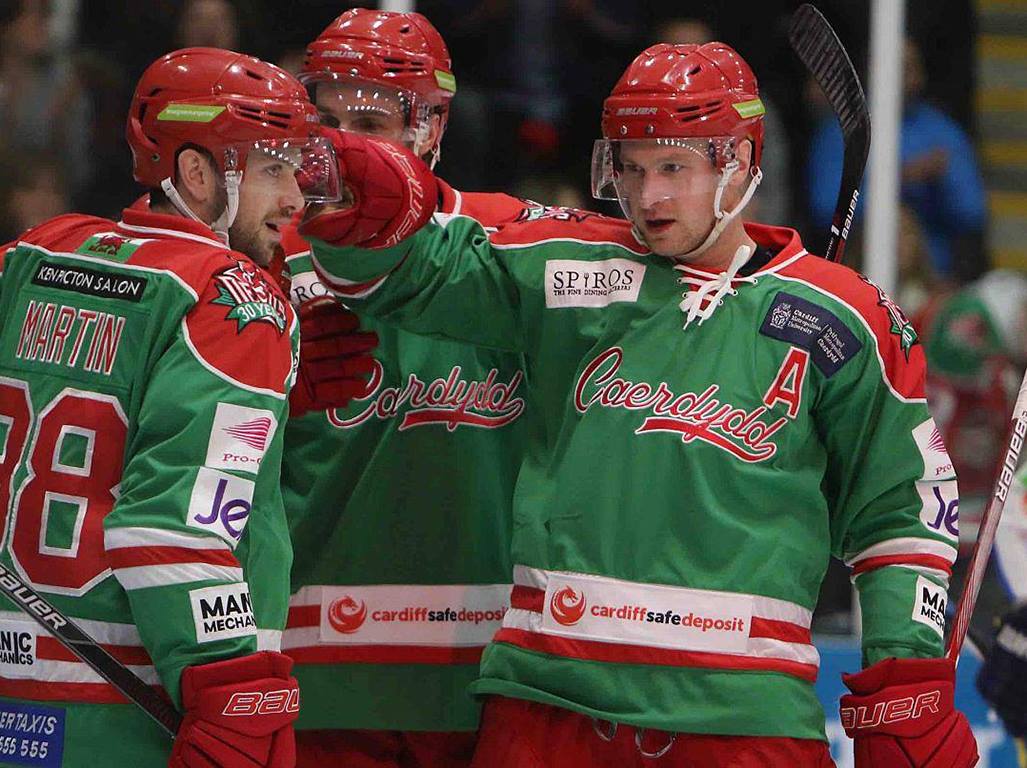 Cardiff Devils in their special edition green jerseys on Saturday.

CARDIFF Devils warmed up for this weekend’s Cup Final with their fifth four-point weekend in a row after defeating both Coventry Blaze and Edinburgh Capitals.

The two wins, which extended their lead at the top of the league table, were the perfect preparation for the Devils’ appearance in Ice Hockey’s Challenge Cup final against Sheffield Steelers on Sunday at Ice Arena Wales.

Last Saturday, the Devils smashed Coventry 8-0 at Ice Arena Wales in a game which saw strong performances across the board.

Layne Ulmer scored twice in the middle period while man-of-the-match Ben Bowns saved all 20 shots from Coventry at the other end.

American playmaker Denny Kearney, who was signed by the Devils earlier this month, made a strong home debut in Saturday’s match, getting both a goal in the third period and an assist in the first.

Speaking after the match, Kearney was optimistic that his signing would benefit the team as they approach the end of the season in March.

“I try to make my teammates better, create space for them, find guys in the slot and then around the net I can usually score too so hopefully that continues,” said Kearney.

It was a closer game for the Devils when they came up against the Edinburgh Capitals on Sunday.

The match went to overtime after both teams scored twice, with the Devils’ Chris Jones and Patrick Bordeleau getting the goals.

However, after three tense minutes, the Devils’ Joey Haddad scooped up a loose puck and fired it past Edinburgh’s goaltender to score the winning goal.

For the fifth consecutive weekend, the Devils have won both their games and gained four points.

Their victories this weekend have extended their lead at the top of the league to seven points.

The Devils are hoping to win both the league title and the Challenge Cup in the same year for the first time in their team’s history.