Home > Where You Live > City > Meet the vendors: the challenge of selling on the streets of Cardiff

Meet the vendors: the challenge of selling on the streets of Cardiff 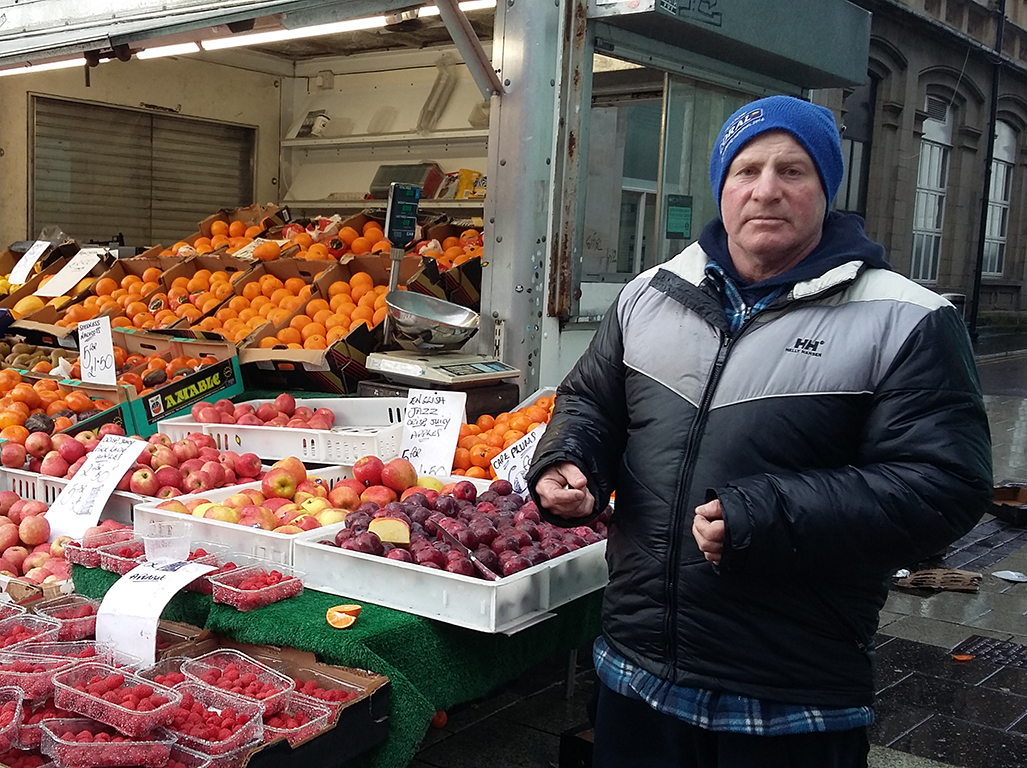 A rainy day on Cardiff’s Queen Street, where stallholders and street vendors ply their trade whatever the weather.

STREET vendors, Big Issue sellers, charity collectors — we have all seen them, and probably fobbed them off as we’ve walked past on the streets of Cardiff.

But what is it like to be one of them? Divisive though as they can be, the people who trade on the streets of the city are a part of its character, and have their own story to tell about the hard graft of trading outdoors.

“It’s hard for me to compete with the high street shops here on Queen Street sometimes,” said Claire Deakin, 33, who sells sterling silver jewellery from a mobile stall on Queen Street.

“They are always able to keep changing their stock constantly, but for me it takes time to build up that source of money to invest in new stock.” Claire Deakin with her sterling silver jewellery stall as she makes her way down Queen Street.

Claire added that the conditions of her licence make trading more challenging: “Because mine is quite an old licence the rules say I have to keep moving unless people are looking or buying.

“What’s difficult about this is it can potentially look like I am leaving the high street, but it is a very special licence to be able to trade here on Queen Street.”

Claire said her biggest problem is other traders who don’t follow the rules of their licences: “I have been doing this for 13 years, and in some towns they have banned street traders because a few people have not followed the rules.”

For other street traders, like Big Issue seller Richard Singh, 50, there are other problems.

“The position I am in is hard. Because I am homeless it makes it difficult to get a job,” said Richard.

“Selling the Big Issue helps me to get by every day, and it pays for me to stay in accommodation instead of sleeping in a car park.”

“Most people are friendly but there are some arrogant people too, and how we do usually depends on the weather,” Richard added.

“Normally by three o’clock I have enough money to be out of here, but today I might be here until eight or nine.” Martin Evans outside his fruit stall opposite the Capitol Centre, on a rainy day he relies on regular customers to keep up his trade.

For other traders like Martin Evans, 50, who runs the fruit stall at the east end of Queen Street, it’s all part and parcel of business in the city.

“This part of Cardiff is not as busy as most, and I would call it the recession end of the city, but five years ago it wasn’t like this,” he said.

“There used to be all sorts of shops in the Capitol Centre across the road but now a lot of the shops are empty.”

For Martin it’s all part of the life of the city, “It has happened in the past as well. The Hayes used to be really busy before St David’s Arcade opened, but now it’s quite quiet. Who’s to say how the city centre will change when the new BBC building goes up?”

For charity collectors like Damien Rowles, 21, from Bristol who works for Guide Dogs for the Blind, Cardiff has always been a difficult place to find people willing to stop.

“I have been coming to Cardiff with the charity for four years now, and I have always found it to be one of the most welcoming places in the UK,” he said.

“The trouble is the moment you put on a charity bib you get treated differently, almost as if you are not human.

“But sometimes people surprise you: the other week I was falling into a bad day and a lady stopped to tell me she donates to our charity because of the help our charity gave to her daughter after a car accident.

“Sometimes it just takes one person to stop and talk and it can completely change your day.”