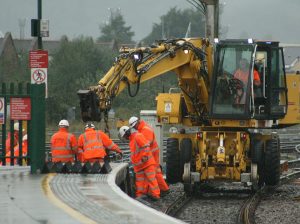 SOARING costs and poor management may see the electrification of the rail line between Cardiff and London cost taxpayers even more, MPs have heard.

A committee of MPs savaged the Great Western Line railway scheme, describing it as “a stark example of how not to run a major project”.

The Public Accounts Committee report attacked the project for a “staggering and unacceptable increase in the estimated costs of the Great Western Main Line electrification programme which rose by £1.2 billion in the space of a year”.

The committee report states that “it is not clear whether the Great Western electrification project can be delivered to the revised target of December 2018 and budget of £2.8 billion.”

The original plan was for the line to be completely electrified at a cost of £1.6 billion. The revised estimate of £2.8 billion does not take into account an accepted risk of losing a further £274 million, £49 million more than the £225 million set aside for contingencies.

Mark Carne, chief executive of Network Rail, was quoted in the report as saying that “every single part of the programme is absolutely on the limit”.

The Department for Transport announced in November 2016 that not all of the line would be electrified by December 2018.

Four stretches of track around Bristol, Oxford and the Thames Valley would be “deferred” until the 2019-2024 period.

Work to extend the electrification to Swansea has been delayed until 2024 at the latest. The department defended these decisions, arguing that commuters would feel the benefits of electrification anyway.

The committee responded: “The department’s claim that many of the passenger benefits of electrification can be obtained without electrifying the whole route raises questions about whether full electrification is the most appropriate way to achieve benefits for passengers, and value for money for taxpayers.”

The report alleged serious problems at almost every step of the project. By the time work had started “the initial design was incomplete, the cost estimating was not good enough and it had started construction before it had the necessary permits and consents.”

It clarified that “Network Rail [failed] to put in place an adequate plan to obtain 1,800 separate consents it needed from local authorities.”

The report also accused the department of “[failing] to challenge Network Rail’s plans effectively, despite the very significant sums of public money at risk.”

The department was revealed as being “liable to pay up to £400,000 per day to lease trains that could not be used until the overhead electrification was complete.”

Meg Hillier, chairman of the PAC, said: “Mismanagement of the Great Western programme has hit taxpayers hard and left many people angry and frustrated.

“This is a stark example of how not to run a major project, from flawed planning at the earliest stage to weak accountability and what remain serious questions about the reasons for embarking on the work in the first place.

“The sums of public money wasted are appalling — not least the £330 million additional costs the Department for Transport will have to pay to keep the trains running because of delays to electrification.

“The department failed to adequately challenge Network Rail’s plans to carry out the infrastructure work and, even now, casts doubt on whether electrification work on this and other lines is even necessary.

“The Government accepts it got this project badly wrong and must now demonstrate it has learned the lessons.

“Network Rail admits there are still very significant risks in the Great Western scheme and it is vital these are fully identified and carefully managed.”

Carne explained. “The modernisation of the Great Western line was always going to be a hugely complex job on the world’s oldest long distance railway.

“Yet in 2009 it was committed to, then started long before the scale of the work needed was properly understood.

“The industry has learnt painful lessons and future projects will be planned with more rigour and discipline because of this experience.”

Appearing on the BBC’s Good Morning Wales, committee member and MP for Islwyn Chris Evans admitted there were concerns there would not be enough money to continue with the planned electrification of the Valley Lines.

“The question has got to be asked why are people so angry with the railways, it is quite simple.

“You see them pouring money like this down the drain while rail fares are going up all the time and they are sitting on crowded trains.

“If I was the department and Network Rail, I would be extremely embarrassed by this.”