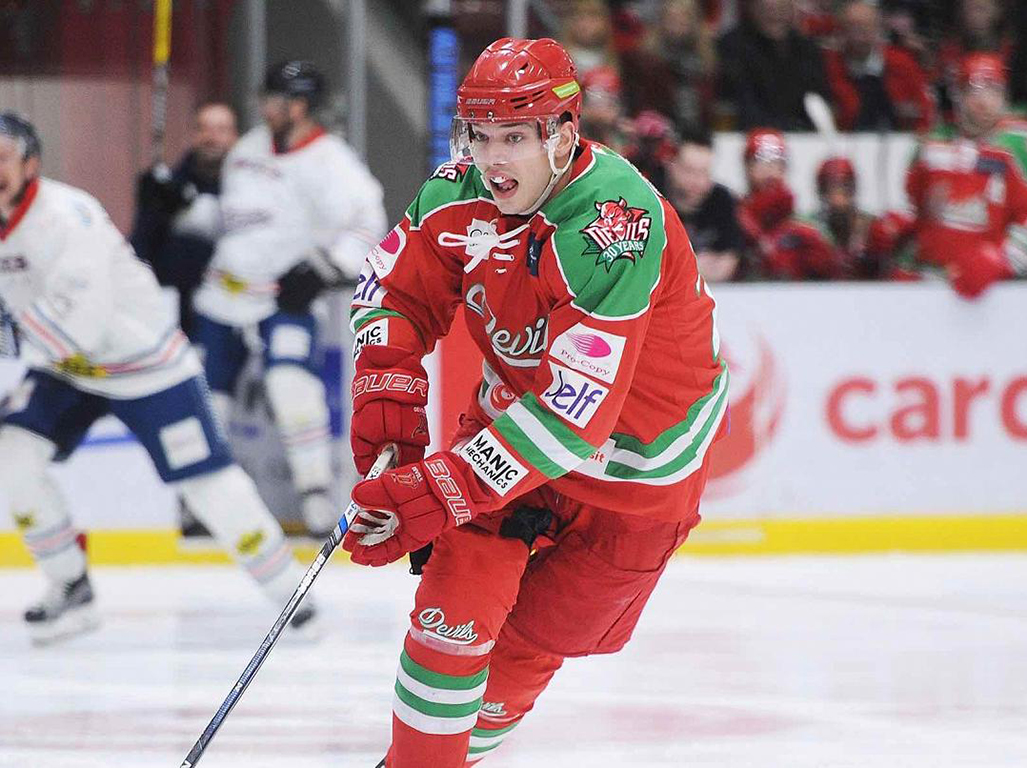 Joey Haddard score twice in the Devils’ game against the Dundee Stars on Saturday.

CARDIFF Devils remain hopeful they will win the league title for the first time after an eventful weekend which saw wins, losses, injuries and the return of an intense rivalry.

The Devils are just two wins away from winning the Elite League for the first time in their history after last Saturday’s victory over the Dundee Stars.

However, the Devils also tasted defeat this weekend after losing 6-2 to Challenge Cup rivals Sheffield Steelers on Sunday.

Despite the mixed weekend, the Devils remain hopeful that this will be the first year they take both the league title and Challenge Cup, which they won last weekend 3-2 against the Steelers.

They are currently leading the league table with 75 points, five ahead of second-place Belfast Giants. They need two more wins from the last four games of the season to win their first ever title.

On Saturday, they gained two more points to reinforce their lead after thrashing the Dundee Stars 4-1.

After an uneventful first period, both Mark Richardson and Joey Haddad managed to score, giving the Devils two goals in the second period. The Dundee Stars’ Cale Tanaka also found the net, making the score 2-1 as the second period came to a close.

Two more goals in the third period rounded off a confident performance for the Devils. Haddad scored his second of the night while Josh Batch guided the puck around the Dundee Stars’ defence and fired it past their goalkeeper to make the final score 4-1.

Despite their strong performance against the Dundee Stars, Devils fared worse against the Steelers the following day in Sheffield.

The two teams appeared to be setting the stage for a close match in the opening period, with both the Devils’ player-coach Andrew Lord and Steelers’ Robert Dowd scoring in the first few minutes to make it 1-1.

However, less than two minutes later, Devils’ Ben Bowns was forced to leave the match with an injury after his teammate Andrew Hotham was pushed into his own goal and fell on him. He was replaced by Thomas Murdy. Bowns down on the ice after his injury.

Powerplay opportunities in the second period gave both teams a second goal. However, a goal by Levi Nelson gave the Steelers a momentum that refused to let up for the remainder of the game.

Over the next two periods, the Steelers dominated and scored a further three goals to make the final score 6-2.

Andrew Lord believed the team underperformed in their match against Sheffield.

“They obviously had a game plan to get under our skin and we didn’t handle that as well as we normally do. We’ll obviously address that this week.

Lord also said he hoped Bowns would be fully recovered for the last four games of the season.

Next weekend, they will be facing the Fife Flyers at home as well as the Sheffield Steelers away once more. The last weekend of the season will see the Devils clash with second-placed Belfast Giants twice.