TV star and 999 services give Ely teenager a dream birthday 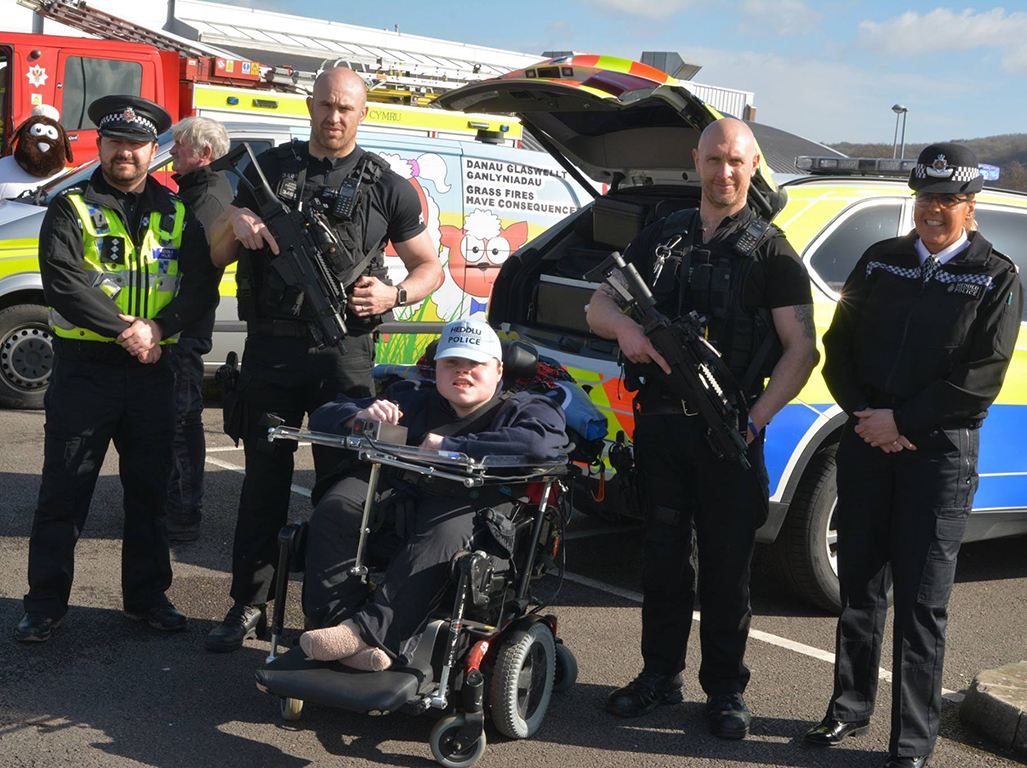 AN 18-year-old from Ely with a passion for the emergency services has had a birthday like no other with help from new friends across the world.

During the visit to Bridgend police HQ he was awarded the title Chief Constable Morgan. Days before his home in Caerau was recognised by South Wales Fire and Rescue Service as its “52nd and a half” station.

On Thursday Casualty star Charles T Dale was a guest at party at Western Leisure Centre along with 30 emergency service vehicles from as far away as Manchester and a fly-over by a Wales Air Ambulance. John Morgan with some of his birthday presents

“We had a police escort from our house to the event and everyone there had their blue lights going.  When John came out of the bus, [Charles] made a beeline straight for him and stayed by his side for about three hours,” said John’s father Paul Morgan.

“John is a big fan of Casualty, we all are in this house,” he said, adding that the family often wait outside the studio in summer to meet the cast.

Charles Dale, who played Big Mac in Casualty until his last episode in June, said: “It was great to be part of such a fantastic day. That all the crews managed to turn up at the same time was amazing and the sun shone!” John has thousands of items of police and fire service memorabilia and hopes to break the Guinness World Record for the largest collection of its kind. He has received police badges and gifts from around the world to join his collection.

“It’s unbelievable with the gifts we’ve received. We just haven’t got around to photographing everything like we usually do,” said Mr Morgan.

“Today he’s had another parcel from a New Zealand with a firefighter hat. People really enjoy sending it to him because of the sheer look of excitement on his face,” he added.

“He was gobsmacked. He won’t forget this, it has been a really big day for him. It may not be until a week later but he’ll tell you everything about it.”

According to Mr Morgan the only way to display the collection is to use a shop display rotation system organised by John’s mum.

“We could do this for months on end and you wouldn’t see that same one twice. We’ve got several thousands in the collection, it’s everything from small tie badges through to full uniforms,” he said.

Prize items in John’s collection include an American firefighter hat used in 9/11 and a tin of M&Ms signed by Barack Obama during his NATO 2014 visit to Cardiff. Pieces are donated through a Facebook page set up by Mr Morgan to spread awareness about John’s mission.

“I ask people to share the page with their personal friends in emergency services or share it to the services themselves and that’s how we grow,” he explained. The 18-year-old with some of his collection

“We’ve had that much success with the last show we’ve been asked by those who attended if we would make a public show next year and get different people involved,” said the 52-year-old from Bishopton Road.

“We’re going to give it a few weeks and then we’re going to start looking at this event and raise money for Ty Hafan.”

John’s passion for the emergency services started when he was three thanks to his dad’s previous job driving a fire engine for proms and children’s parties.

“My wife asked if I could pick them up from McDonald’s one day. John rode from Newport Road all the way to Canton singing Postman Pat though the Tannoy system,” he said.

Mr Morgan’s new mission is to raise enough money to buy John a new bus due to the rising costs of fixing their 15-year-old vehicle.

“We would take John on as many trips as we could but we are limited with the old bus,” said Mr Morgan. “It’s constantly breaking down so we’ve set up a Just Giving page to get a new one.”

“We do rely on it. We need it to transport John to school and then the shopping trips for everything we need to get in the house. He can’t stop in the house alone.”

For the Morgan family a new bus would also allow them to go on longer trips, since their current vehicle lacks a powerpoint to charge John’s ventilator.

“There’s only a three-hour life in the [ventilator] battery so we have to stop and find somewhere to charge it up,” said Mr Morgan. “We’ve even talked to the NHS to see if they can give us a spare battery to change.”

We’re really pleased to have been able to come along and celebrate John’s special day. Happy 18th from all at #TeamWAST ? ? ? @PAULMORGAN999 https://t.co/6zZ0doKN0L