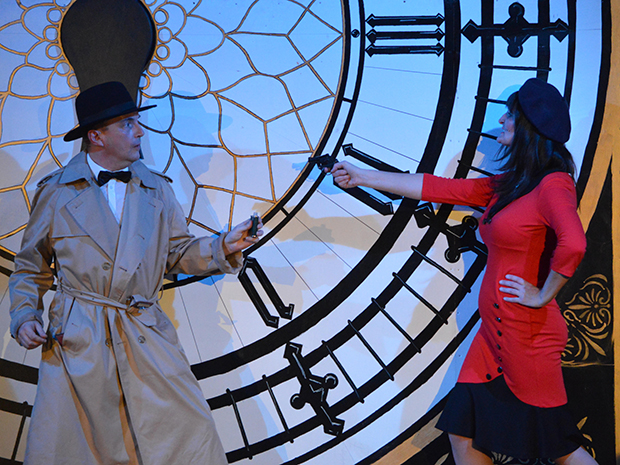 Based on the 1940s BBC Radio thriller and its follow-up film, Dick Barton follows the attempts of criminal mastermind Baron Scarheart and his alluring accomplice Marta Heartburn to take over Great Britain. How? By slipping a little something into the tea supply… From Jane Austen to femme fatales, and blossoming romance to drug-addled love slaves, this is a musical that can’t be tackled halfheartedly. However, playing to a packed auditorium, the cast were polished and confident – throwing their all into a performance that left the audience giggling like schoolchildren.

Phil Groves was bold and flamboyant as Bavarian baddie Scarheart, while Joanne Yurs’ Marta Heartburn seduced not just Dick but the whole theatre.

Meanwhile, Peter Griffiths’ titular special agent was gallant and suave. Well, most of the time. Reduced to a gibbering mess by the Bavarians’ “special blend,” his naivety was endearing – and kept things from descending too far into debauchery. Special mention must go to Lynne Webb, whose piercingly clear voice as Lady Laxington played second fiddle only to her wickedly funny stumbles around the stage after one too many spiked cuppas.

With an expertly performed setlist, impressive set decoration and regional accents galore, it was a play that successfully tiptoed the line between droll and daft. The deadpan punchlines and mostly on-point reactions saved this musical comedy from becoming a farce, and the crowd reactions showed director/producer Wayne Vincent had judged the mood perfectly in his preparations.

Dick Barton might leave us on a classic cliffhanger, but with 61 years of Cardiff performances behind them, it seems SOAS are a safe bet for their dedicated fan base. And we know what’s in the pipeline for the next two days, anyway – as they’re doing the whole thing all over again!

Tickets for Friday night or Saturday afternoon are available on Ticket Source or by calling the box office on 029 2065 9920.