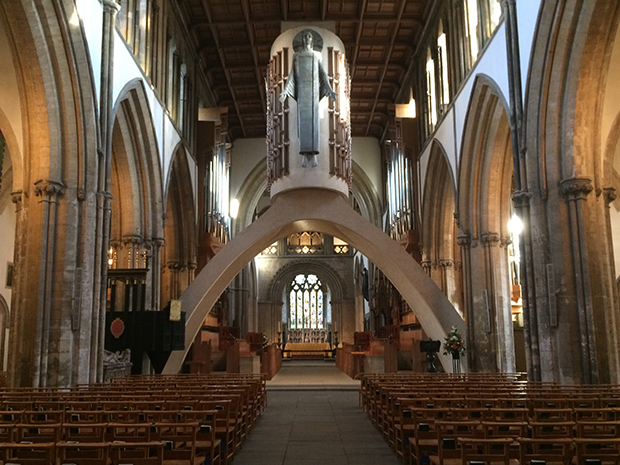 Sue Smith, coordinator of the cathedral’s Christian Aid Week, said the seven committee members were “extremely pleased” with the total.

“It’s astonishing. It’s absolutely marvellous the way people responded,” she said. “I think it’s a reflection of the seriousness of the Christian community at the Cathedral, and its concern with the world outside its doors.

“But we couldn’t have done it without the backing of the Dean and the clergy, encouraging people to give generously.”

The Dean of Llandaff Cathedral, the Very Rev Gerwyn Capon, said: “I am delighted with the tremendous sum raised in this year’s Christian Aid Week.

“It is a testament to the marvellous dedication of the volunteer team, the kind generosity of local people, and the urgency of the vital work undertaken by Christian Aid.” The full fund-rasing breakdown, as shown in The Bell

A full breakdown of the Cathedral’s fund-raising appeared in the November issue of its magazine, The Bell.

The children took part in a 20 Acts of Kindness project, during which they were sponsored to help out at home, be kind to siblings or donate old toys to charity.

Each class also collected loose change and the school held a bring and buy and a cake sale.

Year Six children also organised a basketball shooting competition, and the school council helped to sell ice pops every day, even in the rain. Michelle Reeve, who helped coordinate the school’s events, said: “Llandaff City is a faith school and as a practising Christian I feel that Christian Aid week is our best opportunity of putting faith into action by raising as much as we can.

“Children were so keen to volunteer and be involved at all stages of planning. One girl organised a yard sale raising over £50.

“I was blown away when I received the final total and was so proud that staff, pupils and parents had raised such a large amount in just five days,” she said.

The Cathedral broke a Christian Aid Week record last year when it raised more than any parish in Wales had collected before.

“I don’t think we thought we could possibly do that well again,” said Mrs Smith.

Will the Cathedral try to break another record next year?

“It would be lovely, but we’re not going to have another £4,000 donation,” Mrs Smith said.

“The crucial thing is that we raise as much as we possibly can, in all sorts of different ways, involving as many people as we can.”