Home > Where You Live > Barry > Barry: the Comprehensive that’s going out on a high

Barry: the Comprehensive that’s going out on a high 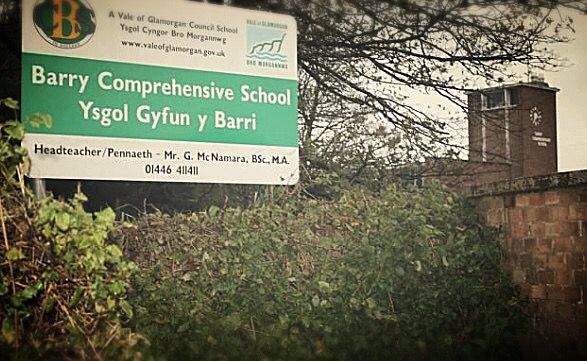 IT’S a grey Tuesday lunchtime at Barry Comprehensive. Daley, Rhys, James, and Emma sit round a table in a small ante-room by the reception with Head of Year 11, John Lloyd.

Though the surroundings are ordinary, this group are anything but.

Daley, an accomplished debater, has twice been elected Vale Deputy Youth Mayor; Rhys participates in its Youth Forum, and is a keen rugby player. When not studying or performing his Head Boy duties, James is a lifeguard. Head Girl Emma plays flute in the Cardiff Youth Orchestra. Both are in the middle of applying to university.

Their compassion, intelligence and spirit might have gone untapped in other schools that Mr Lloyd, a softly-spoken bear of a man dubs “exam factories”.

Barry instead emphasises the importance of cultivating well-rounded students who are confident, both academically and socially.

“Yeah, we don’t want to be robots,” quips Rhys.

This personalised focus is reaping dividends. In 2010, Barry placed in the 13th tier out of 20 in Wales’ school league table ranking.

That system has changed, along with Barry’s academic fortunes. In 2016, it achieved its best ever GCSE results, with 63% of pupils achieving at least 5 A*-C grades, including Maths and English.

Barry’s success is even more remarkable when the makeup of the school is taken into account.

“We’re swimming against the trend. It’s all boys up to sixth form – a group that historically lags behind in academic terms. Then when you look at the socio-economics, we’re taking in some students from some of the most disadvantaged backgrounds,” adds Mr Lloyd.

The reward is a move to a new site this September as part of the Vale Council’s Transforming Education programme, which will see the establishment of two new mixed-sex schools.

It means the decades-old epithet “Barry Comp” will be lost. However, for Mr Lloyd and his charges, the name is secondary.

“Ultimately, it’s about the ethos a school passes onto its pupils; an attitude of engagement across the board – that’s what we want,” said Mr Lloyd.

“If young people are invited to be part of something bigger than themselves, they will give back to the school and the wider community”.

Looking at the achievements these erudite and enthusiastic individuals around the table already have to their names, it is hard to disagree.

Barry, Barry Comprehensive, education, Vale of Glamorgan
You may also like