Home > Sport > On a roll: Keeping up with the Tiger Bay Brawlers 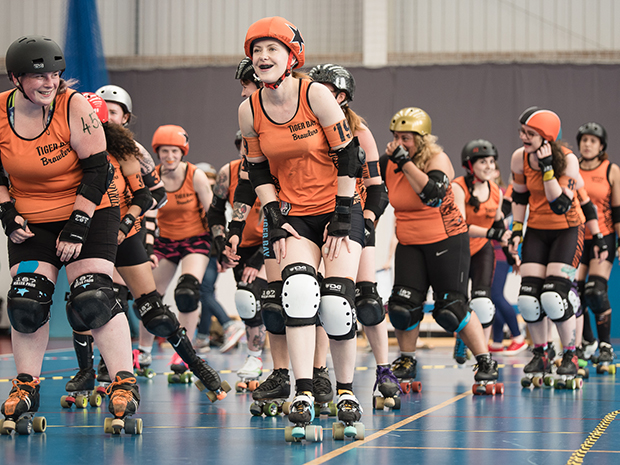 Back in spring – midway through their British Champs season – it looked like the Tiger Bay Brawlers would have to shut up shop, leaving Cardiff Central Youth Club for Cardiff House of Sport.

Eight months later, they’re still in CYCC. For how long, nobody knows but the Brawlers haven’t let this uncertainty slow them down.

After finishing third in the British Champs Tier 1, the team has its sights set on the world rankings. Once Christmas is out of the way, of course.

“You need to prevent burnout,” says management committee member Laura Kemp. “At the end of the day, it’s an amateur sport. We’ve all got families and jobs and things to go home to.”

She’s explaining why the Tiger Bay Brawlers have decided not to take part in the British Roller Derby Champs next year, instead focusing on their international ranking.

It must have been a tough decision to make – after all, finishing third in the top tier of Europe’s largest inter-league flat track roller derby tournament is no mean feat.

The Brawlers beat Leeds Roller Dolls, Bristol Roller Derby and Birmingham Blitz Dames to finish in the top three and were pipped only by Middlesbrough Milk Rollers and London Rollergirls.

Flashback Friday! . . . The last time we met @dublinrd on track was at their home venue in May 2016. Dublin took the win, 156-111 . . . We can't wait to play them again in two weeks, at home, hopefully to set the record straight! You coming? Ticket link in bio . . . #flashbackfriday #rollerderby #brawlerdomination (Thanks to David Howarth for the photo)

They’re currently 88th in the world tables, out of almost 400 teams – although this changes frequently.

“We try and aim for four or five WFTDA ranked games a year,” Ms Kemp says. “That can sometimes literally be to keep up rankings – because if you don’t play, other people are playing.

“It’s a super-complicated system,” she adds – and a quick glance at the WFTDA ranking guide confirms that yes, it certainly is.

Is this why roller derby is still struggling to make it into the UK mainstream? Partly, says Ms Kemp.

“The problem is twofold,” she explains. “Because it’s a women’s sport, we don’t get covered a lot – and if we’re covered, we’re in the features pages rather than the sports pages.” The fact the team are on skates also makes people less inclined to take it seriously, she believes.

However, a few minutes into the Brawlers’ Sunday training session, it’s clear this is one very serious sport.

The first half of the three-hour session is given over to drills: improving agility, getting used to being low, then practising blocks, falls and all manner of moves. After that, they’ll split into teams and move onto gameplay.

Even the drills are wince-inducing, though. “You do get battered,” says Ms Kemp. “I think a lot of people don’t realise there’s such a physical element to it.”

The Brawlers take two months off each year – July and December – to try and avoid injuries and burnout.

This means the team is on something of a wind-down right now. But with seven members (Angie, Dos Santos, Evans, Kemp, NiKilla, Pip Gray and Thrill Collins) on the Team Wales roster for February’s World Cup, they’ll be entering 2018 with a bang.

We are super proud of our very own Thrill Collins who has been announced as captain for Team Wales Roller Derby!…

The new year also marks the start of a new beginners’ training programme.

At the moment, the Brawlers offer two Learn to Skate sessions a week, on a Thursday and Sunday before main training sessions.

“People are welcome to come to Learn to Skate for as long as they want to. It’s quite relaxed,” Ms Kemp says.

But this course will be a more structured feeder into the main team, teaching skills week by week.

And what else is on the cards for next year?

The Brawlers’ B-team has recently reformed too, so they will likely be taking part in a few tournaments.

More cracking photos from our B team game vs. Bridgend Roller Derby on Sunday…

Aside from that, it’s a case of moving up in the world rankings. “Roughly between March and September we’ll play one game a month,” she says.

But after September, things are a bit up in the air.

A petition to save Cardiff Central Youth Club last year failed to gain enough signatures to guarantee its future – and while the Brawlers have the venue until September, it’s unclear whether they’ll be able to carry on training here after that.

“We have no idea what’s going to happen,” says Ms Kemp.

“Our best bet is to hope that someone can take [CCYC] over and run it as a sports venue, but at the moment we’re uncertain.

“We didn’t even know we were going to get the hall until September.”

The team had hastily planned to pack up and move the thousands of plastic floor tiles they bought last year with a Sports Wales grant and laid painstakingly by hand.

“We have to do everything ourselves. We sweep the floor ourselves, wash it down, pick bits up and shift it when it gets bubbles…”

The men’s roller derby team (SWS) also trains here, and they help out with the maintenance.

“Ideally it would be nice if we had our own little venue,” says Ms Kemp. The physical nature of the sport means it is strictly 18+. Photo: Paul Jones Photography Cardiff

Tiger Bay Brawlers might not have a promised home for this time next year, but it’s hard to see them breaking stride, which is reassuring, as it’s clear roller derby plays a huge part in the team’s lives.

“Especially for women and girls, it’s such an empowering sport.

“Roller derby prides itself on being inclusionary. It doesn’t matter what your background is – it just celebrates women for what they can do.”

And in this case, that’s a lot.