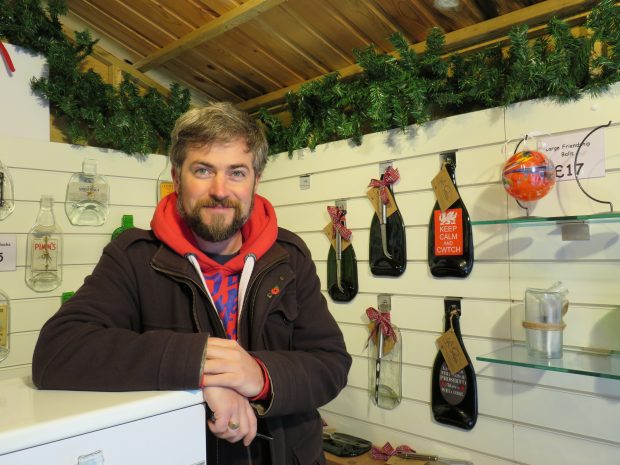 WHAT’S the best thing about Christmas in Cardiff?

We put the question to 10 traders at this year’s Christmas Market in the city centre – and here’s what they told us:

Want to know a little bit more about our featured traders?

These are the people who gave us their views: From Pembrokeshire, Ms Iles runs her own company Seaforth Designs.

She sells handmade countryside and coastal inspired cushions and her range for the Christmas market uses Welsh woven wools and British tweed.

Ms Iles has been a seamstress for 25 years, but it is her first time selling at the Cardiff Christmas market.

She said: “It has been absolutely brilliant and the atmosphere in Cardiff has been wonderful and people have been saying such lovely comments about the cushions.” From Gloucester, he has Welsh connections through his parents who live in Ebbw Vale.

The decorations are heated to 650 to 795 degrees Celsius depending on the effect he wants to produce.

It is Mr Barker’s first time selling at the Cardiff Christmas market and he said: “It’s been amazing and there is a great atmosphere, you get to know the other traders.

“I love to do these longer events because you create an atmosphere with people and create a relationship with them.”

Mr Barker is running his stall until November 25. Ms Matson-Thomas runs her company Koko Kitchen Ltd in Cowbridge and is selling delicious brownies at her stall.

Her company has been running for around three years and has sold at the Christmas market before in Trinity Street.

She said: “We have been busy and it’s early days yet, we are here until December 21” He has been selling at the Cardiff Christmas market for the last seven years.

He said: “My favourite thing about Cardiff’s market is the stalls.”

Mr Jones is running his stall until December 23.

Val on behalf of Sally-Anne Nelson Val is helping run the Condessa Welsh Liqueurs stall, which is selling a wide selection of liqueurs, poteen and aged Celtic whiskey.

The company is based in Anglesey and have been selling at Cardiff’s Christmas market for around 15 years.

Val said: “It is a really friendly city, everyone is so pleasant and it is a pleasure to be here.”

Condessa Welsh Liqueurs stall will be at the market until December 21. From Minehead, Somerset, Mr Beviss owns the company GiftGlass and is selling handcrafted glass gifts including clocks, bowls, cheese boards, lights and oil drizzlers made out of recycled bottles.

Mr Beviss removes the label and melts down the glass using a kiln, he then reapplies the label making them as gifts.

It is Mr Beviss’ third year at Cardiff’s Christmas market and when asked about how he gets the bottles he said: “I drink most of them, I’m a raging alcoholic, but outside of that when I cannot keep up with demand, a lot of them are donated.” Ms Ellis runs Delicia Cakes and Teas and is selling over 150 different blends of loose tea from around the world and different types of Christmas cake.

The company is based in Llantrisant, South Wales and has been in business for seven years.

This is Ms Ellis’ fifth year at Cardiff Christmas market and she said: “It is just a really, really good, friendly and Christmas atmosphere.”

Ms Ellis’ stall will be here until December 23. Based in Worcestershire, Mr Cookson is the owner of Deliciously Catering Ltd and is selling traditional Georgie Porgies Christmas puddings.

This is Mr Cookson’s first time at Cardiff’s Christmas market and sells at nine other markets around the country.

Mr Cookson said: “My favourite thing about Cardiff at Christmas time was the way the market started with the Thursday night light switch on.

“Everybody got in the mood for it, everybody got festive, the music was playing, there was live street entertainment and it was a really great atmosphere.”

Mr Cookson’s stall will be here until December 21. Ollie is selling homemade fudge and fudge related gifts for the company icandy.

It is the company’s first time selling at Cardiff’s Christmas market and they sell all around the country.

icandy will be at the market until December 23.

Janette Morgan on behalf of her son Paul Morgan Janette Morgan is at the Cardiff Christmas market selling her son Paul Morgan’s products from his company Uneek Workshop.

Mr Morgan’s company based in Cardiff sells original wooden products such as bowls, vases and picture frames and all are made by Mr Morgan himself.

The family have been selling at the Cardiff Christmas market for around five years.

Mrs Morgan said: “You can’t buy the products anywhere else, he doesn’t like traditional things.

“My favourite thing about the market is in the evening, when all the lights come on – it’s got a real buzz to it then.”

Uneek Workshop will be holding their stall until December 23.