Home > Where You Live > City > Is it Black Friday or just plain Friday?

Is it Black Friday or just plain Friday? 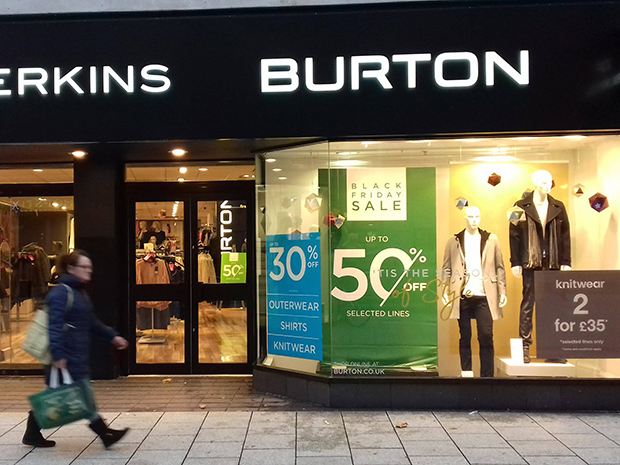 Sales on the Cardiff High Street

CARDIFF shoppers will join the national frenzy to grab a bargain on Black Friday this week. It might be an American import, but five years since arriving in the UK the event is firmly established in the retail calendar.

Traditionally associated with electrical items, Black Friday has morphed into a day on which scenes of shoppers fighting over TVs and queuing for hours outside stores are not uncommon.

This year, Black Friday is on November 24, the earliest it has fallen in recent years and, for many consumers, it comes before payday. It is no longer just a single day of bargains, but a week during which Cardiff shoppers are tempted with discounts on everything from clothing to skiing holidays.

It has even been extended to Cyber Monday on which shoppers are offered online-only deals.

So how much did we spend on Black Friday last year?

Eleanor Parr, of GlobalData, said: “In 2017 we expect more retailers to extend their promotional calendars to include the whole week before Black Friday in an attempt to stimulate demand as they continue to struggle this quarter. Furthermore, as more retailers advertise their Black Friday deals early, other players will be forced to participate to remain competitive.”

That is certainly true in Cardiff, where stores such as Run and Become on St Marys Street are running a 15 per cent-off promotion across their range. Angela Speight, the deputy manager at the independent running store, said November is usually a quiet period and the promotion is offered to existing customers through their e-leaflet.

“We can’t really compete with the likes of Sports Direct, and this is a way to encourage people to come in. Its not really a Black Friday promotion,” she said.

Last year, Britons spent a record £5.8 billion over four days between Black Friday and Cyber Monday – a 15 per cent increase on the previous year, according to VoucherCodes and CRR.

A survey last month showed that, on average, Brits will spend £304.08 each on Black Friday and Cyber Monday sales this year.  In Cardiff, we will spend £192.14 each compared to Londoners, who expect to spend £533.53 – nearly three times as much.

*Figures from a survey of 2,009 British adults commissioned by finder.com/uk and conducted by Mortar London in October 2017

This year, British shoppers are expected to spend £3 billion on Black Friday, according to price comparison site GoCompare.

But who are the winners and the losers during all this?

Are shoppers really getting the best deals for their money?

And are all stores benefitting from the extra cash being splashed around?

We went out onto the streets of Cardiff to ask retailers and shoppers just exactly how they plan to spend Black Friday and whether they think the hype is all it is cracked up to be. David Thomas is the owner of Jon Ian Shoe Shop and will have worked there for 48 years next February. He has never offered any promotions for Black Friday and does not think that the sale period affects his business at all.

“We have one or two customers coming in asking ‘What are you doing for Black Friday?’ but it really is a most peculiar attitude.  It’s an internet phenomenon which has come from America but it doesn’t worry me.”

Camera Land is a specialist independent store selling cameras and accessories. It does not offer any special deals for Black Friday. Karl, who works behind the counter at Camera Land, explained that they were a lot busier than usual during Black Friday in 2015 and were caught unawares.  But last year he said “the rush seemed to be spread over the whole weekend”.

He anticipates that Black Friday 2017 will be similar. Wally’s offers a range of speciality foods, from cheese to chocolates. It does not offer any promotions for Black Friday, and said that “Black Friday doesn’t affect us at all. It’s all about the big electrical shops”. The shop window at Princes and Paupers

Josh Barber from Princes and Paupers specialises in vintage wear, such as British tailoring, tweed and denim. He described how shoppers seem to be holding off their purchases before Black Friday. He told The Cardiffian that: “In the last two weeks we’ve noticed a down trend in sales. We are hoping in the next two or three weeks for that to go back up in the lead up for Christmas.” Sobeys Vintage Store sell a range of clothing and don’t run a specific Black Friday promotion.  They told us that they are going to run a “Winter warmer event, where we’re going to be opening later, and tweed items and jumpers will be on offer.”

When it comes to the effect of Black Friday to their business they said:

“I would say generally speaking, it probably does leech off from us to a certain extent. People are always looking for the best possible deal. And I think the price will sometimes catch their eye. Linda, the shop floor manager at House of Fraser, was setting up the Black Friday promotions when we visited and told us she had already seen a noticeable increase in footfall in the store over the weekend and Monday.

The store is offering 40 per cent off across their range throughout the week.

“It was traditionally just the electrical department but it has spilled over into homeware these days,” she explained.

It seems that the hype around Black Friday does not extend to the smaller retailers. According to a GoCompare survey earlier this month, only 21 per cent of respondents said they planned to visit the high street over the discount shopping weekend.

“In the run up to Christmas, FSB Wales is asking people to think about the power that their Christmas spending has in their local community. Choosing to shop local, and to look to small businesses for Christmas presents and food, means investing in local jobs, supporting local high streets and investment in the diversity and vibrancy of your tow,” she said.

As our overall spending increases, our shopping habits seem to be changing. ChannelAdvisor reported that 64 per cent of purchases took place on mobile devices last year, compared to just 48 per cent in 2015. John Lewis saw a spike in sales between 8am and 9am as people shopped on their way to work. Compared to 2015, Vouchercloud reported a 46 per cent increase in pre-6am traffic, and 208 per cent increase in traffic at 5am on Friday morning.

Argos’s biggest trading hour was between midnight and 1am with 15 orders every second.

The Cardiffian asked shopper Maria, a second-year sociology student in Cardiff, whether she was planning on changing her habits for Black Friday.

“I’m just treating it as normal, I might go and see what’s on” she said.

I think it’s a good thing, you can get all the sales. But it’s quite bad because loads of people will be there. It’s going to be a bit hectic, and people go a bit nuts.” Maria (left), sociology student, tells us how she plans to spend Black Friday

Is all the hype around Black Friday worth it?

Salesforce Commerce Cloud’s Jamie Merrick said that UK consumers saw prices cut by only nine per cent during Black Friday last year. The consumer company Which? reported that 49 per cent of Black Friday “special offers” from 2016 were actually cheaper on other days.

According to PwC research, more and more retailers participate in some form of promotional activity over the Black Friday period, but a third of these will revert to full price during the key early December trading period.

The Cardiffian recommends shopping around for the best deals. Canny shoppers can use ‘camelcamelcamel’ to check the price history of all items on Amazon, and decide whether the price discount is worth it.