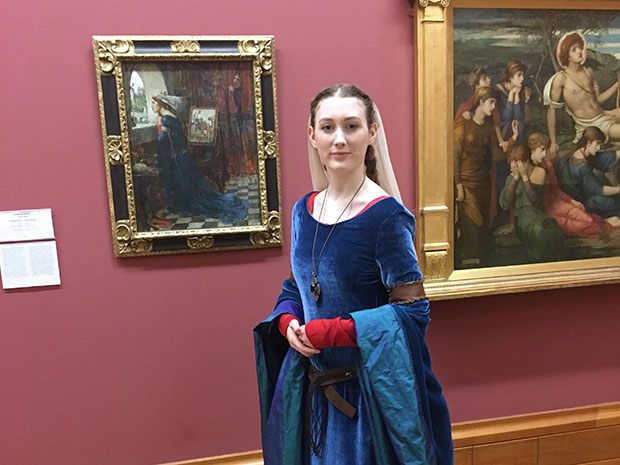 ART was brought to life at the National Museum as students re-created costumes shown in the portraits.

Seven students from Coleg y Cymoedd made the historical costumes depicted in portraits from the museum’s art collection.

The students, who are in their final year of the BA Costume Construction course, were each assigned a portrait and made the costume shown in the painting.

Models wearing the costumes stood with the students in front of the portraits, which range from the late 17th century to the early 20th century.

“I was assigned Dorelia McNeill in a Feathered Hat by Augustus John,” said Martha Okon, 22, of Nantgarw.

“From that, I gathered different clips from different costumes and outfits that would have been worn at the time and put them together to make the costume of Dorelia McNeill.”

The students started making the costumes in September and had to choose models, take measurements, research and source the fabrics and make the costumes so the models could easily move in them.

They were also tasked with making the undergarments of the costumes which included corsets and side panniers – hoops worn under dresses during the 17th and 18th centuries to extend the width of the skirts.

“We tend to use family and friends because it’s easier for you and the model as it’s quite a hands-on thing,” Miss Okon said.

“It’s a really, really fun thing to work on.”

The one-day event, which took place on Sunday, also featured a fashion show in front of the 246-year-old Sir Watkin Williams-Wynn organ after the costumes were displayed.

Lloyd Llewelyn-Jones, Professor of Ancient History at Cardiff University, provided a commentary on the costumes and paintings and selected a winner of ‘Best Costume,’ for the re-creation he thought best interpreted the assigned portraits.

Lee Phillips, of Bridgend, won ‘Best Costume’ for her re-creation of Fair Rosamund, a 1916 painting by John William Waterhouse.

The painting shows an Edwardian interpretation of medieval dress, so Ms Phillips said she had to take both periods into consideration when making the costume.

“I used to work with deaf and blind children before freelancing as a dressmaker,” said Ms Phillips.

“I was attracted to the course because of the hands-on, construction side of it. I feel it has really allowed me to expand my skills as a dressmaker.”

The college partnered with the museum to organise the ‘Fashion in the Frame’ event, which took place on Saturday.

“We had an idea to bring the paintings to life, to look at the sitters and the characters within their context,” said Ms Thomas.

“They take a 2D visual and make it 3D, and I thought that was just another interesting way to tap into the Welsh bit of the museum.

“Last year it was so successful, so we’re here today to make it into an ever-growing, even better thing.”

Elen Phillips said the Costume Construction course has been coming to St Fagans for over 10 years to look at the historic dress collection.

“This is predominantly to get them comfortable and alive in historic dress and give them tips on how to deconstruct and look at the materials and techniques used in historic dress,” Ms Phillips said.

“I’m a dress and textile curator and used to seeing historic dress flat in a drawer or modelled on a mannequin.

“You never ever get to see how that costume drapes on a real body, how it moves when you walk, what noise the fabric makes, how the wearer felt in it. Re-creation is the closest we’ll ever get in asking these costumes to speak to us.”