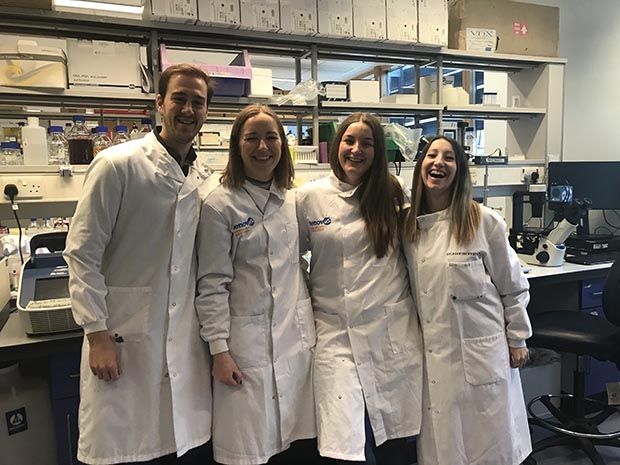 THE University Hospital of Wales opened its doors to students, research fellows and supporters for a lab tour to mark World Cancer Day.

A virtual reality video, two different lab tours and a presentation by research fellows and PhD students from Cardiff University helped to raise awareness of research. The tour, hosted by Tenovus Cancer Care, also stressed the importance of funding.

Speaking about World Cancer Day, Sarah Galloway said that it is important both personally and professionally. Her grandad died from lung cancer when she was four years old.

Miss Galloway, a fourth year PhD student at Cardiff University’s School of Medicine, said: “It was that classic case of someone who was otherwise healthy – he didn’t drink, he didn’t smoke. I questioned why that happened to people who were stereotypically healthy.

“It’s something that I was always interested in in school. I did an internship and wanted to try to help people and find out why people get cancer.

“Research is chronically underfunded, so World Cancer Day encourages people to give a little back, whether that’s money or volunteering.”

“It is good to always have a conversation about cancer, for everyone to be aware and look after themselves from a health perspective. If World Cancer Day helps that, then I think that’s great,” said Miss Galloway.

In just over a week, Tenovus is partnering with Cardiff Science Festival to launch an escape room using their own research. After the festival, it will be a permanent feature to engage members of the public with their work.

Dr Whittaker said: “There’s an escape room happening in a week and a half, which is a brand new project using Alex’s research. It will then become a permanent thing. It will show the general public how we spend the money that our supporters donate.”

“It is a great idea. It’s not just an escape room, but about the research that we put into it,” said Miss Galloway.

You can find out more about the escape rooms here.