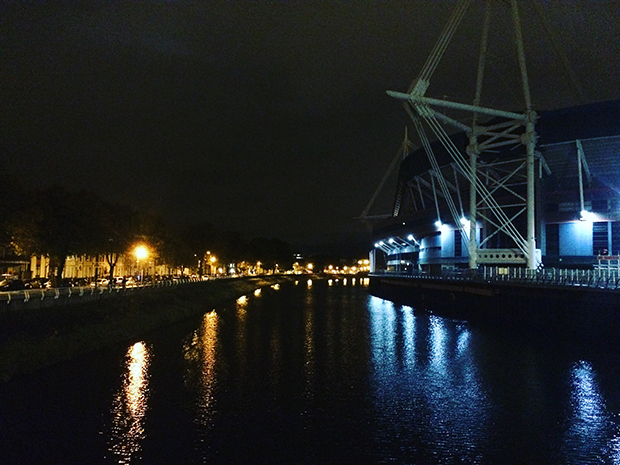 The Taff at night: dark routes can be dangerous for badly equipped cyclists.

SUMMER is easy. You can tell who the real cyclists are when wet weather and dark nights set in.

So Love To Ride, an online platform encouraging more people to cycle, has launched an advent calendar of rewards for those braving the elements.

The December initiative called Winter Wheelers will give out goodies from industry brands like Proviz, Blaze and Torch.

Prizes range from reflective clothing to innovative helmets that provide 360 degree visibility on the road, plus there are two draws for £500 to spend at a local bike shop.

Mr Windle added: “Last year we were blown away by the response, with almost 10,000 people taking part and lots more new and occasional riders than we anticipated.” To get involved, download the Ride Report app and sign up. Cycle any day between December 1 – 25 and log it with the Love to Ride profile to enter the daily draw.

Mr Windle said: “With decent lights and some basic waterproof clothing, people can switch to riding to work in winter and discover the many joys and benefits of getting around by bike, which can make you happier, healthier and wealthier.”

South Wales Cycling group, whose members meet up for frequent rides throughout the year, offer this advice on cycling in winter:

Be careful of puddles

Gareth Thomas, a group ride leader, said:  “I know from experience that you can’t see the bottom of a puddle and then you go over your handlebars, if you pick a dodgy one.”

Another cyclist, who did not want to be named, agreed: “Be careful riding through puddles, it’s difficult to see in the dark what’s beneath the water. I found a huge pothole last year and flipped over the handlebars dislocating my shoulder.”

“Watch out for ice – many minor roads and cycle paths aren’t gritted and can be very slippery. I cracked a rib falling off my bike on the icy Taff Trail a couple of years ago!” said another.

Other members said they preferred to use roads rather than cycle paths that are often covered with mess, including ice, wet leaves and grit.

Member Clive Taylor said: ”Pressure needs to be applied to the local authorities or Sustrans so that cycling routes are maintained to a satisfactory and safe level. I’m fed up with riding on cycle trails that are full of potholes, tree branches, broken bottles and dog mess.”

Sustrans is an organisation which works with communities and policy makers to encourage safe travel.

“I did it in the summer and although I’m pretty experienced, I learned loads. Most adults who sign up do so after an accident. If they’d had it first they have well have been equipped to avoid collision,” he said.

Use the road confidently

Mr Thomas said: “Drivers think we belong at the side of the road. It’s safer to us to ride wider, avoiding the potholes and being more visible.”

Ken Barker agreed: “Leave plenty of space following vehicles in traffic.
“Drivers are often inattentive and don’t make allowances for cycling conditions. Keep out of the gutter, especially when there are railings kerbside. You need an escape route and you don’t want to be going the other way in an emergency.” The South Wales Cycle group encourages others to be confident and not to hug the gutter.

Peter Carroll said: “Assume that everyone else, whether pedestrian, driver of a car, motorcycle or an HGV, or even another cyclist, is a complete fool with poor eyesight, no reflexes or judgement, nor perception of distance.

“Also that they are likely to be of unsavoury and villainous nature with no respect or regard for their own or anyone else’s safety. Assume your lights will run down or malfunction and carry spares, and prepare for the worst possible weather conditions. Do this, and the likelihood of coming to any harm will be considerably reduced.”

Sustrans have created an online mapping tool which allows cyclists to find safe routes through the city. Find it here. And of course, lights!

A woman, who did not want to be named, said: “Enough lights so you resemble a UFO. Good ‘be seen’ lights on the helmet and rear and a good ‘see where you’re going’ light on the front.

“Good bright colours too. If you’re cycling with a dark rucksack, cover it in something bright. My winter bag has a pull out high-vis jacket.”

Members of the group warned against overly bright lights as they may dazzle others – especially head torches as they are at eye level.

Another group member added: “Dip don’t dazzle. Like a driver on the road with their headlights. Often lights are not enough. Wear some reflective items on your front and back.”