Devils on top form as Belfast Giants come to town 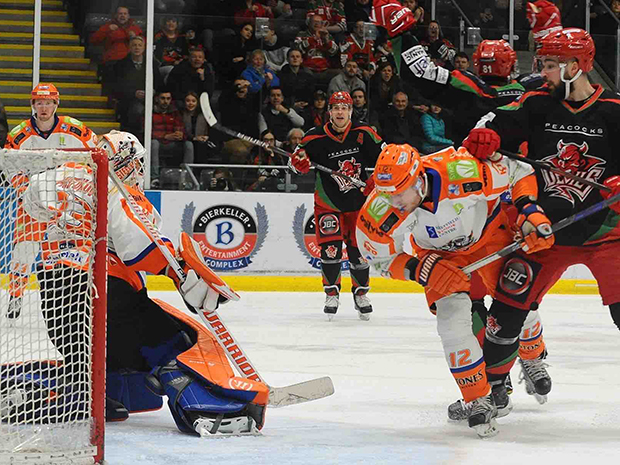 CARDIFF Devils will be flying high from their midweek wins as the third placed Belfast Giants in the EIHL make the trip to Wales.

Sunday’s game, which acts as a prequel to the 2018 Challenge Cup Final on 4 March, has already been sold out after a run of five straight away fixtures for the Devils.

On Wednesday night the Devils saw out a tricky fixture against the Sheffield Steelers, holding their Yorkshire rivals to win 3-0 after scoring all three goals in the first period.

The Devils got off to a great start after Joey Martin was able to score simple tap in from a Joey Haddad pass after just 30 seconds of play to put Cardiff 1-0 to the good.

Haddad then found Matt Pope in space at 8:22, with the Canadian giving Steeler Goaltender Ervins Mustukovs no chance at all as Cardiff doubled their lead.

The third goal at 16:30, a rebound scored by Andrew Hotham, gave the Devil’s a good advantage going into the final two periods.

A couple of powerplay chances for the Steelers in the second period proved fruitless as a stellar performance from Devil’s goaltender, Ben Bowns, kept Sheffield at bay.

Victory was finally secured with Cardiff weathering the Sheffield storm in the third period to seal a shutout victory, with Bowns stopping all 26 shots that came his way.

The weekend’s results leave Devils top of the table, eight points clear and with a game in hand over Manchester Storm.