Home > News > I wanna be like EU: Boris impersonator unites both sides of Brexit

I wanna be like EU: Boris impersonator unites both sides of Brexit 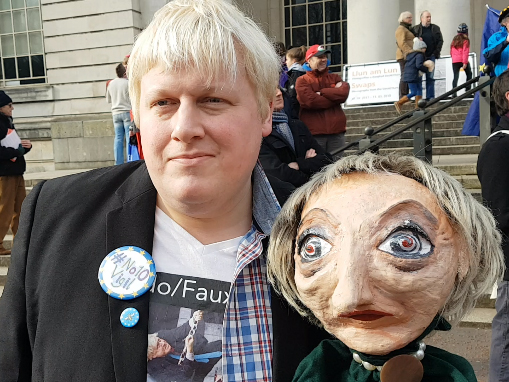 A CAMPAIGN that crowdfunded over £16,000 to drive an anti-Brexit bus around the UK landed in Cardiff, accompanied by a singing Boris Johnson.

The Is It Worth It? campaign is a grassroots initiative from the Camden for Europe group. They pose one question: Is Brexit worth it?

A Boris Johnson impersonator, Drew Galdron, sang pro-EU versions of Miley Cyrus’ Wrecking Ball and The Jungle Book’s ‘I wanna be like you’, with the words changed to ‘I want to say in the EU’.

Speaking outside was Amelia Womack, deputy leader of the Green Party and founder of Another Europe is Possible, Geraint Talfan Davies, director of Wales for Europe and Liberal Democrat councillor Joe Boyle.

The campaign uses figures from the leaked Brexit impact assessment, claiming a hard exit will cost the UK £2,000m a week compared to £800m a week for a softer deal.

John, a protester in the crowd, said these figures are discredited.

He said: “Why are you using figures that are discredited? This is the same government that said the assessment didn’t exist, that said we would have masses of job losses.”

Mimicking the official Leave campaign bus, which claimed there would be an extra £350m for the NHS if the UK voted leave, a figure of £2,000m per week was written across the red bus.

Sarah Churchill, 60, who was there supporting the campaign said: “I’m here today because we’ve got this bus that actually has the truth written on it. If we were fighting a war, we wouldn’t expect to lose that much.” Sarah Churchill, 60, and her husband, who is Danish, are pro-EU and want another referendum where voters are more informed

The Greens’ Amelia Womack called for a ratification referendum – a second referendum to confirm the Brexit deal.

Members of the crowd debated as pro-EU members spoke about staying in Europe and keeping the country as it is but Brexit supporters said the UK would not simply disappear.

One man, who did not wish to be named, said: “How will this impact Cardiff? It depends on the deal we get with other countries and the EU, but I actually think the government is approaching this calmly and responsibly. The people here today waving European flags are not thinking about the national interest.”

But tensions eased as Mr Galdron sang and danced.

Is It Worth It? crowdfunded an average of £24 from over 700 people to fund the UK wide tour.

Anti-Brexit, Boris Johnson, brexit, Bus, cardiff, EU, European Union, Is it worth it, julie morgan, labour, politics, protest
You may also like