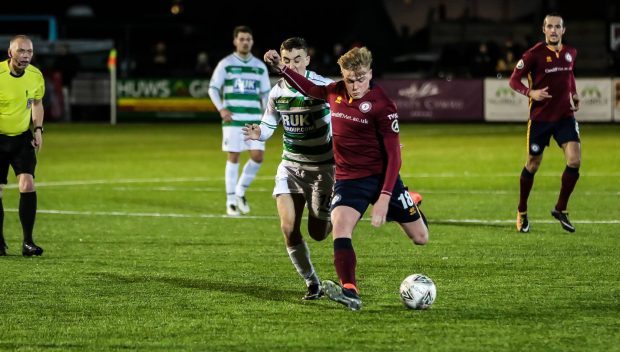 CARDIFF Met and Barry are hoping to improve their chances of European football, but it is the men from the Vale who had the better of last weekend’s games.

Met travelled north to Bala hoping to recover their form which has faltered since the turn of the year and keep themselves in the running for a second place finish and an automatic place in the UEFA Europa League.

However, these hopes were dashed as the students fell to a 1-0 defeat at Maes Tegid. In contrast Barry won 4-1, despite falling behind against Llandudno.

An error at the back gifted Les Davies the only goal of the game in the first-half. Met reacted well, coming within inches of equalising – only to be denied by the woodwork.

Despite the result, Met manager Christian Edwards was upbeat: “Last week I was bitterly disappointed, tonight I’m very, very pleased with our performance.

“I thought we totally dominated a very strong Bala side and all we didn’t do was score.”

Met are now 10 points behind Bangor City in second and with six fixtures remaining, including two fixtures against champions elect TNS. In May, the top seven teams in the league face off for the final place in the Europa League’s preliminary round.

In the bottom half of the table, Barry Town fared significantly better, thrashing an error-prone Llandudno 4-1 at Jenner Park.

The home side were left fearing the worst when Llandudno capitalised on a defensive mistake to take the lead within the opening minute.

Barry reacted well and quickly stamped their authority on the game, their frenetic pace forcing mistakes from the visitors.

In doing so, he became the first player to score a hat-trick in the Welsh Premier League since 2002.

Speaking about the opening exchanges, Barry manager, Gavin Chesterfield said: “That was out of character and speaking of character, those are tough moments.

“I think, early on in the season, that might have made us crumble a little bit but I think it’s evidence of the growth of the team that we responded in the manner that we did and I’m delighted.

“I think the players deserve huge credit for that.”

Barry are unbeaten since the league split and look well placed to make that seventh spot their own. They can pull six points clear of eighth place Newtown if they win their game in hand against bottom of the table, Prestatyn Town.

Cardiff Met aren’t in action this weekend due to the Welsh Cup Quarter-Finals, but Barry will travel to Prestatyn on Saturday. Kick off is at 1pm