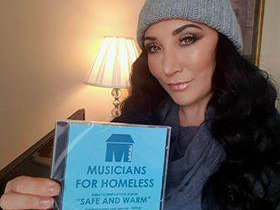 A MUSICIAN has made an album to raise funds for a Cardiff homeless charity.

Bob Ross set up the group Musicians for Homeless last Christmas after deciding he needed to do something to help rough sleepers.

The group will this week donate 50 CDs entitled Safe and Warm to Help the Homeless People in Cardiff.

“I’ve been making albums for over 30 years, so I decided that a compilation album on CD was the best thing for me to do to help the homeless.

“Three years ago I did a similar project about autism called Musicians for Autism to raise awareness and funds for local support groups,” said Mr Ross, 59, of Portsmouth.

Help the Homeless People in Cardiff is a group that collects clothes, blankets and toiletries to give to rough sleepers. Mr Ross is asking the Cardiff charity to sell the CD of 29 songs and poems for £5 to raise funds.

Musicians for Homeless has already donated albums to 28 homeless projects around the country. Mr Ross asks artists to donate original recordings and poems for inclusion.

The founder then supplies and ships the CDs to homeless projects at his own cost.

Rona L Topaz, a singer from London, contributed her poem Us and Them to Mr Ross.

“I decided to contribute because I strongly believe the increase in homelessness is part and parcel of this government’s ideological decisions to keep the UK populace as desperate and as demoralised as humanly possible,” said Ms Topaz.

Mr Ross is hoping to make a second album named Moving On.

albums, cardiff, charity, help the homeless, homeless, music
You may also like