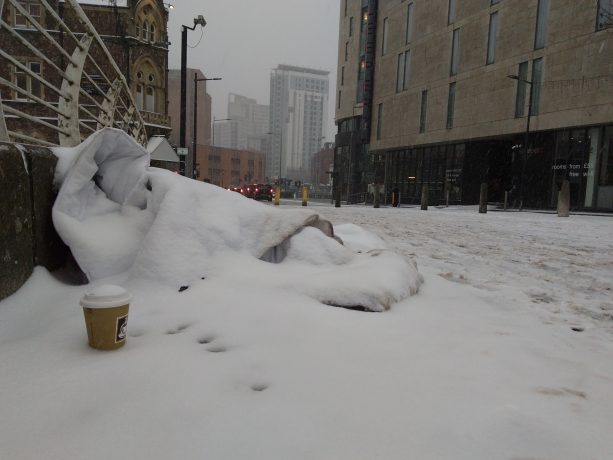 WINTER is a hard enough time for the homeless as it is, but when the snow hit last week they needed more help than ever – step forward Taff Housing Association.

Realising the struggle for Cardiff’s homeless community to try to keep warm and fed when the city was snowed under, a team of volunteers from Taff opened a day centre to care for them.

The centre on Cowbridge Road East, provided rough sleepers with a place to keep warm as the ‘Beast from the East’ set in. Hot drinks and food were also on offer.

Local businesses, volunteers, Community Housing Cymru, Adore Cardiff and Taff Staff members supported the cause and enabled the success of the shelter. The local community proved invaluable, donating items to the centre and offering their support. One homeless man arrived at Taff with soaking wet socks and shoes. Staff took to Twitter to find the man some replacement boots…

Ok, we need sturdy boots, men’s size 10’s ASAP. Deliver to our conference room before 4 today, or the guy who needs them will be outside the co-op. Cmon @CantonPontcanna @PontcannaHub – let’s see if we can do this! Pse RT!!

…and, within ten minutes, a local resident had donated a pair. This was just one example of the “fantastic” donations that followed across the four days that the shelter was open.

Keen to continue their charitable work, Taff are now appealing for donations to their Syrian Relocation Resettlement Project.

Twitter, WE NEED YOUR HELP! As part of Taff’s Syrian Relocation Resettlement Project, four recently arrived families are in need of basic items to begin their life in the UK. We are looking for the following if anyone has to donate: pic.twitter.com/siq3MhwP78

The project will help equip Syrian refugees arriving in Cardiff with basic items to make their start to life in the United Kingdom as comfortable as possible.

Donations have already been flowing in from the local community who have readily given microwaves, hoovers and even washing machines and fridges to name but a few.

More to follow on the Syrian Relocation Resettlement Project next Tuesday.