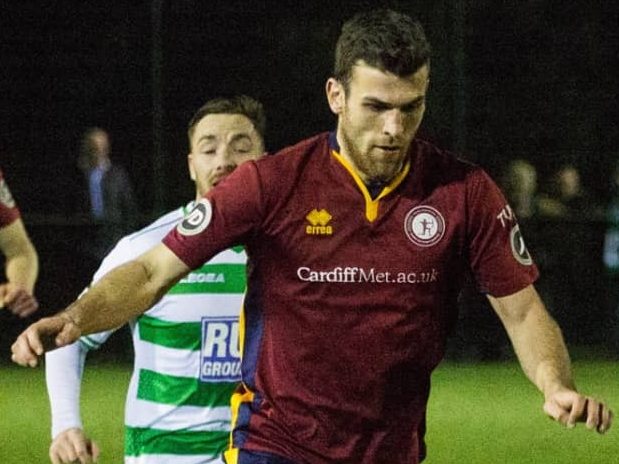 BARRY Town kept their dream of European football alive with an assured victory over Carmarthen.

Newtown, in eighth, now lie six points behind Barry who also have a game in hand. With only five games remaining ahead of the Europa League play-offs in May, it looks highly likely that the team from the south coast will be taking part.

Barry are perhaps fortunate to have come away from Richmond Park with the three points on Sunday. Carmarthen had a whole host of chances but were wasteful in front of goal.

However, the away side showed the grit and determination that has got them this far and, in the 81st minute, Barry were rewarded for weathering the storm as Drew Fahiya slotted home his first goal this season.

Following the game, manager Gavin Chesterfield said: “I’ve got to give Carmarthen Town huge credit, but I think patience was the key and we found a way to win.

“Four from four after the split is really pleasing for us.

“Let’s be totally honest, first year back in the top flight, staying up was success. I think we’ve done that mathematically tonight so I’m delighted but I’ve said all along, the boys will get stronger because they’re learning, learning against good teams, against good players.

“Today is another milestone for us today, to come away, show good patience and find a way to win.”

Should Chesterfield and co achieve their dream, it’ll be their first appearance in Europe since 2003, a 4-2 aggregate loss to Vardar Skopje in the first qualifying round of the Champions League.

That season marked the last in their decade of dominance before the club fell into administration. Their journey from turmoil to serious European challengers is quite remarkable.

For much of the match, it didn’t look like either side would break the deadlock. Both had very good chances but were unable to put them away.

It was Met who did score first however, and they must have thought that Eliot Evans’ 85th minute goal would be the winner but the Archers were denied a famous victory as Kevin Kauber headed home and injury-time equaliser from point blank range.

Manager Christian Edwards was disappointed with the end result but believed there were plenty of positives to take from the game: “It’s a tough one to take but we put ourselves in with a chance of winning it and the boys did very very well today.

“We adopted a certain shape, a certain system to frustrate and I think that we did that but we also looked quite dangerous on the attack and playing two up against them was a bold move but I’m happy that the players were comfortable with that shape.”

The point means Met strengthened their grip on fifth position, granting them a higher seeding for the upcoming play-offs.

Barry, cardiff met, Europa League
You may also like